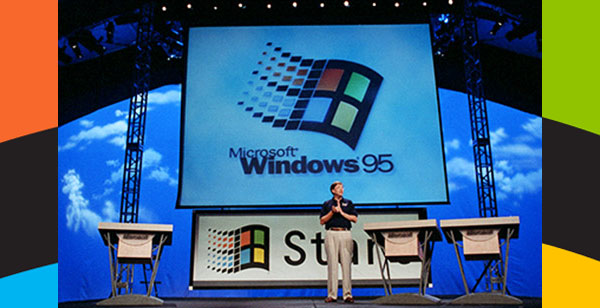 Twenty years ago Monday, Bill Gates officially released Windows 95, ushering in a new era. The operating system featured a graphical user interface, along with a task bar and multitasking support, and it introduced the now-iconic Start button to launch applications. Those Windows 95 features made using a PC a whole lot easier.

The Windows 95 launch also was notable for turning a software release — an operating system at that — into a major media event. Microsoft pulled out all stops, including having comedian Jay Leno share the stage with Gates. The company paid big bucks to use The Rolling Stones’ “Start Me Up” for the ad campaign, too.

The marketing buzz paid off. Customers lined up to get a copy of the new OS as if they were waiting for actual Rolling Stones concert tickets. Microsoft sold some 7 million copies in just five weeks.

Twenty years later, Microsoft is celebrating its Windows 95 success by offering a free download of The Rolling Stones’ song — but you’ll have to rush over to the Windows Store to take advantage of it, as the deal expires at 11:59 p.m. PT.

If you’re not sure how much fun it can be, check out Steve Ballmer and Bill Gates grooving to it during the launch event:

Microsoft has just released Windows 10, and it could mark another turning point for the PC.

It remains to be seen if consumers will embrace Windows 10 as they did Windows 95, said Susan Schreiner, senior analyst with C4 Trends.

“Today many consumers are starting to assess whether they need to update and change what they already have running their computers,” she told TechNewsWorld. “What many have works well enough for them, and to a certain degree there is a lot of consumer fatigue.”

Windows 95 was not Microsoft’s first Windows operating system, but it truly did change the way people interacted with their PCs. The new OS meant that users no longer needed to understand MS-DOS commands to launch programs and access files.

That meant users no longer had to deal with IRQ and other port conflicts. That, along with the new interface, made the computer a whole lot more user-friendly.

“It was really the launch of the consumer PC,” said Rob Enderle, principal analyst at the Enderle Group.

“Until then, outside of some hobbyists and really rich folks, only businesses bought PCs,” Enderle told TechNewsWorld.

“IBM, DEC and Compaq had large business, and Apple had small business,” he recalled. “Consumers had been relegated to Commodore and Atari, for the most part — but they had tried to move to business and failed, while losing the consumer.”

Microsoft continued to refine and update its Windows brand in the years that followed, beginning with Windows 98, which added greater USB support. With Windows XP, which was released in 2001, Microsoft reached its zenith for the brand, selling more than a billion copies worldwide by April 2014, when it was discontinued officially.

Although Windows 95 and Windows XP had been hits with users, Microsoft fumbled badly with Windows ME and Windows Vista — both of which were poorly received and relatively short-lived.

Microsoft returned to form with Windows 7 but then stumbled with its follow-up. Windows 8 was supposed to ease the transition to touchscreen-friendly monitors. Its modern user interface even did away with the Start button — at least initially. Microsoft was compelled to restore it as an option in Windows 8.1 after frustrated users raised a hue and cry.

Microsoft now has pegged its future on Windows 10, going back to some basics while taking the operating system forward. Twenty years later, it is easy to see some parallels in its strategies.

“Windows 95 effectively changed the market from one that was business-driven to one that was consumer- and user-driven,” explained Enderle.

“Ironically, after this move made Microsoft dominant, they spent the next 15-20 years trying to change it back, and effectively gave Apple the market on a silver platter,” he added.

“Windows 10 drifts back to more of a consumer/user model,” said Enderle, “and it attempts to group tablets and smartphones, both of which are more powerful than PCs were 10 years ago, into the same PC class. It is attempting another, largely different, revolution.”

Windows 95 drew some criticism after its launch, with some observers arguing that it wasn’t much more than Microsoft’s take on Apple’s Macintosh OS or IBM’s OS/2.

With Windows 10, Microsoft is again taking heat for appropriating some popular enhancements from others.

“Cortana is really a page out of Apple’s playbook with Siri, but this is just one feature that could break the mold for Microsoft,” noted Schreiner.

“Everyone is looking for a competitive advantage, and Microsoft is trying hard to gets its footing as changes are happening in the OS ecosystem. There are some cool features in Windows 10, but the verdict is still out as to whether it will be a blockbuster,” she said, “and as disruptive as Windows 95.”