3D Printing Gets a Speed Injection

The Gutenberg printing press, which was invented around A.D. 1440, truly revolutionized the world. It allowed more people to have access to books, which until that time had to be manually copied by hand. Today the world is seeing another revolutionary advance in printing technology, but this time in 3D printing. 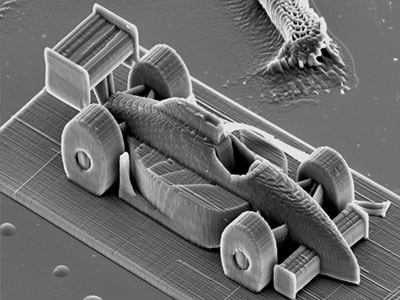 The concept of 3D printing isn’t that far removed from the traditional printing technique of basically casting ink on a page. It just adds multiple layers that build up an object in 3D. In some cases, it exists around multiple compounds that bond together to create a 3D object.

It isn’t actually new — it has existed for more than a decade. However, researchers at the Vienna University of Technology have developed a 3D printer with nanoprecision that uses two-photon lithography.

Essentially, the 3D printer uses a liquid resin that is actually hardened with a focused laser beam. This results in a solid polymer that is just a few hundred nanometers wide, making for an intricately structured sculpture as tiny as a grain of sand, and printed out very quickly.

What this means is that 3D objects can be printed in orders of magnitude faster than other devices, opening up new possibilities for applications.

From Vision to Real-World Applications

Although 3D printing is considered on the cusp of real-world mainstream design applications, it has really been an innovative technology with somewhat limited uses, with many industries relying on 3D printers for development of prototypes.

While many objects have been created in 3D in clay or foam, these have been crafted by hand, and whereas a 3D model could be designed on a computer it still lacked the real-world model. The innovation in 3D printing has allowed the two worlds to merge.

One industry that has relied a lot on 3D printing has been the bicycle industry, to create models for frames that are later be crafted in carbon fiber.

“Aerodynamics have become a leading development consideration in the world of bike and bike component design, and many of the top manufacturers use 3D printers to create multiple variations of a component or frame for use in wind tunnel testing,” Matthew Pacocha, U.S. editor of BikeRadar.com, told TechNewsWorld. “Companies like Trek, Specialized, and Scott have 3D printers on site, and Trek even uses theirs to make full-scale samples of their new frames to prove graphic placement and color schemes.”

3D printing may help design the products consumers use, but more importantly for the researchers at the University of Vienna, the technology could have life-altering benefits.

“The major area for application is medicine,” Florian Aigner, science editor at the Vienna University of Technology, told TechNewsWorld. “With this technology, it should be possible to create scaffolds for living cells to attach and create a tailor-made tissue — and for this, accuracy on a very short-length scale is required. This is why our chemists are currently trying to find resins with better biological properties.”

The printers can now print out at what could be considered lightning speed, but development was not so quick.

“At TU Vienna, we develop resins explicitly for about seven years. However, we could use our knowledge from synthesizing resins for stereolithography, which we develop much longer,” said Jan Torgersen, a researcher in additive manufacturing technologies at Vienna University of Technology.

“These so called scaffolds are polymeric constructs where cells can stick onto,” he added. “The technique is precise enough to make parts resembling the 3D biological environment. Depending on the geometry of the scaffold and the type of cell, custom-made biological tissue can be made.”

New Layers to the Technology

The use of the resin and laser technique could also change the way that 3D printing evolves.

“As this technique is the first true 3D lithography, it is not necessarily limited to a layer-by-layer fabrication process, and it is thus capable of embedding and connecting objects in 3D,” said Torgersen. “We already successfully fabricated waveguides in an existing matrix. These waveguides are very promising for various optoelectronic applications.”

This could open the door to 3D taking off in the home — perhaps in ways 3D TV did not.

“I’m starting to see home 3D printing moving from ‘Wow! I can print out things in three dimensions, like bottle openers and miniature models of my head,’ to ‘Wow! I can print out useful things in three dimensions, like pendulum clocks and quadcopter robots,'” Mark Frauenfelder, editor-in-chief of MAKE magazine told TechNewsWorld. “Eventually, 3D printers will be commonplace in homes, offices and schools, because they’ll prove to be so useful. I’m jealous of my kids!”