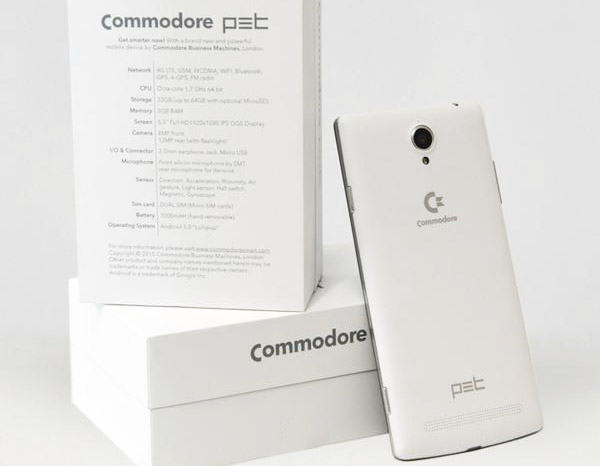 Yet another Android smartphone hit the market last week — but what’s surprising is that it comes from Commodore.

The PET runs on 4G LTE, GSM and WCDMA networks.

Commodore last week launched the smartphone in Europe and is expected to roll it out to the United States at some point, though no date has been announced.

“Boy, this is a strange one,” remarked Rob Enderle, principal at the Enderle Group. “First, Apple brings out a new iPod, and then this. Time machine, anyone?”

Not a Brick House

The Commodore PET smartphone is from Commodore Business Machines, a UK-based firm owned by two Italian entrepreneurs, Massimo Canigiani and Carlo Scattolini, who said they have acquired rights to the brand and trademark for the mobile industry in 38 countries, including the U.S.

“It’s not even the same company,” said Mike Jude, a research manager at Frost & Sullivan, referring to the iconic PC maker.

“It’s a trademark that has shifted hands repeatedly … and you’re not necessarily buying a philosophy and design consistent with the original Commodore’s,” he told TechNewsWorld.

“The Commodore PET is just a rebranded Chinese phone with two free emulators preinstalled,” said Massimo Battaglia, an Italian industrial designer who was credited in some media reports with having designed the phone.

“Google the Orgtec Wa1, which was presented in December for only US$145,” he told TechNewsWorld.

Although he acknowledged designing a concept for the Commodore PET a couple of months ago, “it was completely different,” Battaglia said.

He now emphatically distances himself from the device: “I did not design the Commodore PET, I am not linked with Commodore Business Machines, and I don’t want to be associated with that rebranding operation.”

Memories Are Made of This?

The PET’s tech specs are similar — but not identical — to those of the Orgtec Wa1.

The PET smartphone has a 13-MP rear camera and an 8-MP front camera.

Customized versions of the VICE C64 emulator and the Uae4All2-SDL Amiga emulator for Android are preinstalled.

The PET might appeal to Commodore aficionados, but “I’m not sure how many of us are still alive,” Enderle told TechNewsWorld.

With the right product placement, Commodore might be able to move “a decent number of phones” while the novelty holds, he speculated, but, “unless they eventually do something unique, I doubt they can hold the customers they initially get.”

The device might not make much headway in the U.S., Jude said, because “to get any traction here, Commodore’s going to have to line up a major carrier — and I think it’s going to have a hard time.”