A Fertile Field for Digital Television in Europe

The European broadband, communications and television landscape is not just characterized by intense competition among telephone providers. The cable operators, telcos and satellite providers not only need to keep a close eye on each other, but also players delivering digital terrestrial television (DTT) services.

As of the end of 2007, Europe had nearly 150 million television subscribers, 8 percent growth from year-end 2006. The percentage of households with two-way interactive services capabilities (subscribing to digital cable and telco/Internet protocol TV), however, was only 12 percent of the total television households. This is in marked contrast to the North American market, where digital cable and telco/IPTV services are found in one-third of television households. The European market certainly has room to grow in providing interactive and digital television services. 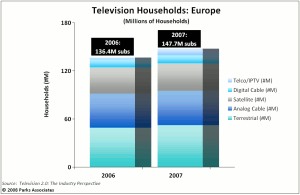 Under the European Union Commission directive for a single European communications market, all of the markets under its jurisdiction face a deadline to switch from analog broadcasting to digital broadcasting by 2012. Terrestrial television is still a major source for viewers in some of the major Western European markets including France, Italy, Spain and the United Kingdom. Almost 55 percent of the television viewership in these markets relies on terrestrial services for television. It is therefore expected that digital terrestrial television (DTT) offerings will play a very important role in the TV market in Europe over the next five to 10 years, even as cable, satellite and telco television providers ramp up their offerings

While inherent market conditions in many European markets where there is strong presence of terrestrial TV viewership favor DTT growth, it is not wholly accurate to portray DTT as an “either/or” offering that could preclude a household from choosing a telco in particular for a bundled services offering. In much the same way that satellite television services are a standard offering for many U.S. telcos, DTT provides the telecommunication service providers a way to sell bundled services — including video services — at competitive prices. A prime example of this type of bundle is the BT Vision service.

The aggressive local loop unbundling taking place in Europe is creating a new class of CLECs (competitive local exchange carriers) that do not have their own video distribution infrastructure. They may also take advantage of DTT services to offer bundled services that include video, VoIP (voice over Internet Protocol) and broadband features.

These market dynamics have created a dynamic market for DTT offerings.

In spite of a relatively slow growth in subscriber base, cable operators still control approximately 36 percent of the television market spread across Western Europe. One key aspect of the European cable market is that almost 80 percent of it is served by analog cable. In a sense, Europe offers a potentially fertile market for cable operators willing to invest in cable plant upgrades and who see an opportunity in building significant revenue streams by moving customers from analog to digital television services and by bundling robust broadband and voice offerings with video.

Although cable operators have struggled in recent years (with notable reorganizations in the U.K.), there is a growing consensus among operators that investments need to be made to upgrade mainly analog networks for digital services. These investments will certainly impact their competitors’ decisions. Two key areas in which the cable operators intend to invest significantly are infrastructure upgrades and customer service. A recent study by the Center for Customer Driven Quality at Purdue University indicated that 68 percent of the customer loss was driven by service experience. This has renewed the cable operators’ focus on enhancing their commitment to customer service.

Satellite services in Western Europe have exhibited a healthy growth of 5 percent catering to approximately 23 percent of the total market in that region. The growth in areas where there is a significant digital divide due to lack of broadband penetration is expected to be higher.

Satellite operators in Europe may also have advantages inherent to their business plans vis–vis operators in other parts of the world. Satellite service providers in the U.S. lack a broadband access network to deploy two-way interactive services. This dilemma is also the case in Asian countries where, like in the U.S., telcos are not required to unbundle their broadband access lines and allow competing service providers to lease them. In Western Europe, however, unbundling regulations are strictly enforced. As a result, satellite TV providers are more actively exploring interactive TV services as a means to differentiate their offerings.

In Europe, the IPTV market is shaping up nicely thanks to a more fragmented yet competitive TV market and a smaller territory, which makes broadband networks less costly to build in each country. IPTV deployment accelerated during 2005 to 2007 in major countries such as France, Belgium, Italy and Spain, making Europe the top region in the world in terms of total subscribers. Most importantly, the potential to see even faster growth between 2007 and 2010 is substantial, as most operators have not yet penetrated 10 percent of their service markets.

The strong growth of IPTV services on a European-wide scale is attributable to the work of many of the major incumbents as well as challengers entering the space.

As telcos in particular begin reporting higher take-rates for their IPTV services, they are indicating that video-on-demand applications have become increasingly popular with their subscribers. Additional features for interactivity and for television personalization are also seen as vital to both differentiation and revenue growth. Telcos will be seeking technology partners with a wide breadth of expertise in network infrastructure, set-top box and other CPE development, and in delivering interactive features.

Service providers have been investing heavily in next-generation technologies to upgrade their network infrastructure. These investments have thus far focused on two main aspects: convergence and capacity. Although these elements are seen as critical in increasing both the quality and the flexibility of the services that operators can provide, will they respond to the bundled services offerings in the same way that U.S. cable customers have? With the telcos, cable and satellite operators all vying in many cases for the same European customer, will rock-bottom pricing still rule as a strategy, or will consumers readily see the increased value in broadband- and video-centric bundles, remain more loyal, and eventually be willing to pay more for these services?

Two other aspects that will also play a key part in reducing the churn rate for service providers are the switching costs and customer satisfaction. These two key factors depend heavily on the speed and the extent to which the service providers will deliver on their promises on integrating communications and entertainment. There is a significant amount of work to be done in standardizing the next-generation technologies and integrating them onto one manageable platform to enrich the consumers’ experience.

The need for integration is all the more acute in Europe, where mobile service penetration in many markets is 100 percent (and more!). European Union regulations require that all service providers support number portability that will allow consumers to switch to a provider of their choice without having to change their mobile identity (i.e., their number). Service providers must view convergence as not only a way to manage their costs and bring uniformity to their service delivery but also as a way to empower customers as active participants in this confluence of entertainment and communications and to build their own converged identities. It is this identity that the subscribers will most-directly associate with switching costs. Any service provider that moves in this direction and provides a platform for a converged identity and backs it up with a commitment to customer satisfaction will have a clear first mover’s advantage in garnering the largest market share.

Kurt Scherf studies developments in home networks, residential gateways, digital entertainment, technology development in the housing market and residential and building management and controls at Parks Associates. Jayant Darasi joined Parks Associates following a career in telecommunications with both service providers and equipment manufacturers.
Get Permission to License or Reproduce this Article

Will IPTV Kill the Television Star?

Firefox Sinks Its Teeth Into Explorer in Europe