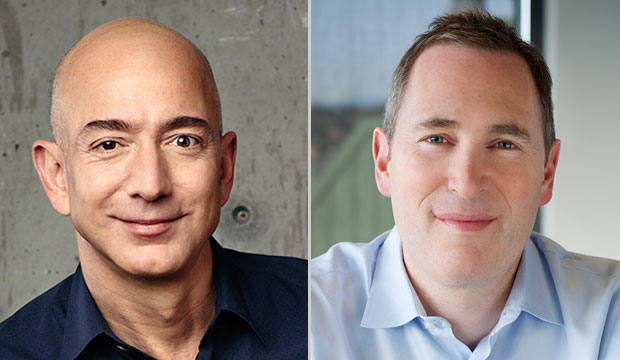 Amazon gets a new chief executive this summer. The company’s founder, Jeff Bezos, plans to step down from that role and transition into a new job — executive chair of Amazon, the company announced Tuesday.

The chief of Amazon’s cloud computing division, Andy Jassy (above, pictured right), will become Amazon’s new chief executive. Jassy served in that post in a temporary capacity along with another Amazon executive in recent years. The change will be effective in the third quarter, which starts in July.

Bezos on Tuesday told employees in correspondence that his intention is “to focus my energies and attention on new products and early initiatives” for the company built into one of the world’s most valuable companies. He intends to remain as a driving force behind the company’s continued innovative growth.

The deep responsibility as chief executive is time consuming and leaves him little time “to put attention on anything else,” Bezos explained. In his new role he will be able to stay engaged in important Amazon initiatives.

That will also give him the time and energy needed to focus on his other projects that he owns or oversees. Those include the Day 1 Fund, the Bezos Earth Fund, Blue Origin, The Washington Post, and his other passions.

Bezos said that his executive move is not about retiring. Rather, it is a result of his being “super passionate about the impact I think these organizations can have.”

Amazon’s financial success will no doubt see little or no negative impact from the executive changes, suggested Charles King, principal analyst at Pund-IT.

“I don’t expect many, if any changes, as Bezos steps away from the CEO role. As Amazon’s earnings report [yesterday] demonstrated, the company is firing on all cylinders. Jassy may be in the driver’s seat as CEO, but you don’t change the trajectory of a company heading in the right direction,” King told the E-Commerce Times.

Despite the pandemic, the company’s retail and cloud business profits soared. Amazon’s stock grew nearly 69 percent in the past year.

Today, the Amazon global mega marketplace is worth $1.7 trillion. Bezos’ personal wealth also soared to $188 billion, which was surpassed only last month by Elon Musk, who heads Tesla and SpaceX among other companies.

Bezos conceived of the warehouse concept for direct-to-consumer sales 27 years ago on a road trip to Seattle. Before that venture began, he started out founding an online bookseller with the same name in 1994. He built Amazon into a global digital storefront that sells books, household goods, cloud computing services, and other products.

When the pandemic hit, the company swerved around supply chain issues. Bezos revved up its operations to meet the growing demand of consumers forced to stay home and not shop in brick and motor stores.

Amazon hired 175,000 additional workers to meet the soaring consumer demand. The company faced criticism from U.S. senators and the general public for its reportedly less-than-ideal treatment of warehouse workers during the coronavirus pandemic.

Why the Sudden Move?

Jeff Bezos will be stepping down as CEO of Amazon following a year of record growth for the e-commerce giant for more than better time availability for Bezos, according to Jason Boyce, CEO and founder of Avenue7 Media and author of “The Amazon Jungle.” This is a strategic move to avoid antitrust scrutiny, Boyce told the E-Commerce Times in a written statement.

Jassy’s experience as chief executive of Amazon’s cloud computing division positions him to guide Amazon into more cloud services, noted Boyce. The selection of Jassy to replace Bezos could indicate what comes next for the marketing giant’s business focus.

“Bezos will move behind the curtain at Amazon and push poor Andy Jassy into the antitrust hot seat,” said Boyce. “Jassy bleeds Amazon blue, and the company won’t miss a beat. But Bezos isn’t going anywhere. He’ll continue to drive the vision and future of Amazon.”

Boyce does not expect Amazon’s approach to technology to change as Jassy is a clone of Bezos. The company will continue to focus on its continuous improvement and feedback loops.

Amazon hides just how profitable the third-party market is for two reasons. One is antitrust concerns, and the other is not wanting competitors to know how profitable their marketplace business is, he explained.

Jassy is an interesting choice for the CEO slot because his background aligns with Amazon’s goals. He fits into how Amazon sees its future as a software services provider, according to Boyce.

“Amazon is already a service and tech business. Even its marketplace could be considered a tech and services business. I believe that if Jeff Wilk hadn’t stepped down, he may have become the next CEO. Since he’s gone, Jassy is the next logical fit,” Boyce said.

Wilk, who was the chief executive of Amazon’s Consumer Worldwide, announced his decision to retire recently. It is not that Andy is just an interesting choice. With Jeff Wilk stepping down, he is the only logical choice, Boyce added.

Boyce expects Amazon to expand into more AI technology. Amazon will continue to iterate on its market-leading products and services, and Jeff Bezos will still be driving the vision of the company.

“He’s not going anywhere and will be 100 percent focused on the next five-to-10 years of Amazon, while Andy [Jassy] runs day-to-day and deals with things like antitrust and unionization,” Boyce predicted.

With Bezos stepping out of daily operations, the executive team will have to figure out where they want to expand, according to Rob Enderle of the Enderle Group. They are already exploring more vertical integration focused on buyer delivery and using drones.

“Product lines like Echo continue to expand, and they are likely to brand other popular products in the future. Besides, they have to weather the antitrust challenges in front of them. Near term, these three efforts will likely consume executive focus,” Enderle told the E-Commerce Times.

How smoothly the executive transitions go, including who replaces Jassy, is anybody’s guess. Bezos is known to be very engaged in decisions within the units he manages, Enderle noted.

“We likely won’t get a sense of the new CEO’s real priorities until Bezos fully steps out of the CEO role in 6 months,” he said.

Companies rarely get through their first CEO transition well because succession is often not a priority, he offered. That is particularly the case for someone as engaged in day-to-day operations as Bezos is.

“That typically makes transitions like this very painful because the CEO job is very different from any other company job,” Enderle said.

It is almost as if Bezos built Amazon and AWS for just this moment, with people and businesses shifting massively toward working and shopping online, noted Pund-IT’s King.

“Given the continuing disruptions of the pandemic, I expect Amazon and AWS will continue to operate in gangbusters fashion. The longer those disruptions continue, the more likely it will be that many of the Amazon-supported processes consumers and companies adopted temporarily will become permanent,” he observed.