Alexa and Cortana: Two AI Heads May Be Better Than One 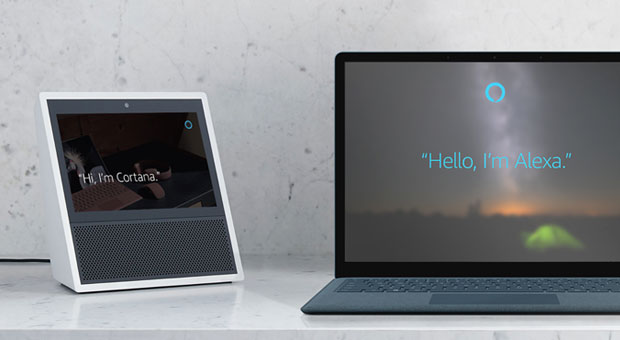 Microsoft and Amazon on Wednesday announced the release of a public preview of the integration of their Cortana and Alexa voice assistants.

“Our ongoing goal has been to make Cortana your intelligent assistant, wherever you need assistance, and across many devices and platforms, from Windows 10 PCs to iPhone and Android,” a Microsoft spokesperson said in a statement provided to TechNewsWorld by company rep Joel Gunderson.

The collaboration is separate from the Alexa app on Windows 10 PCs, the spokesperson noted. “Our collaboration with Amazon is part of a longer-term vision for digital assistants to work together on behalf of our customers.”

How the Integration Works

Currently, Cortana and Alexa each can invoke their counterparts on certain devices. For example, Office 365 users can access Alexa on their PC. Echo users can enlist Cortana to perform work-related tasks such as previewing their calendar, adding items to a to-do list or checking email.

Additional skills, offering features such as streaming music and setting alarms, will be added over time. Availability of the services also will expand to other devices.

“By bringing Cortana to Alexa and Alexa to Cortana, we are adding more value and choice for consumers and developers alike,” the Microsoft spokesperson said. “Cortana users are now able to use Alexa to shop on Amazon.com and manage their Amazon orders, and access many of Alexa’s third-party skills by asking Cortana to open Alexa. Just as Alexa users now have access to Cortana’s helpful productivity features such as calendar and email management, day-at-a-glance and answers, simply by asking Alexa to open Cortana.”

“I tried to get Google Assistant to work with my Outlook calendar but was unsuccessful,” he told TechNewsWorld.

To enable Cortana as a skill on Echo devices, users have to say “Alexa, open Cortana” and follow the sign-in instructions or set up their Microsoft account.

To enable Alexa as a skill on a PC, users say “Hey, Cortana, open Alexa” or click the microphone button and say “Open Alexa,” and then sign into or set up their Amazon account.

Some features that either assistant can handle easily, like setting alarms and timers, won’t be included in the integration.

Cortana eventually may be positioned as the assistant to use for work and productivity-related tasks and Alexa for personal tasks.

“It will be interesting to see how the digital assistants determine what’s work and what’s not,” Ablondi said.

“I think we are evolving to a standard voice interface to the data domain,” observed Michael Jude, program manager at Stratecast/Frost & Sullivan.

“When that happens, voice interaction will really take off,” he told TechNewsWorld.

The global market for voice and speech recognition software will total nearly US$7 billion by 2025, up from the $1.1 billion chalked up in 2017, according to Tractica.

There has been an upsurge in the development of viable market use cases that employ the human voice to control highly sophisticated, automated processes, the company said.

What Microsoft and Amazon Gain

Amazon has about 45,000 skills while Cortana has only about 250, but “It isn’t the skills, since most Alexa users use only a tiny fraction of them,” noted Rob Enderle, principal analyst at the Enderle Group.

“It’s more that Alexa is the only interface for Echo devices, so people are forced to use her and are used to that,” he told TechNewsWorld.

The partnership will give Amazon “broader placement on more devices,” Enderle said. Microsoft, meanwhile, “will hopefully get better access to Amazon content, which they need for products like the Surface Go.”

Microsoft “gets the assurance that Windows PCs will stay relevant as digital assistants become more useful and commonplace, while getting some breathing room to work on Cortana,” said Eric Smith, director of connected computing at Strategy Analytics.

Amazon “gets a big foot in the door in the PC world, which has over a billion devices in use globally,” he told TechNewsWorld. “It truly is a win-win.”

Impact of the Integration

“The value proposition is ahead of the functionality,” he told TechNewsWorld, “but that said, this is still a beta service.”

Impact on Other AIs

The integration will not have any effect on other voice assistants, Narcotta suggested, because “Siri, Bixby and other AI assistants exist largely to serve their own ecosystems. Those providers are more concerned with expanding their footprints than forging new partnerships.”

However, Samsung owns Harman Kardon, and it has its own Bixby voice assistant, which might complicate matters.

“With Samsung, anything’s possible,” Frost’s Jude observed. “They just came out with an update to their intelligent appliance software that uses their own version of Android, which is incompatible with just about every other Android device.”

Offering both Alexa/Cortana and Bixby would be in Samsung’s best interest, Smith suggested, because “otherwise they risk losing out on sales of devices where voice is most important, as users begin finding their preferred assistant.”

Raw voice data will not be shared between Microsoft and Amazon, the Microsoft spokesperson said. All interactions with each voice assistant will be governed by the respective company’s privacy policy.

There is always room for error, Smith noted. “Hopefully both companies are thinking about security and privacy controls.”

Still, “neither Amazon’s nor Microsoft’s business models depend on selling information on their users to be profitable, which is likely the strongest protection against abuses of personal information,” Enderle pointed out. “Both are far less risky than Google, which does have that model.”