In this week’s All Things Appy, we take a look at the five best, must-have free apps for communicating in Windows 8 and taking advantage of the tile-based layout that’s native to the ecosystem.

About the Platform: Windows apps can be found in the Windows 8 Store, which is available from within Windows 8. Click or touch the Start page’s Store tile, and then search by placing your mouse pointer or finger in the bottom-right corner of the screen and choosing the Search charm’s icon.

Voxofon’s app has an average rating of 3.7 stars out of a possible 5 with 233 ratings in the Windows 8 Store.

Voxofon’s Voice-over-Internet-Protocol app lets you text and call. It works by placing the call for you and then ringing your phone to complete the call. A bit convoluted, but great prices at 2.6 US cents for voice and 0.9 cents for texts in the U.S. and lower-than Google Voice rates for many overseas cellphones. 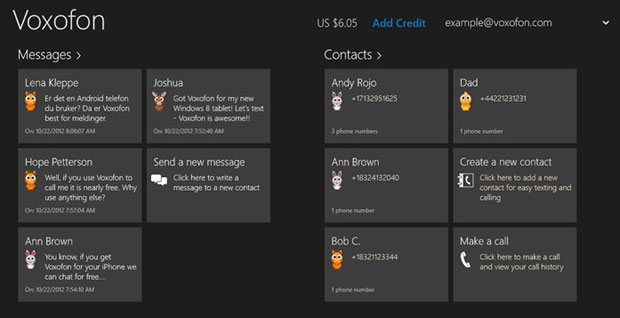 The app provides free messaging when the other person is a Voxofon user too.

Watch out for any charges imposed by your wireless network if you’re using a cellphone for the callback rather than a landline.

No. 2: Mail, Calendar and People

Mail, Calendar and People has an average rating of 2.8 stars out of a possible 5 with 29,054 ratings in the Windows 8 Store.

Mail, Calendar and People is a preinstalled combination of apps that Microsoft groups under one Store listing.

Mail is simply the latest incarnation of Outlook Express, whereas People is a valiant attempt to tie address books from Facebook, Google, Twitter and so on into Windows 8. Add Calendar for Outlook 365 subscription integration.

They’re all included natively. Just select from the Start page.

The Twitter app has an average rating of 3.9 stars out of a possible 5 with 5,102 ratings in the Windows 8 Store.

This Twitter client, from the Twit itself, is a supremely elegant, if stripped-down, solution that flows within the Windows 8 experience.

It looks like Windows 8 and behaves like Windows 8, right down to Options changes being instigated from the Settings and Search charm — and the live animated tile not functioning.

Facebook Friends has an average rating of 3.3 stars out of a possible 5 with 606 ratings in the Windows 8 Store.

Here’s a Facebook client for Windows 8 that changes how you navigate the social network.

Launching the app pulls a tile-based, magazine-style set of friend profile pictures. Ignore the news feed tile on the left and choose a friend. Then see their posts and write a comment or post to that friend’s timeline and so on.

No chat, but messages are included and it’s a significantly less fussy rendition compared to the tired website.

This must-include, classic video messaging service is now owned by Microsoft, so one would expect to see it featured prominently in Microsoft’s Windows Store — which it is. It’s included in this All Things Appy because it will likely become tightly integrated into Microsoft’s OS and Office products. So get used to it.