This week’s All Things Appy takes a look at the must-have, free apps in this genre that will keep your device operating swimmingly.

About the Platform: Google’s Android OS apps can be obtained in Google’s Play Store. Browse to the Play Store — you’ll find it in the device’s app drawer. Then search for the app.

ReChild’s app lets you kill runaway applications that are hogging resources and slowing down your device. 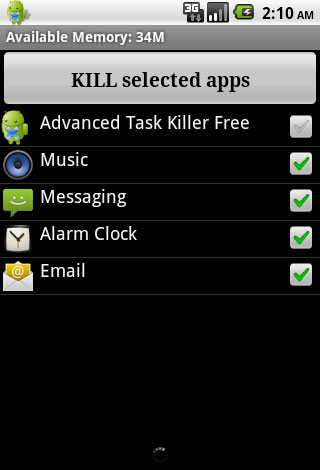 Open ATK and take a look at the list of apps; then uncheck the ones you don’t want and tap the Kill button. The result is instantly cleansed memory reminiscent of the Windows Task Manager in that OS.

If you find your smartphone isn’t making it through the day on one charge, this app will let you manage major battery-depleting resources such as the screen and wireless radios.

Transparent preset modes give you a place to start, or you can customize the settings with aggressive optimization and scheduling, like turning off WiFi when battery thresholds are low, for example.

Monitor your mobile data usage with Richard Gruet’s app, which lets you see how you’re eating up your data plan. Simply set a quota for the period and the app tells you how many megabytes you’re using as the plan progresses.

A guestimate readout lets you project how much of your quota you will have used by the plan turnover date, too, allowing you to modify your habits — or comfortably buy more data before getting cut off or slowed down.

Unlike our No. 1 Advanced Task Killer, which is a simple and super-fast task killer, Watchdog Task Manager Lite monitors running apps and alerts you when one loses control and starts hogging memory. You can then decide whether to kill it.

This app is actually superior in features but more geeky and tricky to use.

Watchdog Task Manager Lite is unrelated to our No. 3 position app, 3G Watchdog.

If you’ve been wondering what’s been using up all of your device storage, LeveloKment’s Storage Analyzer will tell you with a couple of commands.

This app analyzes all of your SD cards — of which there can be many — and other partitions, and then orders the content by size so that you can visualize rogue files occupying precious space. Simply delete the often benign file and free up that space.