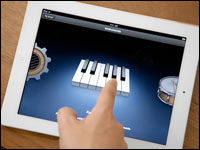 Apple was one of the forerunners in bringing the power of music production to the masses.

Recording and music-making gear that used to cost tens of thousands of dollars and occupy dedicated studios first shrank to home-studio-capable sizes when powered by Apple computers in the 80s, and now it can be found on a smartphone or an iPad.

While much smartphone music-making isn’t free, there are some free apps out there. In this week’s All Things Appy, we take a look at the five must-have, free, iPhone and iPad apps for cheapo jamming with your mobile device.

About the Platform: Apple’s apps can be found in the iTunes store. Browse to the store from your device and search for the app you want to download.

Soundcloud is rated 3 1/2 stars out of a possible 5 for all versions based on 13,344 ratings, and 4 stars out of 5 for the current version based on 16 ratings in the iTunes App Store.

SoundCloud is a social sound network. Audio creators such as producers and musicians post new music and audio, which is shared with peers. You can follow, repost, or add your own music with this app, and join the creative community. 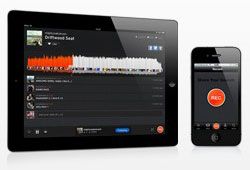 Here’s a fun way to make some music. This app turns your on-device compass into a synthesizer. The compass direction can affect resonance/cutoff, oscillator detuning and more. Tipping the device affects the keyboard octave.To quote this app’s founder, Thomas Ruby, in iTunes: “Go absolutely wild and when you’re waiting for a bus, you’ll have your own world, man! People may think you’ve lost it, but little do they know, you’ve found it!”

Guitar Tuna is rated 5 stars out of a possible 5 for all versions based on 1,294 ratings, and 4 1/2 stars out of 5 for the current version based on 154 ratings in the iTunes App Store.

Highly regarded Guitar Tuna utilizes the iPhone’s microphone to recognize which string you play and let you tune an acoustic or electric guitar — all for free. Paid add-ons are available for other instruments in case you were thinking of taking up the ukulele, for example.

This app is a simple crossfader. Crossfading is the audio mixing technique DJs use to fade out one source while fading in a second track.

Crossfader lets you experiment with the technique and includes some added effects too. Plenty of music is included.

Around 100 additional components can be bought through in-app purchases.