Apple, Microsoft and the Innovation Delusion

I got a note from a guy a few days ago who said he had an idea that would transform Microsoft, and he wanted me to introduce him to Bill Gates so he could present it. I don’t do that, but he was persistent, and it got me thinking. Given that both Apple and Microsoft are based on ideas that came from outside, there is irony in the fact that both firms now have a massive wall between them and outside ideas.

You’d think they would have worked on a way to allow ideas to flow into the firms like water, particularly since both are taking criticism for not being innovative enough right now. Most of the big ideas seem to come from little companies, even though big firms pay billions for R&D. Those R&D efforts either produce things they don’t market or result in small changes to things they already do.

I’ll close with my product of the week, a new tablet from Lenovo that beats Apple on design, battery life and price. You don’t see that very often.

The origin stories of Apple’s Mac and Microsoft’s Windows are well known. Both owe their start to a Xerox PARC, ironically an advanced R&D facility that developed the mouse and graphical user interface behind both products. Apple saw it first, but Microsoft did more with it — however, neither firm originated the concept.

Office was made up of a set of products Microsoft acquired from the outside when it created the successful strategic concept of Embrace, Extend and Exterminate, which it successfully used with Office against Lotus, which is no more.

Samsung and Google demonstrated the successful use of this process against the iPhone. Microsoft forgot it with the Zune, though, showcasing that even though a young company may have a brilliant idea, as it gets older it can get corporate Alzheimer’s and forget it.

Kinect, which really is what separates the Xbox from everything else, was originally meant to be pitched to Apple. Microsoft got it instead because it was more approachable.

The iPod is likely the biggest idea that arrived accidentally at Apple. At its core was PortalPlayer, which originally was slated to go to SonicBlue/S3, but that company drifted to bankruptcy, and history was made. The iPhone, which is an iPod touch with a phone, and the iPad, which is a jumbo-sized iPod, came from this root.

If you look at high-flying companies, Facebook didn’t come up in Apple or Microsoft. Google — which currently eclipses Microsoft, Apple, and IBM — started small. Even with those firms, YouTube was an outside purchase, and the new hot properties, Pinterest and Snapchat, didn’t come from Google, Facebook or Twitter, either. Facebook just tried to buy Snapchat for US$3 billion. It turned the cash down, figuring it could actually do better, and it is likely right.

Apple and Microsoft have considerable R&D budgets, and Google is supposed to be an idea factory — yet none of that really seems to be working very well, given the big ideas come from outside.

The Root of the Problem: Delusion

Part of the issue with all three firms is that they don’t really see this as a problem. As you grow and become successful, you become more concerned about making mistakes than about being creative. Big firms implement practices like forced ranking — which Microsoft heroically just killed — that focused more people on killing ideas than on coming up with them. (You don’t want someone else to get your raise or promotion.)

Put another way, even though the evidence supports the conclusion that companies like Microsoft, Apple, and Google are more successful in bringing ideas to market than in coming up with them, all are structured as if that weren’t true. Steve Jobs isn’t the only one who had a reality distortion field. In short, these firms think they are innovative, and because of that they aren’t working on fixing either their innovation problem — or their inability-to-capture-innovative-ideas problem.

Wrapping Up: Fixing the Problem

Some major tech firms have a VC-like unit that is supposed to get ideas early and compete with other VCs to attract the good ones. Google’s appears to be working better than most, but all are underfunded in light of the potential, and they appear to be competing with internal R&D efforts rather than focusing on competing with external VC firms.

If the billions of dollars difference between Microsoft and Apple valuations were based on Apple getting an idea that Microsoft didn’t, then you’d think the effort to capture ideas would be funded and staffed by both firms at a level consistent with the opportunity. Shouldn’t the biggest and most successful VCs be tied to the biggest and most successful firms because one would ensure the other?

If you are Facebook, wouldn’t such an effort be insurance against the next big social media thing happening outside the company, turning it into the next Myspace? I’ll bet this concern keeps Zuckerberg awake at night. Yet even he doesn’t resource the problem adequately, and instead is embarrassed by younger firms that turn down his cash, much like he did when he was a running a pre-public Facebook.

If he took those billions and funded a well-staffed VC effort, perhaps the next Snapchat would be more likely to be his — and for a fraction of the cost.

Granted, to preserve a strong asset, it likely would want to do what Dell has been doing with acquisitions and keep them independent and unique for as long as possible. That likely would provide both the highest return and the best protection. It’s unlikely you’ll ever see any of this, though, because the CEOs are more interested in not being sued than they are in having the next iPod. That’s kind of sad, actually.

Product of the Week: The Truly Beautiful Yoga Tablet

Sometimes you see an industrial design that’s amazing — a product that’s almost more art than anything else — and your first reaction is damn, that is nice looking. Lenovo’s new Yoga Tablet is that way. It doesn’t lead on performance, outside of an amazing 18 hours of battery life, but on appearance this thing is a 10 out of 10. Lenovo has placed most of the componentry into a cylindrical compartment that makes the rest of the tablet paper-thin, yet still allows decent speakers and a massive battery.

The Yoga has a built-in kickstand so you can set it down, and that cylindrical section makes it far more comfortable to hold than a standard tablet, as it fits your hand better. The price is decent as well: $249 for the 16-GB 8-inch and $299 for the 16-GB 10-inch model. 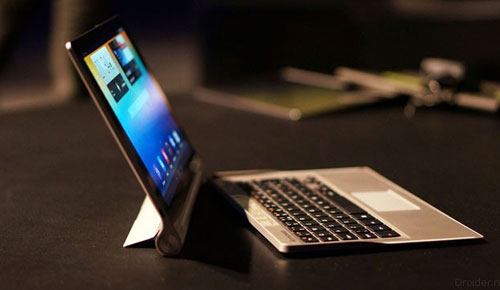 It comes with an SD memory slot so you can expand it, or you can pay other $10 and go to 32-GB versions of both. Compare that to Apple pricing.

It has a $69 optional wireless (Bluetooth) keyboard that magnetically attaches to the unit. It needs stronger magnets but otherwise works fine. The display isn’t Retinal class, but it is an acceptable HD 1280 x 800. The processor isn’t a Tegra or Snapdragon, but it is quad-core.

For not a lot of money, you get a beautiful design, segment-leading battery life, and a unique built-in kickstand that should come with every tablet. However, at the end of the day, what is best about this product is that it is drop-dead gorgeous and a natural for my product of the week.