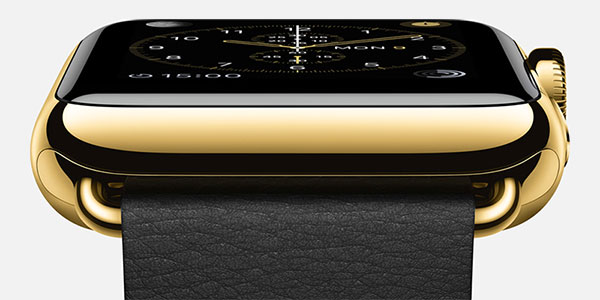 Movie star Anna Kendrick managed to say something in a single tweet that instantly nails anyone who would buy a gold Apple Watch Edition: “We should be thanking Apple for launching the $10,000 ‘apple watch’ as the new gold standard in douchebag detection.”

We should be thanking Apple for launching the $10,000 "apple watch" as the new gold standard in douchebag detection.

— Anna Kendrick (@AnnaKendrick47) March 9, 2015 There’s one complication, though. People who believe that a gold Apple Watch is an important status symbol — or somehow the height of fashion — aren’t the real problem here.

Of course, people who buy things to bring them status are some of the saddest and most deplorable humans around — and I don’t mean to let them off the hook. Status should be about what you do, how you act, and how you elevate those around you. Period.

What I’m getting at is that the shallow stupidity that forms the core of people who live with thoughtless privilege isn’t what disappoints me with the Apple Watch Edition.

Apple missed an opportunity to do something truly great and instead did something far beneath its potential.

Gold for the sake of gold is disconnected from the presumed purpose of an Apple Watch.

OK, the gold is for fashionistas, right?

That’s its purpose — to look good for rich people to buy. What’s wrong with that?

If that’s all Apple wanted to do — make something pretty for the glitterati — that’s sad. Worse, it represents a missed opportunity, which I’ll get to in a minute.

I guess there are worse things you could do with your life than make a profit off massively rich douchebags.

However, that’s not Apple. Or that wasn’t Apple. Hard to say where Apple goes from here, but consider this:

If you’re saying the gold is prettier and therefore worth it, please stop reading right now. This column is not for you. Go buy a small dog to carry around as a fashion accessory that can help fill the cold empty spot inside you when you match its collar with your belt.

Meanwhile, what about the tradition of other highly expensive watches? Aren’t they are least as pointless as the Apple Watch Edition?

However, it should have a connection to its value. The craftsmanship and style that go into the building of such a watch can be rewarded. There are guys who have devoted their lives to learning the trade and who are able to assemble tiny gears and springs to create a timepiece that keeps accurate time. That’s amazing.

Heirloom watches last for generations and boast timeless style. Can you imagine packing around a first-generation 18-karat gold iPhone just because it technically would still function with a new battery? It’s stupid. The Apple Watch Edition is the sort of thing that eventually will get left in a drawer like an old iPod.

Because the Apple Watch Edition is a smartwatch, it is a consumable device — not an heirloom. It won’t last multiple generations. When the price is so wildly disconnected from the technology, craftsmanship and purpose, its existence becomes obnoxious.

As an Apple enthusiast, can I simply ignore the douchebags who will inevitably drop more than $10,000 for it? Drop $17,000 for it? Yes — but only because Anna Kendrick so aptly pointed out that it represents the new gold standard in douchebag detection. (Thank you, Anna. I promise to watch one of your movies.)

There’s a Much Better Way

The real question is how could Apple have dropped the ball so spectacularly? Did the company’s leaders get lost in their own navels, feeling the need to take on expensive traditional watches? Did they need to have an answer? Did they want their own gold watch?

Was it just calculated free marketing dollars? As in, the more people talk about newfangled $17,000 wrist ‘puters, the better? Was it the notion that a high-end and a low-end watch might direct people to buy the “sensible” watch priced in the middle? Is this just a necessary psychological ploy to sell more stainless steel watches?

If any of this is true, Apple didn’t do its real job and focus on a making products that have a reason for being — that touch lives and improve them. A thousand no’s for every yes, right? The Apple Watch Edition should have been a no.

Yet that’s not quite right, either. In the place of the current Apple Watch Edition, Apple should have created something much better — something actually worthy of being a symbol.

Why didn’t Apple invent a fancy new gold coating instead of using real gold, and then sell a premium Apple Watch with the stipulation that a large portion of the proceeds would go to support some charity? Or to produce sustainable energy? Or fund scientists to efficiently desalinate seawater? Or back a mission to Mars?

A high-priced Apple Watch — even a gold edition that costs $50,000 — could have been a status symbol by the virtue of what it represented beyond itself as a product: a contribution to a charitable foundation or the pursuit of science for the good of humanity.

Apple could have curated several options, and then laser-etched the choice onto the back of the Apple Watch. Maybe such a watch would have a spectacular custom watchface to go with the choice — only available on that Edition.

Suddenly, instead of functioning as a douchebag detector, it would be a status symbol signifying something worthwhile. Suddenly, the status symbol could be a talking point. Suddenly, people with astounding means might take a moment to think — maybe even involuntarily — about their own status and what role they play in the world.

Apple could have transformed the watch industry — could have thought beyond the wrist and what it actually means to move around in our world.

Instead, the reality of what Apple has produced today is disappointing. Apple seems to be caught up in the notion of fashion, and rather than redefine fashion — which is what Apple prides itself on doing, redefining — it tried to make a better 18-karat gold alloy for a me-too watch. That’s great, Apple. Really great. Nice dent in the universe.