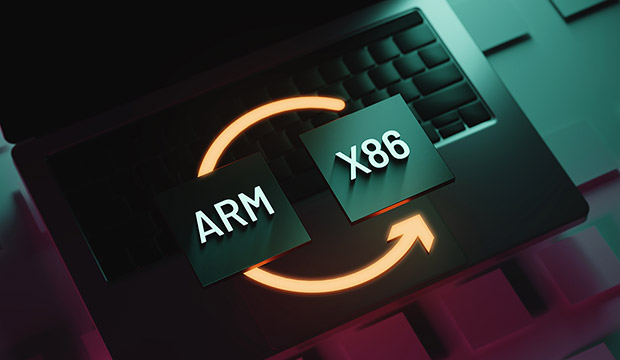 Up until recently, Qualcomm has primarily been the standard-bearer for ARM, but that will change if Nvidia’s attempt to buy ARM is successful; which is likely. Nvidia seems to be more interested in servers than smartphones at the moment. Still, they do have their eye on PCs, where conflict with Qualcomm is likely to emerge.

However, this is platform war, and ARM is currently more connected with developers than x86. This fight is primarily a battle between business plans, with ARM heavy on licensing and x86 more focused on sales.

Let’s talk about how this battle is likely to play out, because the outcome is far from decided and the winner may end up with all of the chips. We’ll then close with my product of the week: a new headset from Plantronics that may be just what the doctor ordered for your next Zoom call.

The market likes diversity in vendors, but it isn’t a fan of diversity in architectures because that creates selection risk.

OEMs and IT organizations spend, collectively, billions of dollars on technology, and the more viable types of technology in the market, the more likely one of these large, influential entities are likely to guess wrong.

Ideally, and this was initially built into the x86 plan, they’d like two redundant vendors who are plug-compatible so they can switch between vendors later in the manufacturing process and mitigate supply risk.

The x86 at one time had a massive advantage because when IBM originally went to Intel for their x86 technology, they demanded that Intel license to someone else, which turned out to be AMD, to assure competitive pricing and backup in the face of a chip shortage.

However, Intel negotiated socket compatibility away to lock up the platforms they built, not realizing this would weaken x86 strategically.

So, Intel moved away from what the market wanted to prevent AMD (which had been growing) from gaining more market share. But by doing so, they strategically weakened x86. Or, put a different way, just as the computing market was moving to more of a licensing and compatibility model, Intel went in the opposite direction, putting its technology and the company at higher risk.

In a way, just as Microsoft’s mistakes in the 1990s largely drove Linux, ARM has increasingly been driven by Intel’s mistakes in that same decade. Microsoft responded to their threat by becoming more open and closing the gap concerning Linux, and it has even embraced that competing platform. Redmond’s defense shifted from one of power and force to one of support and advancement, and today Linux is both viable and not much of a threat to Microsoft.

The market likes the open-source collaborative model, which surrounds ARM, and it likes the broader choice of ARM vendors even though Qualcomm is arguably dominant, much like Intel is in x86.

This structure allows the ARM ecosystem to act more like a cohesive unit against x86. Intel, AMD, and VIA rarely act in concert and are more likely to ignore or position themselves against each other than they are the broader threat. It often seems that the x86 faction infighting keeps them all less focused on the more significant threat from ARM.

In terms of the balance of power, the two sides are relatively weighted, with x86 dominant in PCs and servers, which tend to carry reasonably high margins; and ARM dominant in cellphones, tablets, and more likely be embedded in appliances and IoT devices.

This competitive dynamic gives ARM an impressive lead in the higher-volume categories and an advantage in economies of scale. But x86’s lock on PCs and servers is far harder to break, which offsets somewhat a potential cost advantage that would assure ARM’s eventual victory.

Also, x86 has generally more performance headroom than ARM, blunting the use of virtual machines as a leveling agent, which would otherwise provide a more straightforward path to competitive displacement. But it is far easier to increase performance while holding down energy use than it is to reduce energy use while maintaining performance.

In addition, Intel collapsed its Developer Forum. In contrast, ARM events for developers continued shifting developer support between the two platforms; weakening x86 significantly (they are correcting this, but many of the developers have already switched).

On top of that, with Apple switching to ARM and Nvidia buying ARM, two of the most influential companies in tech have effectively switched sides. Nvidia also has a significant beachhead in servers with its targeted GPU solutions focused on AI and analytics loads providing an onramp for its coming blended ARM server solutions.

Fortunately for Intel, Apple doesn’t partner well with anyone, which limits the company’s benefit to the ARM ecosystem beyond optics — but optics can be very powerful here.

Overall, the advantage has shifted to ARM long term. If the ARM providers coordinate, provide a seamless way to move between each other (the equivalent of socket compatibility), and reduce attacks against each other, this could be their game to lose. They aren’t there yet.

If the x86 providers can combine to defend their shared platform, move to more of an open source and licensing model that the market appears to prefer, they will strengthen their hold on their segments and be in a far better place to defend their positions. That isn’t happening either.

So this is still anyone’s game to win or lose. But the momentum, with the Apple and Nvidia moves, is clearly on the side of ARM at the moment.

We are witnessing a battle royal between two hardware platforms: x86 and ARM.

Resources and capabilities were relatively matched until Apple and Nvidia effectively switched sides from x86 to ARM. As a consequence, ARM has the advantage; but a lack of cooperation and coordination hurts both sides of this battle, assuring neither can go to war at its full strength.

Intel’s efforts to re-establish its connection with developers will take time, mainly if those developers see x86 as a declining platform. Apple may be more of a liability on the ARM side than an asset, given its closed nature.

The outcome of this fight, at least this decade, likely pivots on Nvidia’s execution more than any other player because Intel is constrained by the mistakes it made in the past; and it is the acquisition of ARM by Nvidia that potentially has the most significant impact on this battle near term.

But the market wants one technology to emerge; and the open nature of ARM, which dovetails with the open initiatives of software and cloud providers, gives it an advantage that Intel and x86 have yet to address fully.

IBM and Microsoft have showcased the path to victory, or at least a stalemate, for Intel. But shifting from Intel’s current hardware model to one that better mirrors Qualcomm’s might be beyond Intel’s will to change.

As with most battles, whoever wins this will likely be the one that best assesses the battlefield and can position its resources, including partners and licensees, most affectively against their competitive threat. I expect this will be primarily decided within five years.

For many of us it looks like the new normal we adapted during the pandemic will be either permanent or part-time, as we either continue working at home exclusively or split time between our home and the company offices. This outcome signifies that much of our meeting time will still be done with products like Teams and Zoom.

This also means that having a great headset remains essential, and the new Poly Voyager Focus 2 may be that headset.

The design is on-ear which is often preferred in offices; versus in-ear which is favored when mobile; or over-ear which is advantageous on airplanes or places that are noisier than most. On-ear headsets tend to be more comfortable than in-ear for long periods and aren’t as isolating as over-ear designs.

Battery life is estimated to be 19 hours, so it will handle all-day use without recharging. The headset can be charged in its cradle or by plugging in a micro USB cable.

This unit has the most advanced active noise cancellation I’ve yet seen, both for inbound and outbound sound, so when using this at home, ambient noise from your kids or pets should be mostly, if not entirely, blocked out. Poly estimates that this headset is twice as effective at blocking out ambient noise inbound and three times as effective with ambient noise outbound (though your house might seem quiet; it’s not).

Like most headphones, this has controls for music; and like other Poly products, it provides a visible lighted indicator telling others you are on a call.

It isn’t a cheap date at $329, but it will connect you to work, so going cheap may not be a wise practice.

Given this is the best communications-focused headphone I’ve yet tested, the Poly Voyager Focus 2 is my product of the week.