Assange to Test His Charm on Russian TV 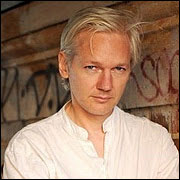 WikiLeaks founder Julian Assange has plans to host a new TV show called “The World Tomorrow.” The half-hour weekly episodes are scheduled to begin airing in mid-March on Russia’s English-language RT channel. It will reach some 60 million global viewers.

Assange sees the series as a vehicle to discuss the issues of the day with the people who are shaping the future “in a deeper and clearer way than has been done before.”

Wikileaks did not respond to our request to comment for this story.

It can be assumed, though, that Assange and Wikileaks have goals that go beyond discussions of pressing issues. For starters, Assange would probably like to rehabilitate his image somewhat.

Before Wikileaks’ wholesale dump of U.S. state secrets, Assange was respected by many journalists and political pundits, due to Wikileaks’ mission of promoting transparency.

That changed after Wikileaks posted classified U.S. military documents on the Afghan war on the Internet, followed by classified diplomatic cables from the State Department. Many of Assange’s early supporters abandoned him.

Another driver of the TV show is, no doubt, the hope that it will bring in very needed financial support for Wikileaks. With the U.S. government blocking its access to many channels for donations and its ever-growing legal fees, Wikileaks is struggling.

The RT channel will likely tap global viewers with an anti-American bent who might be willing to donate.

Originally launched as “Russia Today” and then renamed “RT,” the channel is viewed as a propaganda arm of the Kremlin with a distinct bias against the U.S.

Disaster in the Making

For that reason alone, it is very unlikely Assange will be able to rehabilitate his image in the U.S. — at least via this show — said David Johnson, principal with Strategic Vision.

“The majority of people in this country, even if they agree with the crux of Wikileaks’ mission, do not like Assange or approve of what he has done,” he told TechNewsWorld. “People think he was irresponsible and reckless. I don’t see how any TV show will change that.”

On top of that, Assange still faces rape allegations in Sweden, noted Johnson. Assange has maintained he is innocent. The show will begin filming at his home in the UK, where he is under house arrest. The UK Supreme Court is scheduled to hear his extradition case in the coming weeks.

Conspiracy theorists will be following the show — and possibly a bigger portion of the larger public will tune in at first — “but those people will tune out just as quickly after the first two or three shows,” Johnson predicted.

“Undoubtedly people are fascinated by the weird, bizarre, by the shocking or scandalous,” he continued. “It is the reason why people would have tuned in to an interview with, for example, Casey Anthony, who was found not guilty last year of murder.”

“Assange is a good public speaker and should be able to adequately defend himself,” he said.

Also, “Assange does need to clear up his image because, for better or worse, the scandal over the rape charges continue to obscure the real issue of Wikileaks and its mission of making classified government documents public — regardless of the consequences,” Almonte added.

Never underestimate the ability of Americans to forget old news, he quipped. They tend to accept the mainstream media’s version of events — and the American media tends to be less “energetic” about uncovering the truth.

“It quickly flits from one hot news story to another,” said Almonte. “By now, Assange’s story is old, and the U.S. media has gone on to other ‘scandals.'”