A team of European astronomers has determined that a far-off galaxy spotted last year by the Hubble Space Telescope is the most distant object ever seen. 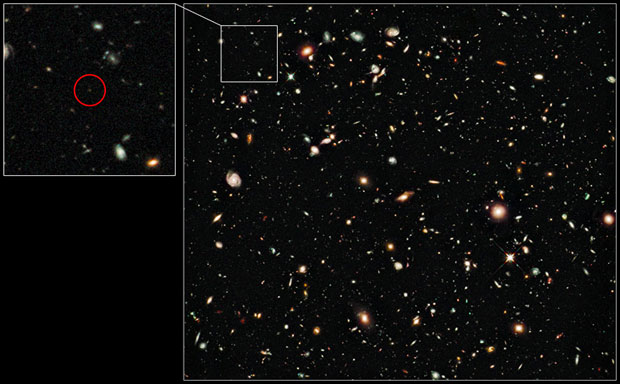 Astronomers using ESO’s Very Large Telescope have measured the distance to the most remote galaxy so far, UDFy-38135539 (the faint object shown in the excerpt on the left), which we see as it was when the universe was only about 600 million years old. Credit: NASA, ESA, G. Illingworth (UCO/Lick Observatory and University of California , Santa Cruz ) and the HUDF09 Team

Using the European Southern Observatory’s Very Large Telescope (VLT), the astronomers were able to analyze the very faint glow of the galaxy and calculate that its current appearance reflects the way it was when the universe was only about 600 million years old. Since the “Big Bang” that created the universe is thought to have occurred 13.7 billion years ago, the galaxy — known as “UDFy-38135539” — is now estimated to be 13.1 billion years old, making it the earliest glimpse at the universe ever obtained.

“The astrophysical implications of this detection are even more important” than the measurement itself, said Nicole Nesvadba, a researcher at the Institut d’Astrophysique Spatiale and coauthor on the study. “This is the first time we know for sure that we are looking at one of the galaxies that cleared out the fog which had filled the very early Universe.”

A paper describing the discovery was published in the Oct. 21 issue of the journal Nature.

‘There Was No Light’

Catching a glimpse of the universe’s earliest galaxies is extremely difficult, in large part because the first 600 to 700 million years were dark, Paul Czysz, professor emeritus of aerospace engineering at St. Louis University, told TechNewsWorld.

Until the first suns ignited, “there was no light,” he explained. “It was gray and unformed.”

This newly discovered galaxy, then, “is about the first object that you can see, period,” he said. “This had to be very shortly after the suns got enough density that they could ignite.”

Studying such ancient galaxies is further complicated by the fact that the expansion of the universe has since stretched the wavelength of the light they emit. That effect is known as “redshift,” and it results in any measurable light typically falling mostly in the infrared part of the spectrum.

Then, too, there’s the problem that at the time in question — less than a billion years after the Big Bang — the universe was not fully transparent; rather, much of it was filled with a hydrogen fog that absorbed the fierce ultraviolet light from young galaxies. The period when the fog was still being cleared by this ultraviolet light is known as the era of reionization.

‘Gravitational Forces Had to Be Working’

What’s also particularly interesting about the discovery is that “if they could see a galaxy this early, it also means that the gravitational forces had to be working before the suns actually ignited,” Czysz pointed out.

Gravity is a part of what makes galaxies form.

That, then, furthers our understanding of what the universe was like before the earliest suns began to make it visible for us.

The first sign of this distant galaxy was captured by the new Wide Field Camera 3 on the NASA/ESA Hubble Space Telescope, which discovered several promising objects in 2009 that were thought to be galaxies shining in the era of reionization.

“After the announcement of the candidate galaxies from Hubble we did a quick calculation and were excited to find that the immense light collecting power of the VLT, when combined with the sensitivity of the infrared spectroscopic instrument, SINFONI, and a very long exposure time might just allow us to detect the extremely faint glow from one of these remote galaxies and to measure its distance,” explained Matt Lehnert, an astronomer from Observatoire de Paris who is lead author of the paper.

Even further insights are expected from the forthcoming James Webb Space Telescope, which “will show us the very first galaxies that formed in our universe,” Mario Livio, senior astrophysicist with the Space Telescope Science Institute, told TechNewsWorld.

Launch of that telescope could happen as soon as 2014.

Now that mankind has seen a galaxy as it existed 13.1 billion years ago, it’s only natural to wonder what has happened to it since.

“Since the light that came from there left 13.1 billion years ago, it probably doesn’t exist today,” Czysz asserted.

“If you look at a galaxy 20 million light years away, for example, you have to remember that that object actually existed as you see it 20 million years ago,” he noted. “You don’t know what it is today.”