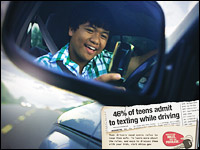 A new University of Utah study released Monday provides more fuel for the conviction that sending and receiving text messages while driving affects concentration and reaction times. However, more potential digital distractions lie down the road — as shown by another Monday announcement: Ford Motor said its second-generation Sync service will turn cars into rolling WiFi hotspots in 2010.

Granted, the next-level Sync entertainment and connectivity qualities are designed for everybody in a car except the driver — unless the car is at a stop. Sync’s first generation has also drawn raves for features that allow drivers hands-free access to mobile phone services and stored music.

Yet drivers’ advocates are urging tech companies to think about all the consequences of mobile Web innovation, so that safety and wireless convenience don’t end up on a collision course.

Nineteen states have bans on texting while driving. Increased competition for a driver’s attention awaits, as more companies invest in the concept of mobile connectivity to boost not only their own fortunes, but those of a struggling automotive industry as well.

Putting the Brakes on Car Texting

The study, led by University of Utah psychologists Frank Drews and Dave Strayer and released in the current issue of the journal Human Factors, focused on a group of 40 test subjects averaging 21 years of age who used mobile devices in driving simulations.

“Analysis of driving performance revealed that participants in the dual-task condition responded more slowly to the onset of braking lights and showed impairments in forward and lateral control compared with a driving-only condition,” the study’s authors concluded. “Moreover, text-messaging drivers were involved in more crashes than drivers not engaged in text messaging.”

Driving while talking on a cell phone is bad enough, but those who texted while they drove changed their driving habits in much more negative ways, the researchers reported. The test subjects increased their following distance from the car ahead of them as they texted, almost as if they were trying to create a “buffer zone”; hence, they were aware of the inherent dangers in texting while driving. Yet that was not enough to counteract the impact of texting on braking distance and reaction times, and slowing down to create a buffer may have increased the potential for being rear-ended by cars following them.

There’s texting, and then there’s reading reply texts. Both activities increased reaction times, but reading a text resulted in even longer braking times, the study concluded. In this situation, though, the researchers realized an opportunity for technology to ride to the rescue.

“For example, systems reading messages out loud could support drivers,” they wrote. “However, if the impairment associated with reading text messages is a result of the externally controlled event of receiving a text message, then suppressing reception of messages while operating a vehicle might be a better-suited strategy to mitigate the impact of driver distraction.”

There is a difference between simulator research and real-world testing, he acknowledged, but “clearly, the range of physical and fundamental distractions makes [texting] completely inappropriate for driving.”

The AAA has been active in getting state legislatures to implement bans on adults and teens texting while driving, but McNaull said its members know that it can’t halt the march of innovation.

“We don’t want to push technology out of the vehicle that can be useful for passengers,” he commented. “We’re concerned that these technologies be developed and deployed responsibly by the automobile manufacturers and the device manufacturers. It’s important that when this equipment is developed that we protect ourselves from ourselves.”

Services like the next generation of Ford’s Sync auto connectivity promise mobile WiFi with the ease of a USB modem plugged into a port on a car’s dashboard, creating a wireless zone. Ford, which has its first-generation Sync in 13 of its current models, says more will get the second generation of the service sometime next year.

A rolling hotspot can mean more updated traffic and weather data streamed to a car’s driver.

“We’re all for making people more productive behind the wheel,” McNaull observed. “We just want to make sure that efficiency doesn’t come at the cost of crashes and injuries and lives.”

The Future of Mobile Connectivity

Any parent who has tried to keep a young child strapped in a car seat entertained for a long road trip knows the value in mobile connectivity, said Ben Bajarin, director of the consumer technology practice at Creative Strategies.

“We know in terms of media delivery and other things, the car’s always been an attractive target,” Bajarin told TechNewsWorld. “Most people had assumed something like satellite or cable service would deliver TV, instant access to on-demand movies and games — making the car some type of portable entertainment platform. WiFi may be the way it’s delivered.”

Yet mobile connectivity has to be more about just accessing the Internet from the car, according to Bajarin. More people, especially younger people, will already have smartphones and other Web-enabled mobile devices for that purpose when they buckle up. Perhaps the screens they bring with them into a car are the windows to a richer media experience enabled by the rolling hotspot concept.

“Maybe your laptop, or one of these tablet PCs, as long as it’s got WiFi — then it becomes more interesting,” said Bajarin. “It can go from home to car to hotel, whatever. There are more uses to it.”

Technology companies must keep the safety issues in mind when developing new concepts for cars, he agreed. Yet a richer data pipe into automobiles can also enhance safety — for example, by improving vehicle maintenance providing real-time traffic data.