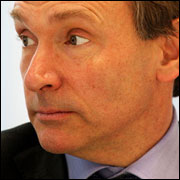 The Internet should be a basic human right, but access to it is increasingly unequal around the globe, said Tim Berners-Lee, founder of the World Wide Web Foundation, as he launched its annual Web Index last week.

The Web has the potential to be a great equalizer, Berners-Lee asserted, but only “if we hard-wire the rights to privacy, freedom of expression, affordable access and Net neutrality into the rules of the game.”

That currently does not appear to be happening. The Web is becoming less free and more unequal, the Web Index suggests. Almost 60 percent of the world’s people — 4.3 billion — cannot get online at all today, while more than half of those who can live in countries that severely restrict their online rights.

Indiscriminate government surveillance and online censorship are both on the rise, the report found. Eighty-four percent of countries have weak or nonexistent laws to protect citizens from indiscriminate mass surveillance, up from 63 percent in 2013.

Meanwhile, 38 percent of countries now censor politically or socially sensitive content to a moderate or extensive degree, representing a 6 percent increase from 2013. In addition, only a quarter of the countries assessed this year effectively enforced clear rules to protect Net neutrality, the foundation reported.

Further, 20 percent of female Internet users today live in countries where harassment and abuse of women online is extremely unlikely to be punished.

Numerous key Web issues, including privacy, censorship, gender-based violence, equality and — for the first time ever — Net neutrality are assessed across 86 countries in the 2014-15 edition of the index.

Nations with high levels of wealth, low levels of inequality, and strong protection for civil liberties — Denmark, Finland and Norway top this year’s Web Index — get the most social and economic benefit from the Web.

That positive correlation is worrisome, in large part because of its potential to expand the digital divide, the foundation said.

“This trend can and must reversed,” urged Anne Jellema, CEO of the World Wide Web Foundation and lead author of the 2014-15 Web Index report.

Toward that end, the foundation called on policymakers to increase affordable, unencumbered access to the Internet; prevent price discrimination in Internet traffic; invest in high-quality public education; promote participation in democracy and freedom of expression; and create opportunities for women, the poor and other marginalized groups through increased investment.

“The Web has been and remains one of the most remarkable conduits for sharing information and knowledge between people,” said Charles King, principal analyst with Pund-IT.

Free access to information and education has “long been known as a key to personal and societal betterment,” he told TechNewsWorld.

However, “it is not surprising that over half of the world’s people have no Web access,” King said. “After all, the Internet is an infrastructure-dependent mechanism, and many developing countries are struggling to provide their citizens with basic necessities, including access to workable transportation, electrical power, safe sewage disposal or even clean drinking water. Frankly, in those situations it seems safe to say that Web access remains a remarkable luxury.”

Within repressive regimes, “free access to information is and will remain a fundamental threat that must be throttled or killed outright,” he pointed out.

“Sadly, I don’t really expect this situation to alter much,” King observed. “I respect the WF and Tim Berners-Lee for speaking truth, but those who are most in need of change will do all they can to retain power and remain safely in control.”

A Propensity for Propaganda

“The reason many countries don’t want free access is that the sitting government doesn’t want their population polluted by views that they believe are subversive to either their culture or their leadership,” he told TechNewsWorld.

“While some of this might be accidental, propaganda is a common tool used by governments and contrary organizations, and the Web is generally unable to determine what is true on either side of any argument,” Enderle explained. “No matter the side, the folks in power often move aggressively to suppress contrary views.”

If it were possible to ensure the universal truth of content that appears on the Internet, much of what Berners-Lee proposes “would make more sense,” Enderle suggested, “but since we can disagree on the truth, it will be far more difficult for some governments to comply with his wishes.”

It’s not just governments, either: “Individuals often don’t want to see information that disagrees with their world view and find it troubling and often traumatic,” he noted.

“At the heart of this problem isn’t cable companies, content or service providers, or governments,” Enderle said. “It is the human race itself.”