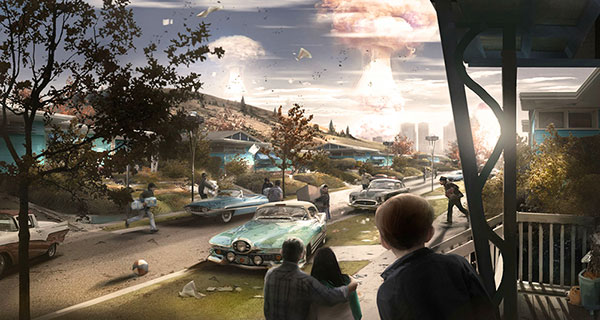 With a sackful of news about additions to its library and an expansion of its lore, Bethesda Softworks held its first-ever showcase on Sunday, as the Electronic Entertainment Expo gathered heat for its official kickoff on Tuesday.

Jolly staffers dished news and trailers for the next entries in some Bethesda’s most successful franchises, as well as a pair of spinoffs, and a new intellectual property that will compete for a slice of the multiplayer shooter pie.

To pump back in some of the excitement lost through leaks and its own pre-E3 reveals, Bethesda showed off reborn twitch-shooter Doom.

It also shared an extensive look at what, to many, is the company’s most anticipated game.

Fallout 4 (screen shot above) received the most attention during Bethesda’s presentation. The company presented a gameplay demo of Fallout 4 and divulged bits of information about how the successor to 2010’s Fallout: New Vegas will play when it launches late this year for PlayStation 4, Xbox One and PC.

Bethesda’s Sunday presentation also featured the announcement of Dishonored 2 and a pair of mobile games that live in the lore of the Fallout and Elder Scrolls series: vault management game Fallout Shelter and Hearthstone rival The Elder Scrolls: Legends.

Further, Bethesda announced a real Pip-Boy — a hollow disk reader that players can use as a companion to Fallout 4.

“It’s actually pretty impressive that the first time out of the gate, they put together such a confident, well-rehearsed show,” Ackerman told TechNewsWorld.

Bethesda brought the right content to the conference and its fans embraced it, noted Alexandre Mandryka, a game design consultant who has worked on more than 20 video games, including Assassin’s Creed and Far Cry.

“Bethesda played their cards right with their lineup, the real-life pip-boy highlight and collectible figures gifts,” he told TechNewsWorld.

The schedule also worked in its favor.

“The timing of the conference — right before everyone else — really helped drive interest and attention, as the high Twitch viewer [numbers] showed.”

Bethesda featured a wildcard during its showcase: a new card game. While little is known about The Elder Scrolls: Legends, it’s clear Bethesda is looking to bite into the success Blizzard has been enjoying with Hearthstone: Heroes of Warcraft.

“That’s a smart move,” said Cnet’s Ackerman. “People saw it and understood right away that’s it exactly what its was (a Hearthstone rival). I would not be surprised if we saw more games of that genre that are attached to the franchises of different companies.”

Bethesda understands that consumers’ attention continues to turn to mobile, so it has to have a strategy if it wants to buy into the game before its too late — but it may be too late already. Its mobile offerings will have to live in harmony alongside its other offerings, rather than cannibalize them, according to Ackerman.

The question is,”how do you move into the very dangerous area of mobile games, which are often free-to-play and often have a microtransaction model?” he asked. “It kind of makes it hard to make money. They’re being cautious about it. It’s almost late in the game to get into mobile, but props to them for at least thinking about it.”