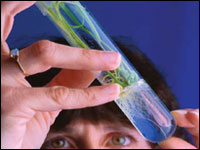 World leaders must embrace agricultural biotechnology if they are to cope with the severe food shortages likely to result from global warming in the coming decades, warns a group of scientists.

Yields from some of the most important crops for human consumption begin to decline sharply when average temperatures exceed about 30 degrees Celsius, or 86 Fahrenheit, they explain in an article that will appear Friday in the journal Science.

As a result, “you’re looking at a 20 percent to 30 percent decline in production yields in the next 50 years for major crops between the latitudes of southern California or southern Europe to South Africa,” said David Battisti, a University of Washington atmospheric sciences professor and coauthor of the article.

Countries around the globe, then, need to “get beyond popular biases against the use of agricultural biotechnology,” particularly crops genetically modified to produce greater yields in harsher conditions, the scientists said.

Even without climate change, feeding the world’s population will be increasingly difficult as that population increases — likely by more than 30 percent to 9 billion people in 2050.

That alone would require doubling grain production in the tropics, Battisti said.

A warmer climate, however, will reduce yields at a time when they’re needed most, because many temperatures will be too high to achieve the most efficient photosynthesis. For every temperature increase of one degree Celsius, in fact, yields tend to go down by 10 percent, Battisti told TechNewsWorld.

“The projected changes in temperature due to global warming will put a lot of really basic stresses on plants,” he said.

In the tropics and subtropics, in fact — between roughly 30 degrees North and 30 degrees South — the optimal temperatures for photosynthesis are already exceeded, explained Battisti.

“If you add global warming on top of that, you find that it puts further stress on plants,” he pointed out.

Even if emissions were reduced dramatically in the coming years, it would still result in yield reductions of at least 20 percent by midcentury, he asserted, with further reductions due to increasing pressure from pests and pathogens.

“We are well aware through our emergency work responding to drought/famine/flood that climate change is already taking its toll on agricultural yields in many parts of the developing world,” Jennifer Parmelee, senior spokesperson with the United Nations World Food Program (WFP), told TechNewsWorld.

The WFP works to address the impact of climate change through food-for-work programs “that include agricultural rehabilitation such as building of microdams, terraces and other water catchments, and replanting of trees and shrubs to prevent further erosion and loss of precious topsoil,” Parmelee explained.

Places including Ethiopia and Haiti, for example, are both “massively deforested,” she noted.

So far, there hasn’t been much attempt to breed crops resistant to heat stress, Battisti noted.

The result of all these increasing pressures could lead to a “major starvation catastrophe” by the end of this century among the more than 3 billion people who live relatively close to the equator, along with a plethora of food shortages elsewhere, the report’s authors warn.

“I grow increasingly concerned that we have not yet understood what it will take to feed a growing population on a warming planet,” said lead author Nina Federoff, who is science and technology adviser to Secretary of State Hillary Rodham Clinton and biology professor at Pennsylvania State University.

What’s needed are systems that have the potential to decrease the land, energy and fresh water needed for agriculture while reducing the pollution associated with agricultural chemicals and animal waste, the authors wrote.

The so-called Green Revolution in agriculture produced a 2 percent increase in yields per year for 20 years, Battisti noted, primarily through development of new grain varieties along with fertilizer and irrigation.

“We’re really asking for yield gains comparable to those at the peak of the Green Revolution, but sustained for an unprecedented length of time — 40 years — and at a time when climate change is acting against us,” he said.

Also complicating matters is that many of the institutions involved do not work together closely enough to succeed, the authors charged. Then, too, there’s the continued resistance to crops such as corn and soybeans that have been genetically modified to be insect resistant and tolerant of herbicides.

“There has to be a lot of creative thinking, a greater blending of biotechnology and agriculture, and better coordination between private and public research efforts throughout the world for us to keep pace with the increasing demand for food,” Battisti said. “We need to be thinking about the long-term demands for food and the environmental and social ramifications of how we will produce it.”

There is no “silver bullet,” Battisti added; rather, the solution will have to involve a combination of things.

Specifically, it will mean changing agronomy, or the way humans farm, and in some cases, it will be a matter of changing varieties to more heat-tolerant versions.

There will also be the need for better education and irrigation, he pointed out, and “in some cases, there will have to be changes in the kinds of crops we grow.”

The major grains that are grown today — including wheat, corn, soy and rice — don’t tend to do well in high heats, Battisti explained.

Sorghum and sugar cane, on the other hand, tend to do pretty well if they get enough water. Teff — a crop that’s grown in parts of Africa — is another promising candidate, he pointed out.

‘Yields Will Go Down, and Soon’

Reactions to the report’s recommendations have generally been positive, particularly in the agricultural community, Battisti told TechNewsWorld.

“Occasionally we hear from a farmer up in Canada,” he noted. Even there, though, “by the time we get to the end of the century, they will have those reductions in yields too.”

Meanwhile, “anywhere south of San Francisco,” he concluded — “including Africa and most of Asia — yields will go down, and soon.”