BlackBerry Tries to Bring Back That Lovin’ Feelin’ 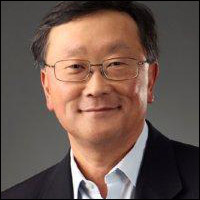 BlackBerry has announced new handsets and services aimed at moving the company forward as it tries to recover from a lackluster 2013.

The Q20 offers the classic BlackBerry QWERTY keyboard and experience on BlackBerry 10. It features BlackBerry’s physical Menu, Back, Send, and End buttons along with a trackpad. Last year’s Q10 had the QWERTY keyboard, but neither the navigation buttons nor trackpad.

The company apparently received many complaints from customers who missed those elements of the BlackBerry experience.

“I want these customers to know that we heard them, and this new smartphone will be for them,” said Chen.

The Q20 has a 3.5-inch touchscreen — the largest display on a QWERTY BlackBerry smartphone — a large battery, and a design including “premium materials” intended for reliability and durability.

It will be released in the second half of the year, with availability and pricing announced closer to launch.

The Z3 is aimed at emerging markets such as Indonesia, where it will debut in April. It is the first smartphone to emerge from the Foxconn partnership BlackBerry announced in December.

The touchscreen device runs on BlackBerry 10 (version 10.2.1, which also was revealed at the event), has a 5-inch display, and includes what the company described as a “long-lasting” battery. It includes apps and content geared toward the local market.

Among the phone’s features are BlackBerry Hub, BBM, FM radio and the BlackBerry 10 browser. It includes a Time Shift camera feature designed to let users capture group photos with everyone smiling and all eyes open.

Details on pricing and availability will be released closer to launch.

Meanwhile, BlackBerry revealed a number of new services. Among them is eBBM, a version of BBM intended for enterprise customers.

It also announced BlackBerry Enterprise Service 12, a platform designed to unite BES10 and BES5. BlackBerry hopes the platform will enable organizations to develop enterprise-grade applications for BlackBerry smartphones and other devices.

It focuses on multiple capabilities: backward-compatibility and future-proofing; multiplatform support with the addition of Windows Phone 8 compatibility; advanced service management; and support for all deployment models, including on-site, public cloud, private cloud and hybrid environments.

In the quarter to Nov. 30, BlackBerry reported a loss of US$4.4 billion and a 56 percent fall in revenue. Chen appears to be hedging his bets by focusing both on emerging markets and the enterprise sector.

“I think at this point John Chen is actively pursuing the low-hanging fruit for BlackBerry,” Ramon Llamas, research manager of mobile phones at IDC, told TechNewsWorld.

“That’s going to be enterprises — that’s going to be government. He’s also planning for those markets where BlackBerry has a good base. It’s no real surprise here that he’s going into Indonesia. Chances are he’ll go into other markets across southern Asia as well,” he said.

BlackBerry’s move away from the consumer market in North America, meanwhile, could be seen as puzzling.

“While there is enormous competition here in the States — for example with Apple and Google — there still is a huge opportunity here,” telecommunications analyst Jeff Kagan told TechNewsWorld.

“I hope they do well. I would like to be on the cheering section for BlackBerry once again. However, I really don’t understand why they’re not focused on major markets like the U.S.”