Broadband Video: Has Its Time Come?

Many video providers, particularly in the television and movie spaces, made significant strides to provide their content via a growing number of on-demand channels, including the Internet, in 2005.

For video providers, the decision to embrace on-demand distribution was born as a response to both the opportunity and the dilemma posed by broadband Internet and DVR growth. Although the peer-to-peer distribution of content is still far less prevalent for video than for music, it is clear that many video producers (Walt Disney, et. al.) want to proactively address the potential for piracy by releasing a growing number of titles via legitimate on-demand channels.

Also, many video providers see a true opportunity for on-demand content that goes beyond a US$1.99 download to include advertising models and the development of complementary programming specific to mobile platforms, such as the mobile phone.

We also define the categories by business models. For example, DVD + Electronic Delivery, Broadband Video Providers, and Hardware + Content services are mainly all user-paid services. In other words, consumers pay directly for individual content or for subscriptions for these services. 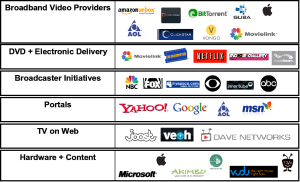 As we examine these main categories, we have the following thoughts as key takeaways:

Kurt Scherf is vice president and principal analyst for Parks Associates.
Get Permission to License or Reproduce this Article

Taking the Sting Out of the TV Ad Exodus

The Silver Screen, the Flat Screen and the Three Screens

The Wide-Open Gateway to the Connected Home

How Internet TV Gear Can Stay in the Picture

Social Networks: From Media to Monetization to Multiplatform

Is It Too Late for Homes to Get Smart?

Service Providers Compete on Technology – Why Not Support?

Are Web Video Providers on the Wrong Track?