Coverity cut its startup teeth seven years agotrying to figure out how to commercialize static analysis and softwarecode integrity. The company, whose software developer tools are usedby some of the biggest firms in the industry, released in NovemberCoverity 5, a completely reengineered software analysis solution.

Many companies are still looking for strategies to find softwaredefects. Coverity took a different tact by focusing on the defectsthat impact the software developer the most. The company’s fivefoundersstarted Coverity after completing a research project that showedsoftware code-writing rules could be managed and error-checkedefficiently through software analysis tools.

The four graduate students and their professor found that the conceptworked quite well. They started to apply the tool to open source. Thefeedback they received urged them to press forward, igniting the sparkthat blazed into the idea that they could make a company out of it.

The startup team bootstrapped for five years before accepting US$22million in funding in late 2007 to use for two acquisitions. By 2008,its fifth year in business, Coverity had over 400 customers and crossed$20 million in sales.

“We were in a good position in being able to take licensed code fromthe lab that we developed and turn it into a sellable product. It wasvery difficult to sell the technology,” Seth Hallem, CEO of Coverity,told the E-Commerce Times.

Coverity 5 is a defect mapping and defect impact management toolset.It locates errors, defects and failures that software changes canintroduce. It maps the defects across the code in onesoftware package and shows the impact across shared code in sisterproducts and applications, then automatically prioritizes them byseverity. In other words, it lays out how much it will cost thedeveloper if the defects cause a failure.

The product is specifically designed to helpdevelopment organizations mitigate the business risk of softwarechanges across their entire product portfolio.

“Mitigating the risk of software changes is one of the biggestchallenges for our global customer base, and we are tackling thisproblem head-on with Coverity 5,” said Hallem.

In getting Coverity off the ground years ago, one of the biggest challenges involved was keeping the company alive as thestartup team developed the product. Most companies in SiliconValley started with funding and launched with version 1.0 of theirsoftware product, noted Hallem.

“We had no funding and had to balance product development with lookingfor money sources and customers,” he said. “Five years from 2003, wesurvived on just customers and selling our product.”

Only their professor kept his day job, working with his formerstudents on a sabbatical. He returned to his Stanford University lab.The four former graduate engineering students worked full time fromthe birth of the fledgling company. That left the founders on theirown to figure out how to build the company the old fashioned way,Hallem said.

In the beginning, the founders realized that getting customers was allthat mattered. They had to generate revenue and eliminate all otherdistractions. At that early stage, nothing else mattered, according toHallem.

“Step by step we started to win over customers. We started with six orseven customers in 2003. Then we saw a growth factor of 10 in 2004,”he said.

Typical of any successful company, Coverity started to thrive becauseit was very successful in getting customers’ attention. That held trueeven in the tough sell of static analysis.

“Since December 2005, Coverity directed its focus on branding thecompany. It took on some funding money and brought on board a chiefmarketing officer, who focused on building brand,” Theresa Lanowitz,founder of analyst firm Voke, told the E-Commerce Times.

The successful branding meant the company was no longer justtechnically focused. The company has a set of solutions forenterprise. It partnered with others to branch out, she added.

Coverity’s goal is to provide a solution to a problem allsoftware users — and thus software developers — face. Software doesnot always work the way it is supposed to.

“Issues in the software industry is a 50-year-old problem that neededto be solved now. Software has taken on such a critical role,” Hallemsaid about his company’s mission.

All software companies start out with a firm view of what theirproduct will do, but over time, engineers lose track of some of thereliability goals. Coverity’s products help software engineers stay ontheir original track, according to Hallem.

Coverity has a clear field to achieve that goal for itself as well asfor its customers, and as Lanowitz sees it, the company faces minimal competition.

“Coverity is not in a feature war. It is not going after justfeatures. It has a number of solutions to offer customers,” she said.

The company has always been a step ahead of the market, and its founderssaw that faster is not always better, explained Lanowitz.

“Coverity is very well-positioned. The company is moving beyond thestatus quo. It is pushing the software life with a sell to the nextlevel,” she said.

In addition, 11 of the top 13 consumer electronics companies areCoverity customers. So are three of the top mobile device makers inthe world.

“What those stats mean to me is that these communities of softwaredevelopers who really have a need for high integrity software –software that does what is supposed to do — are recognizing that notonly is the kind of technology we’re offering important, but Coverityis the place to get it,” said Hallem.

Just as Coverity had no easy path to tread in winning over itscustomer list, it has no easy task in store to remainsuccessful. Perhaps its biggest challenge, Hallem stressed, is keepingat the bleeding edge of innovation.

Second to that top challenge is maintaining the balance of running thecompany with a firm academic focus.

Much of the company’s current challenge lies with the success orfailure of its just-issued Coverity 5 software suite. Strengtheningthe connection of software and product impact through Coverity 5 isthe message potential new customers have to get. Making thatconnection is a big step forward, admitted Hallem.

A lot ofinnovation is yet left to be done, noted Hallem.

Also in the company’s future is educating all software developers thatit is essential to ensure integrity at all points in the softwaredevelopment process.

“We have to continue to push that value to the market,” Hallem concluded.

App Testing From the Comfort of the Cloud

App Testing at the Speed of Change 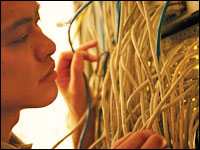