An invisibility cloak under development at Duke University is a new and improved version of one announced in 2006 by the same researchers. 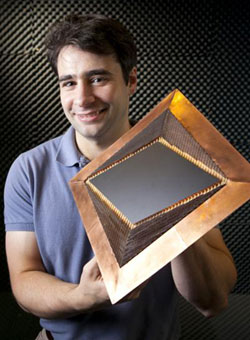 This latest version, developed by scientists at Duke’s Pratt School of Engineering, solves some of the problems the earlier one had with reflections of light. The previous device, which used parallel and intersecting strips of fiberglass etched with copper, reflected light along the edges and corners of the material and left a vague image.

The new cloak splits light into two waves which travel around an object in the center and re-emerge as the original single wave, with minimal loss due to reflection.

To get rid of those reflections, the researchers built the new cloak using copper and fiberglass strips, divided into four quadrants, so that each strip meets its mirror image at each interface.

Uses for the Technology

The researchers used metamaterials, which are artificial materials engineered to have properties that may not occur in nature.

Metamaterials can smooth out twists and turns seen in fiber optics, making them seem straight.

Military applications are the most likely use for cloaking technology.

“Cloaks make it hard to target you or even know if you’re there in the first place,” Rob Enderle, principal analyst at the Enderle Group, told TechNewsWorld. “Given other means of seeing, such as radar, cloaks are likely more practical for spying, being used in invisible drone ships, aircraft or land-based robots for instance.”

Hiding large objects would be less useful because their size and the noise they give off might lead to their detection, “but small objects or objects moving slowly that have low radar profiles would be ideal for this technology,” Enderle stated.

The Lure of Being Invisible

Back in 2006, Duke University demonstrated a working invisibility cloak. This was produced according to electromagnetic specifications determined by a new design theory proposed by Sir John Pendry of Imperial College, London, in collaboration with the scientists at Duke.

In January, scientists at the University of Texas at Austin’s Cockrell School of Engineering created the first free-standing 3D cloak. They hid an 18-cm cylindrical tube from microwaves by putting it in a shell of plasmonic metamaterial.

Research on Duke University’s latest invisibility cloak was funded by the United States Office of Naval Research and the U.S. Army Research Office.