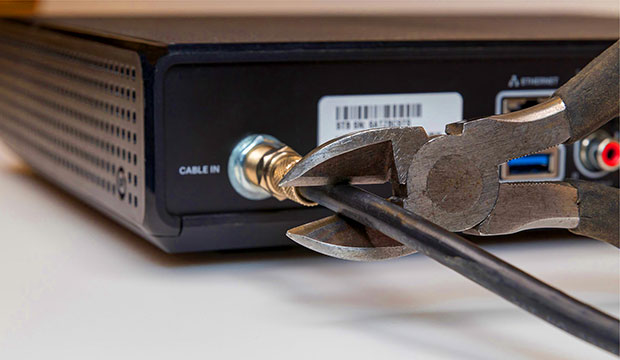 Cutting the cord has too long been an item on my to-do list. For those not yet familiar with the term, “cutting the cord” refers to the process of terminating a cable or satellite TV subscription and getting shows and movies by some other means. I finally did it and spent days afterward chiding myself for not making the change a long time ago.

This was a sweet accomplishment for two reasons. One, I finally had direct control over what I paid for my TV venue as well as the viewing packages I selected. Two, I tackled the project after literally spending weeks in bed suffering through and recovering from COVID-19.

I’m sure those long days with the cable TV menu displaying hundreds of overpriced but never-watched channels are what pushed me over the edge to cut loose my cable-tethered TV service. My cord-cutting achievement was also bittersweet.

I live in an area that has only one cable TV provider, Xfinity. Another option exists for Internet service from Verizon in some surrounding towns, but not in mine. AT&T also offers AT&T TV and DirectTV services in surrounding towns as well as my own. That price is currently the same monthly charge as Google’s YouTube TV service.

This means I still have to cling to the lone Xfinity service provider price for my high-speed Internet. Local contract restrictions that town leaders signed away years ago prevent any meaningful cable and Internet service competition.

Unless you live close to urban areas that have old-school free TV delivered via TV antennas, you can cut the TV cable but still have to keep the Internet for accessing other TV delivery platforms. So, I consider still paying Xfinity for my Internet access and piggyback VoIP phone service a discounted utility bill I would be paying anyway.

For the majority of consumers, cutting the cable TV cord is a mixed bag for a variety of reasons. The big misconception is that you will drastically lower your cable bill. That is not the case unless you can also pickup free TV reception from an antenna. Otherwise, you will only lower your cost by using video streaming platforms. You can bounce from free trials to low-cost offerings to find the ideal solution. Most streaming services do not require contracts, so you can explore different options depending on your viewing habits and your family’s needs.

For me, after being totally tethered to cable TV since 1985, I wanted a change that provided more viewing options at a lower cost. As long as I saved some money in the process, the freedom and flexibility were worth the initial money outlay and the one-time hassle of shifting gears. Cutting the cord is a tradeoff. I lowered my actual monthly bill (now for just Internet and phone) by around $100.

Your cable TV bill is filled with hidden costs and pricing schemes that change often. For instance, new subscribers start out at a lower monthly price thanks to ISP-sponsored promotions on premium services. Those promotions disappear after a while. Without notice, your next monthly bill is $50 or $100 higher. If you rent movies, your bill is even higher.

My monthly cable TV bill included a $14 monthly rental fee that would have soon gone up. The four TVs in the house cost an extra $7.50 for each set-top box plus the monthly charge for the TV program tier of $149. On top of that are the monthly fees for broadcast, regional sports, local and regional taxes, government fees and other unspecified charges totaling $12.68 per month. Double that to cover the Internet and phone at a “triple play” discount; and then take into account additional costs such as surcharges for exceeding the data cap on Internet usage and other miscellaneous fees.

You can reduce some of that recurring monthly cost by buying your own modem and WiFi router. Sure, that involves an outlay of potentially several hundred dollars. But this is a one-time expense. Think of how much more cash you waste in monthly equipment rentals year after year.

Replacing the rented ISP gear has some hidden benefits of its own. In my case, the ISP’s rented modem had only two Ethernet ports. That meant I could only connect two computers without resorting to slower wireless connections. I had previously bought my own TP-Link wireless router.

That device has four Ethernet ports. Routers connect to the Internet modem with an Ethernet cable. With the router’s Ethernet cable plugged into one of the two ports on the rented modem, I could only connect one computer to the modem.

But I gained four more Ethernet ports along with more security functions and much faster download and upload speeds for both hardwired and wireless connections on both the modem and the router.

I bought an Arris Surfboard gateway modem to replace the ISP’s rented device. The Arris Surfboard model has four Ethernet ports and two phone line ports that together doubled my connectivity abilities. Plus, I still have the added wireless network functionality and additional Ethernet ports from the TP-Link router.

Some Added Benefits to Owning

All those years I used the ISP’s modem, I had no access to its control panel to select options, update firmware, and ability to change passwords. Doing anything required calling the ISP’s tech support agents. That often was an exercise in futility because I could fully be the admin in charge of the TP-Link router I owned.

Before you start replacing hardware, though, keep in mind that your ISP generally will not help you solve service or performance issues that exist on your end. Therefore, you will be on your own in dealing with WiFi or TV playback issues involving your own equipment.

Buying your own equipment is not difficult. You can find the hardware in big-box stores and electronics outlets, on manufacturers’ websites, e-commerce portals and many digital stores. Keep in mind that modems and routers come in a variety of sizes and with an assortment of ports and features.

As a starting point, look for modems that support 300 Mbps (megabits per second). High-end devices will support speeds up to 1 Gbps (gigabit per second).

As a rule of thumb, home Internet speeds should be at least 15 Mbps for each device you plan to have running at the same time. Streaming 4K content for the best picture on a 4K smart TV will need a connection speed of at least 25 Mbps.

Expect a few stumbling blocks in setting up your new modem. While swapping connections is straightforward, you will need to call your ISP’s tech support service line to authenticate the new hardware before returning your rented gear.

That’s when the errors happened.

It took me more than two hours on the phone and a two-hour follow-up visit the next day by the ISP’s field tech to sort out the errors in setting up the back-end connections. The phone connected fine. The WiFi was spotty. The hardwired Internet was unstable.

For the record, the fault was not in my basic installation nor the equipment I bought. The activation call to tech support was supposed to convey the device’s serial number and MAC address and a few other tidbits. Then the modem should have fully activated. It eventually did.

The Viewing Platform Is Everything

The great freedom in cutting the cable TV cord comes with using the streaming service that best suits your needs. The cord-cutting industry today is a moving target. Various streaming platforms — Hulu, Philo, Sling, Fubo, and others — are rushing to provide alternative services to replace cable TV.

Prices vary. These options provide TV shows available for streaming one or two days after airing. Free trials are available, and you can unsubscribe at any time. If you already have a smart TV, you can check out many of these options for free.

Another option, especially if you lack a smart TV, is to use a streaming stick or dongle. These connect to your TV via USB or cable connection and let you stream your chosen service to your TV. A few options include Roku and Amazon Fire, or the latest newcomer — Google TV’s YouTube TV service.

Google TV offers one of the most attractive options that closely mimics the look and feel of cable TV service with its full-screen program guide and intuitive user interface. It provides live local TV channels based on your zip code among its 85 content offerings. It also gives you access to streaming movies and provides a smart TV-like interface with numerous built-in apps for viewing other options.

The Google TV dongle — which provides access to Google’s YouTube TV and other viewing options — is a bit pricey at $50 (available in electronics stores and Walmart, among others). After a two-week free trial, YouTube TV costs $65 monthly. That provides connections for three TVs simultaneously.

One of my four TVs is a smart TV running what used to be called Android TV. Android TV is being rebranded as Google TV. Either way, it has the Google Chromecast capability and Android interface with the YouTube TV app built-in. So, no Google TV dongle is needed.

Despite my procrastination in cutting the TV cord from my Xfinity bundle, the end results were worth the effort. It has exposed me to a new world of options for viewing TV.

According to industry reports, over six million cable customers cut the traditional cable TV cord in 2020. Former cable subscribers are expected to continue making the switch to a streaming video platform.

Cable TV providers, including Xfinity, are adapting their offerings to provide their own approach to video streaming at their own price point. That is a work in progress.

For my money, however, rather than add one more layer to the cable subscription jungle, I found that the approach I took was a far better solution. I am enjoying viewing options that I never knew existed. Those options continue to grow the more I explore the cordless world of non-cable TV.