Defining a Hero: Why It Matters That Apple’s CEO Is Gay Apple CEO Tim Cook has announced he is gay. Typically, when a CEO’s personal life becomes a major issue, it is a bad thing.

I do think this will have an adverse impact on Apple’s sales, but I also think it will have a beneficial impact on the world — and after some soul searching, I applaud Cook’s taking this action. I’ll share my thoughts about why a CEO doing something both controversial and potentially heroic is a good thing.

I’ll close with my product of the week: the Alienware 13 laptop.

CEOs often run into trouble when their personal life takes center stage. Steve Jobs was particularly aware of that, which is why you didn’t really hear much about his interests or private life. When on camera or in front of a reporter, he forced the reporter to talk about the product.

One photographer was told that if he didn’t actually take the picture Steve Jobs wanted, with the new iPod in front of his face, then Jobs would leave and the guy could get someone else for the cover. It became one of the most famous Apple covers ever.

Jobs understood that any ink focused on anything else didn’t move product, and he was focused like a laser on moving product.

Carly Fiorina struggled with folks who wanted to talk about being the first woman CEO of a major company, and she too felt it was a waste of time. Just fighting that fight became a huge distraction for her and HP, and it led to some really hard feelings between HP and key reporters at the time.

She then focused on politics and things went sideways — ironically, her political career was pretty short-lived as well.

Eric Schmidt over at Google has an infamous open marriage and a foot-in-mouth problem that would make Joe Biden proud. He is no longer CEO, though, and as chairman he has simply become a traveling embarrassment that Google seems to ignore these days. About the time his proclivities became visible also was about the time the board thought Google would be better off with someone else running it.

In the end, it doesn’t matter what it is — politics, marital infidelity (which is far more common in Silicon Valley than folks realize), sex or sexual orientation. When it becomes news, it can become a distraction, and the fourth quarter is a really bad time for a company like Apple to have another distraction.

Apple does have an incredibly powerful brand, however, and it is very popular with some very intolerant demographics. By going public at this time, Tim Cook is forcing an interesting choice: Become more tolerant, or lose the ability to be proud of a product that most Apple fans are connected to very tightly.

While I have little doubt some may choose to stay intolerant — many, if not most, likely will begin looking at the whole issue of sexual orientation a bit differently, and by the end of the quarter, they may give up their intolerance in order to continue to enjoy their beloved Apple product.

This suggests that some percentage of folks who are currently intolerant of gays — and given Apple’s reach, that could be a big percentage — may moderate their positions and move the tolerance needle significantly as a result. I expect many have a tighter and more consistent relationship with their iPhone than they have with their minister, and that will force some interesting changes in behavior.

So, while I think Apple likely will take some kind of an economic hit for Tim Cook’s move, I expect intolerance actually will take a bigger hit. While I think that in general, CEOs shouldn’t do things like this, I have to admit that in this instance, Cook’s action does qualify as heroic.

I also think it’s good for the human race, which could use a bit less intolerance. In the end, I wish more CEOs would put people ahead of product, because it would make the world a better place — and for this reason, I applaud Cook’s decision.

Often, when CEOs’ personal lives come into tight focus, it is because they are doing something wrong — like insider trading or having a company-paid mistress. However, from time to time, CEOs come into focus because they are doing something right — like stepping up to fight cancer, injustice, or as Bill Gates does, getting clean water and medicine to developing countries.

By focusing on the idea of greater tolerance, Tim Cook is doing something positive, and I think this kind of behavior should be encouraged.

The question to noodle on, and this takes me back to why most successful CEOs keep their personal lives under wraps, is this: Regardless of whether you agree with me about Cook, do you feel the same way about Chick-fil-A CEO Dan Cathy who came out with a strong anti-gay position? He also felt he was doing the right thing.

For me, it comes back to tolerance, which I think leads to a happier life, a better workplace and a stronger race, so I can support Cook and not Cathy, while not feeling hypocritical — but it is an interesting question to ponder, especially as we enter the Christmas season.

I’ve never thought of the Apple brand in connection to tolerance, but that changed for me last week, and I can’t help but think that’s a good thing.

Product of the Week: The Alienware 13 Laptop

Thirteen inches is the perfect size for a notebook computer, and I’m a fan of gaming, so naturally I’m attracted to a gaming laptop that has a 13-inch screen. Alienware makes a really unique laptop, and the Alienware 13 is no exception.

Starting at just under US$1,000, this is about as thin and light as you can get in something that is truly powerful. [*Correction – November 4, 2014]

It has a graphics amplifier option, which works kind of like a dock on steroids. It adds a fully featured desktop gaming graphics card to the mix when you are at your desk, giving you a no-compromise gaming experience without forcing you to have a second PC for gaming.

This accessory adds not only graphics performance but also more USB ports, so you don’t have to be plugging and unplugging a bunch of things when you come and go. 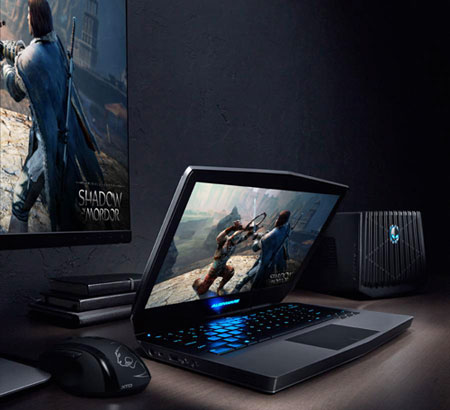 It has an optional high-resolution display — unusual for a laptop computer. At 2560×1440 pixels, it is stunning to look at and in the 4K or Quad HD class.

It has large copper heat sinks to move the heat out of the box so you don’t get heat throttling while gaming at home or on the road.

As with all Alienware laptops, you can change the LED lighting surrounding the system to any color that strikes your fancy.

For speakers, it has Klipsch-branded units tied to a Sound Blaster system for amazing sound out of something this small (though I expect most of us will still choose to use headphones).

The Alienware 13 is worthy of gaming lust, and I expect to see the guys on Big Bang Theory, who use Alienware laptops almost exclusively, soon shift to this one. Because it isn’t short of amazing, the Alienware 13 is my product of the week.

*ECT News Network editor’s note – November 4, 2014: Our original published version of this column incorrectly placed the price of the Alienware 13 as “starting at just under US$2,000.” Its base price actually is $999.