I’m not asking the question, “Could Apple follow?” because the amount of cash that would need to be raised would be mind-boggling. Most thought that taking Dell private was impossible, and once you get past “impossible,” degree doesn’t make that much difference.

With Apple stock down sharplyand at least a 20 percent potential level of headroom, which likely will go up if Apple continues to slide, theopportunity may increase to eliminate the impossible part.

Still, it’s worth looking into why a company might want to go private, and why it could be equally attractive to Apple’s board as it is to Dell’s.

I’ll close with my product of the week: the Amazing Surface Pro tablet, which I’ve had for a couple weeks now.

There are two primary reasons for going private. The first is largely economic and competitive. Youstep out from under a massive amount of compliance BS that surrounds everything you do and makes itnearly impossible to keep big strategic bets either funded or secret.

The second reason is that you can make huge bets much like you did as a startup requiring massivechanges that could set record levels of cost or result in short-term revenue shortfalls. In effect, as aprivate company, you can do the one thing a company can do that a person can’t — and that is to truly bereborn as something very different.

The market that created Dell is long gone, and Dell is trying to slowly remake itself into a firm thatis more in line with the world as it exists today. It’s been doing brilliant acquisition work, but it’sbeen hounded by its PC roots. The world is clearly moving to something both very different andseemingly very similar to what it had with mainframes and terminals.

Much like it is nearly impossible to make major changes to a race car while the car is on the track orduring a race, it is almost impossible to fully restructure a company while being pounded for quarterlyresults.

Think of “going private” as a big pit stop, and you get a better sense of the big things Dell willlikely try to accomplish that it can’t easily do as a public company, and you’ll have a better idea of why it wants to do this.

Apple’s problem is that it was recreated around the vision and image of one man — Steve Jobs — and he is gone. While the company has clearly been complimentary in recognizing Jobs’ role in achieving Apple’s success, it has also been in near complete denial as to how critical his contribution was.

If it wants to recapture anything like what Jobs did with Apple, it either has to recreate Jobs or recreate Apple so it no longer needs him. Either of these things would go far better if Apple weren’tconstantly pounded for meeting some revenue or profit measurement.

In the former case, though, ifit wanted to recreate a Steve Jobs-type role, it would be better to do it outside of the public’s eye, avoiding the need to announce what would undoubtedly be a long trial-and-error process.

If Apple follows the path it is currently on — which is looking more and more like the path Apple was onafter John Scully fired Steve Jobs — it’s pretty clear what the outcome will be. This time, however, there will be no Steve Jobs tohire and bring back — not unless Apple creates him.

If it wanted to do something truly dynamic and recreate Apple TV as a service or go truly verticalwith phones — bypassing the carriers — both moves would require massive bests and be far more easilydone as a private company.

You can see Apple struggling with making moves like this, but it isconstrained because were it to acquire a carrier, its stock would fall off a cliff. Still, the resulting vertically integrated carrier would have a greater chance of dominating the existing market than even AT&T does through Apple’s superior customer experience.

Like Dell, Apple is precluded from making any of the big changes it needs to make, and as itsstock continues to fall, management will increasingly be looking at ways to cut costs — avoiding buildingthe new Apple campus, and looking more and more like a group of folks trying to paddle up a too-quickly moving stream.

If Apple could get that stream to stop, even for a short time, maybe it could build a better boat to ride it down.

Dell is taking an incredibly bold and risky move in going private and in tying more closely with Microsoft. However, great gains often come after great risks are taken. The iPod, iPhone and iPad were all great risks that paidoff. Had Apple not made any of them, it would likely be gone today.

Apple needs to make some hugechanges either to recapture Steve Jobs’ benefits or find a structure that doesn’t need them. Making these changes while private would be far more possible than making them as a public company. Getting it donewouldn’t be trivial, but then when has Apple ever shied away from the impossible?

What makes the Surface line interesting isn’t the product, so much as what created it. Surface resultedbecause Windows 8 wasn’t being wrapped by the hardware that Microsoft felt would really show it off.

You see Microsoft, Intel and the PC OEMs have been somewhat dysfunctional for some time — all watchingApple’s success and pointing to each other as the problem. So each has been going out of its wayto see if it could go it alone. 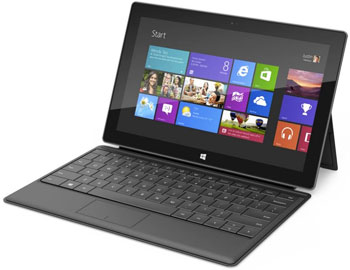 Intel tried doing its own OS — that didn’t end well. HP tried buyingPalm, resulting in the biggest short-term loss — at that time — in the firm’s history. A bunch messedwith Google Android or the Chrome OS with little success.

Surface is Microsoft’s response, and itwas done by a group in Microsoft — the Surface group — that loved hardware and wanted to do somethingtruly special.

The line shows it — from the magnetic keyboard to the power supply plug, to the touchscreen and kickstand, to the jet black finish. This is a line like no other, and it showcases the love of those who designed it.

Surface RT came out first because the ARM side of Windows 8 needed more hardware work, and it is stilllargely my favorite thanks to its massive 10-hour battery life.

Surface Pro comes as close as anyonehas come to get full Intel Core performance into a similar form factor. Yes — you take a hit on battery life,cost, and weight, but the result pushes the limit on what can be done in fully featured Windows 8 Inteldesign.

Sometimes folks have to push the envelope — and because Microsoft’s Surface Pro does that, it is my product of the week.