Here are a few things that stood out to me.

Despite its peculiar name — which recalls things like Air Force One, Capricorn One and Pepsi One — Salesforce1 is an important step for Salesforce, and it provided the IT guys with the love they’ve wanted for a while.

Salesforce1 unites some powerful properties that have seemed a little underused — including Heroku, Force.com, ExactTarget Fuel — and a mess of APIs to support mobile applications. The idea here is to give ISVs and partners an easier route to create and market applications on the AppExchange, and to make those mobile applications more stable.

This may seem kind of in-the-weeds to CRM users, but it’s a welcome maneuver on the part of Salesforce. The tradition of Dreamforce has paralleled Oracle OpenWorld: In the keynote, a transformative vision is outlined, and the next year is spent trying to prop up the facade, usually resulting in an incomplete version of the vision.

Dreamforce keynotes have been heavy on the vision of a re-invented way of using technology to enable business, but the reality has trailed by a year or two. Last year, mobile was front and center. This year, the route to that vision was mapped in the keynote, and while it might not be as scintillating to the sales guys, the IT guys appreciate the fact that they can now deliver what the sales guys will be clamoring for.

2. ‘The Internet of Customers’

Every year, Marc Benioff drops a new tagline or buzzword into the mix. This must make his marketing team very nervous as Dreamforce approaches — a virtual verbal sword of Damocles hangs over their heads each fall. They know it’s going to drop, but when? And what will it be?

This year, it’s “the Internet of Customers,” a play on “the Internet of Things.” The idea is customer activities abound on the Internet and are waiting to be taken advantage of by smart CRM users. As an example, he cited his electric toothbrush, which sends updates on his oral hygiene performance to his dentist.

I have issues with this concept. First off, I don’t want my dentist to know details of how I brush — as a customer, I find that creepy and invasive. This is something all businesses looking to trade on the Internet of Things need to be keenly aware of: Just because you can collect data on how customers are using things doesn’t necessarily mean you should collect it — and it doesn’t mean you should collect it without the customer’s consent.

Using this data in an effective way without spooking customers will require human skills that outstrip the technology. Companies that want to employ this data — like Salesforce — need to realize the need to be thought leaders advising their customers about the right ways to use this nontraditional customer data. Otherwise, they might as well be selling them hand grenades with the pins pulled.

Buried in the keynote, about 25 minutes after the scheduled end of the speech, was an appearance by Meg Whitman of HP to announce something called the “Salesforce Superpod.” This is a dedicated instance in the Salesforce multitenant cloud that will run on HP’s Converged Infrastructure.

Hardware announcements at a software show may seem pass, but this may be an important move for Salesforce as it attempts to penetrate enterprise businesses, especially in geographies with strict data location laws.

The limitations of its SaaS model meant that many large enterprises were off limits, and they left the field open to competitors with on-premise options. Two years ago, Salesforce rolled out its Data Residency Option as an attempt to court these businesses; look for the partnership with HP to enhance its ability to deliver private cloud-flavored solutions to businesses that couldn’t look at Salesforce in years past.

The jammed exhibition halls point to Salesforce’s ability to cast itself as the nucleus of its customers’ business software atom, with hundreds of other companies serving as the electrons and driving value in and deriving value from the CRM system at the center. Without Salesforce’s existence, and the footprint within business that the SaaS model provided, most of these businesses would not exist, and the rest would exist in very different forms.

However, it’s a tricky world to survive in. Half the CEOs of the exhibiting companies dream of being acquired by Salesforce, but that dream is tempered by the nightmare of Salesforce acquiring a competitor and then devouring their markets. These businesses in the ecosystem have to be very deliberate in the courses they chart.

As always, other CRM vendors have tried to stick a thumb in the eye of Salesforce at Dreamforce with various guerrilla marketing efforts. I’ve said this in the past: Doing this at a show where the vast majority of the attendees are Salesforce customers is a waste of time, and to those who aren’t customers yet the impression you give of your company is that you are petty, un-serious and desperate. The bigger the show gets, the smaller your efforts seem.

Let’s say I’m a buyer for a large enterprise. I have a serious decision to make about my company’s CRM. It involves an enormous budget and will determine the course of my company’s future. Who will I go with — the vendor successfully putting on the massive trade show or the company that sent a bunch of yahoos in T-shirts to yell about their CRM application on a sidewalk?

Salesforce itself used to pull these shenanigans until it became a confident, established company. Although it may stick in their craw, other companies ought to follow Salesforce’s lead, become mature, and knock off the antics. 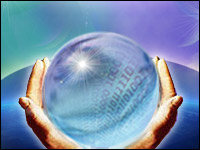