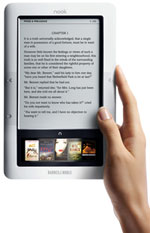 It may sound like an only-in-the-21st-century situation, as digital technologies vie to reshape the reading and browsing habits of bookworms. However, the new in-store browsing feature introduced for the Nook, part of a wider firmware update introduced on Thursday, is actually designed to boost sales of real-world books in Barnes & Noble stores and could be a key difference in its battle with Amazon’s Kindle and the Apple iPad, said IDC analyst Susan Kevorkian.

“It’s really smart. It’s a way to get people into a Barnes & Noble store who might not visit them otherwise and who might buy other things besides books along the way,” Kevorkian told TechNewsWorld. “Potentially a customer could use their Nook in the store to discover titles they may want to buy in physical version. This isn’t the killer app for the Nook by any means, but it does make sense. It gets people in the stores and lets them read complete texts that they would otherwise have to purchase.”

Nook users only have an hour to enjoy in-store browsing. But the other firmware features, which include the addition of Android versions of chess and Sudoku games, a Web browser and faster page-turns, are longer-term moves designed to cement the Nook as a legitimate contender in the e-reader sweepstakes.

“It suggests that Barnes & Noble’s direction with the device may be beyond a strict e-reader function per se. They’re adding functionality that enhances the experience,” Kevorkian said. “The Android operating system is flexible enough that it gives Barnes & Noble a lot of different options in terms of directions, and right now that’s exactly what e-reader vendors need — a lot of options.”

More options could help keep e-ink readers in consumers’ minds as they deal with the new choice of reading books on an iPad, or on other full-color tablet computers set to debut this year. Suddenly there are more factors for bookworms to weigh if they’re considering the leap to reading the latest Lee Child, Malcolm Gladwell or Stephen King best-seller on a device. A year ago they were looking at the price of an Amazon Kindle and its wide selection of titles that could be instantly downloaded. Now there’s the Nook and its rapidly growing feature set, the iPad and its media consumption choices (books, movies, TV shows, games), and whatever else is coming down the pike from competitors.

So when forums and bloggers report issues with reading the iPad’s color screen in sunlight, it could be a potential blow to sales of beach-reader summer blockbuster titles on that device. Or if the Nook’s dual screens — the larger e-ink one and the thin strip of color touchscreen underneath — prove to be incompatible for the eyes of older readers, it could affect sales to a key demographic.

When you consider the fact that Amazon has a Kindle for iPad application, and Barnes & Noble is said to be nearing completion on its version, the decisions for consumers can prove just as mind-boggling as the plot of a Dan Brown thriller.

“What you may see is that kind of real sharp break in the market, where we see devices like pure book readers like the Kindle, and then we start to see higher-end media consumption devices like the iPad, and then there will be some Android-type products coming out,” Gartner research vice-president Michael McGuire told TechNewsWorld. “What may get caught in the middle are those e-ink devices that are trying to be book readers and newspaper or maybe magazine readers. With magazine, their challenge is that they need color. A device that’s trying to be both newspaper and magazine devices but lacking color, we may see them get squeezed out.”

The Next Chapter in Digital Books?

The reading public is being retrained with all of these devices, according to Carl Howe, director of the Anywhere Consumer research division at Yankee Group; therefore there’s a lot of experimentation still going on with vendors. “We’re still figuring that out. We don’t even know what the right pricing models are. And the issues of portability of books in electronic format, that’s still a wild card,” Howe told TechNewsWorld. “The jury is out as to whether e-ink is the right thing for books.”

In contrast to reports of iPads being hard to read in bright sunlight, e-ink screens demand enough light for a pleasant page-turning experience, Howe said. Which will be the right solution? “Consumers get to decide. I don’t think pundits are going to decide one’s better than the others.”

Another thing to weigh in the e-book/tablet issue: weight. “Carrying around a Nook is like carrying a paperback. An iPad is like a hardback,” Howe said. “They’re both perfectly viable but they are different experiences.”

Lest anyone consider the coolness quotient of an iPad and all its media consumption features, keep in mind you’ll be paying a premium to access all that, Kevorkian said. “E-readers today are considerably less expensive. If you compare the Kindle to the entry-level iPad, it’s about half as expensive. That’s an important driver and sustainer of adoption, important for vertical markets like students and professionals, and big driver for schools and libraries.

“E-readers aren’t out of the game yet,” Kevorkian said.