E-Scooters: On a Road to Nowhere 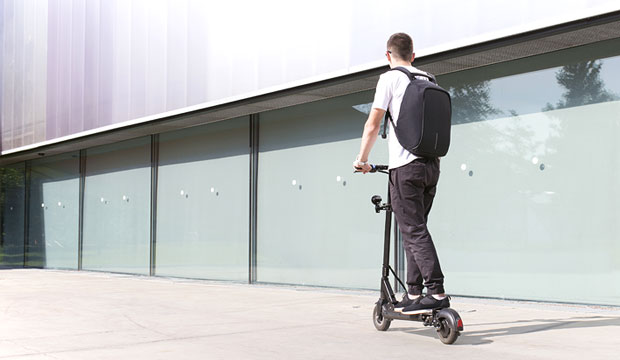 As summer winds die down here’s hoping one of the season’s most ridiculousand unnecessary fads goes with them.

Bird and Lime e-scooters — the vehicles for the two rival companies’ Mobility as a Service scheme — are just the latest twist on the foot-powered Razor Scooters that took America by storm in 2000.

Unlike Razor, which introduced electric-power models back in 2003, Bird and Lime utilize a subscription model instead of ownership.

Bird, Lime and another competitor, Spin, have similar business strategies — namely to provide simple, cheap transportation for the”last mile” — whether that means from a parking lot on the edge of adowntown district, or from subway or other mass transit stop — to the final destination.

The concept is similar to bike share programs that allow users essentiallyto rent equipment for a short trip. However, in the case of the scooters, there are no central docking stations.

Moreover, the companies have introduced their respective scooters invarious cities around the country without considering infrastructure,and currently there are no designated drop-off points. Instead the scooters seemingly are “abandoned” around urban areas.

Apparently this is exactly whatthe companies had in mind. The idea was that thosecurious individuals who stumbled upon one would try it out, and in the process create buzz that could turn these scooters into the next big thing.

The venture capital funding the companies have attracted, combined, so far has exceeded US$250 million. Clearly someone believes scooters could be thefuture.

I hope they are wrong!

Bird, Lime and Spin are hardly the first to think of MaaS as asolution to crowded roads, lack of parking and poormass transit.

By providing areasonably affordable way for individuals to get from point A to pointB, Uber and Lyft have showcased that fleets oftaxis aren’t necessary for mid-sized cities. Moreover, consider the vast amounts of dollars being spent on autonomous vehicle development.

Clearly there is a recognition that not everyone wants to drive or own a car. However,scooters aren’t the solution — at least not for America.

The original push scooters were little more than wheels attached toboards. They typically were used only by children — in part dueto the cobblestone roads of the era, which made riding precarious at best!

The first successful motorized scooter was the Italian-madeVespa, which was introduced in the aftermath of World War II. At the time, Italy’s economy was ruined. As the country struggled to recover from the war, few people could afford cars.

Unlikemotorcycles, scooters were something that women as well as men couldride to work, school and the market. Vespa and various competitormodels spread throughout Europe.

At the same time, Americans weremoving to suburbs and buying cars. Had it not been for the 1952 filmRoman Holiday, which featured Audrey Hepburn and Gregory Peck riding aVespa, those scooters might have gone unnoticed in the UnitedStates.

Fast forward to 2001, when inventor Dean Kamen rolled out the SegwayPT — a device that Steve Jobs reportedly expected to be as biga deal as the PC. John Doerr, the venture capitalist behindNetscape and Amazon, proclaimed it would be bigger than the Internet.

There were even proclamations that cities might be retrofitted, as Segwayscould alleviate congestion on the roads and be an alternative to cars.

Some of that probably sounds familiar, even if the Segway doesn’t ring a bellimmediately.

For those who don’t have Segway memories, it is a two-wheel platformwith a handle. Instead of spurring a transformation in cities, it largelyhas been relegated to tourist destinations. Occasionally it is used bypolice officers in urban areas.

Segways, much like today’s Bird and Lime scooters, have afundamental flaw: They lack the required infrastructure tomake them practical.

Sidewalks — especially in the crowded urban centers of New York, Philadelphia, Boston, Chicago, San Francisco and cities — aren’t ideal for a motorized vehicle that moves at a speed far faster than people can walk.

The Segway PT has a maximum speed of 12.5 miles per hour, which isjust under a 5-minute mile! The new e-scooters from Bird, Lime andSpin can carry an adult weighing up to 200 pounds at a maximum speedof 15 mph. At that speed, an accident involving a pedestrian and arider could be serious — even fatal.

There have been suggestions that perhaps these devices should berelegated to the bike lanes in cities, but that raises another issue.Shouldn’t the bike lanes be for bicycles?

As an avid cyclist, I am the sort of rider who has spenta not-so-small fortune on bicycles. I wear cycling kit, includingshorts and jersey, helmet and gloves. I don’t just look the part when Iride, however — I know the rules of the road.

Most states and many communities have lawsagainst adults riding on the sidewalk, especially at high speeds –which is taken to be anything over 10mph.

As a cyclist, I am used tosharing the road with cars, even if the cars aren’t always eager toshare them with me. So maybe I’m a bit smug or even self-righteous,but in the few cases so far where I’ve seen e-scooters in the bikelanes, it hasn’t made me happy.

First and foremost, as someone used to dealingwith cars, I’m very aware of my surroundings when I’m on my bicycle. However, many of the drivers of e-scooters I’ve observed have seemed almost oblivious to the world around them — as if mobility gave them the right to tune out.

Second, I’m prepared for a crash or accident with gloves andhelmet. Those riding on e-scooters are not.

Finally, bike lanes are far from ideal even for bikes. Too often, they’re strewn with broken glass and debris. They have way too many potholes and large cracks. A bicyclehas large wheels and tires that can navigate the obstacles.

To date it is unclear how many accidents there have been involving e-scooters, but sadly, at least one individual already has been killed already in an accident involving one. A 24-year-old man waskilled this past week in Dallas after he fell while riding an e-scooter home,The Washington Post reported.

Although this is the first reported death, more accidents are waiting to happen.Several media outlets reported that a woman was spotted on ane-scooter on I-77 in Charlotte, North Carolina!

Bicycles and mopeds are prohibited on Interstates, of course — with the exception of somerural parts of New Mexico –and it should be obvious that e-scooters would fall into that category. However, given the influx ofthese devices we shouldn’t be surprised to see these in places notdeemed appropriate or even legal.

At the City Level

The legal issues certainly will be resolved as cities across thecountry are faced with how to regulate use of e-scooters and enforce the new rules.

The Los Angeles City Council this week voted 13-0 to approve a new setof rules for dockless e-scooters, along with a citywide cap of3,000 e-scooters in total.

That number could be increased if thecompanies agree to operate in disadvantaged communities. In addition,all the companies will be required to carry $5 million commercialgeneral liability insurance.

Other cities have made it clear that e-scooters aren’twelcome. Beverly Hills and West Hollywood have voted to ban them, and other communities across the country have instituted their own rules.

Perhaps some communities see a potential revenue stream from thee-scooters via parking tickets. The Indianapolis City Council this summerapproved a $25 fine for scooters parked in doorways, alleys,handicapped spots, bus stops and even rain gardens.

The University of Texas in Austin recently announced that it willimpose a $150 fine for improperly parked e-scooters on campus. While the fines will be addressed to the companies, there isspeculation that those fines could be passed down to the last user. Ase-scooters do rely on GPS, it would be easy enough to determine wholeft the scooter where and when.

Companies such as Bird, Lime andSpin — and others that are bound to pop up — need to understandthat America’s infrastructure isn’t designed for e-scooters. Bike lanes aren’t meant to be catchalls, and sidewalks are not ideal either.

The Vespa didn’t catch on in America because Americans could affordcars in the 1950s and 1960s, and the Segway didn’t catch on in 2001because inner cities already were retrofitted to adapt tocars. The suburbs were made possible by car ownership!

Of course, it may not always be this way. The thing to remember isthat human cities have been around literally for eons. Damascus, Syria — widely believed to be the oldest continuously inhabited city in theworld — dates back at least 11,000 years.

That city certainly wasretrofitted many times for the transportation of the era, fromhorse-drawn carts to railroads and cars.

In those 11,000 years of human cities, carshave been around only for 150 years. In most cities, they have beenplentiful and common for less than 100 years. Even after World War I,horse drawn wagons were common in New York and certainly acrossEurope.

Much attention has been given to the progress of bicycles in cities such asAmsterdam and Copenhagen, but that is largely because those cities never were all that car-friendly in the first place, and bicycle use evolved side-by-side with the car. That hasn’t happened in America, and in fact barely has happened even in other parts of Europe.

Cities where Vespa-style scooters remain popular — Naples, Rome,Florence, Barcelona and Lisbon, among others — have mild weather, smallcity centers where people often don’t live in far-flung suburbs, androads that aren’t ideal for cars. That is why the motorized scootersbecame, and remained, popular — not because the scooter replaced thecar.

American inventors and proponents of MaaS need to look at what makesUber and Lyft popular in the cities and suburbs alike. It provides aquick, affordable ride.

E-scooters are a novelty. They threaten to crowd sidewalks,bike lanes and roads alike, and people could get hurt, even killed in theprocess. Before anyone else dies, the e-scooter should sputter and die instead.