Earth-Sized Planets May Be Everywhere – but How Many Are Earth-Like?

Nearly one in four stars similar to the sun may host planets as small as Earth, according to a new study funded by NASA and the University of California.

Astronomers used the W.M. Keck Observatory in Hawaii for five years to search 166 sun-like stars near our solar system for planets of various sizes, ranging from three to 1,000 times the mass of Earth. The results show more small planets than large ones, indicating small planets are more prevalent in our Milky Way galaxy.

“We studied planets of many masses — like counting boulders, rocks and pebbles in a canyon — and found more rocks than boulders, and more pebbles than rocks,” explained Andrew Howard, an astronomer at the University of California at Berkeley and lead author of the study. 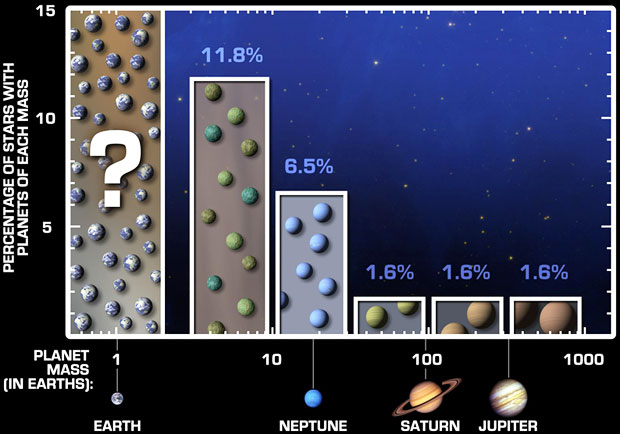 The data from a new survey, depicted here in this illustrated bar chart, show a clear trend. Small planets outnumber larger ones. Astronomers extrapolated from these data to estimate the frequency of the Earth-size planets — nearly one in four sun-like stars, or 23 percent, are thought to host Earth-size planets orbiting close in. NASA/JPL-Caltech/UC Berkeley

The study, which is the most extensive and sensitive planetary census of its kind to date, was published in the Oct. 29 issue of the journal Science.

‘You Can’t Actually See the Planets’

NASA’s Kepler spacecraft is also surveying sun-like stars for planets, and is expected to find the first true Earth-like planets in the next few years.

For the present study, however, the researchers focused their search within 80 light years of Earth using the radial velocity, or “wobble,” technique.

“You can’t actually see any of the planets,” Paul Czysz, professor emeritus of aerospace engineering with St. Louis University, told TechNewsWorld. “What they do is infer from the ‘wobble’ of the sun that there’s something going around it, and infer from that the mass and distance that it probably has to be.”

The search was confined to planets orbiting within 0.25 astronomical units of their stars, or a quarter of the distance between our sun and Earth.

“During planet formation, small bodies similar to asteroids and comets stick together, eventually growing to Earth size and beyond,” Howard explained. “Not all of the planets grow large enough to become giant planets like Saturn and Jupiter. It’s natural for lots of these building blocks, the small planets, to be left over in this process.”

Extrapolating from the survey data, the researchers estimated that 23 percent of sun-like stars in our galaxy host Earth-sized planets.

“This is the statistical fruit of years of planet-hunting work,” principal investigator Geoff Marcy, also of the University of California at Berkeley, explained. “The data tell us that our galaxy, with its roughly 200 billion stars, has at least 46 billion Earth-size planets, and that’s not counting Earth-size planets that orbit farther away from their stars in the habitable zone.”

‘Only One Has a Possibility of Water’

Indeed, how many such planets are capable of hosting water — a key requirement for life — is another question.

“Of the ones they’ve found so far, only one has a possibility of water,” Czysz pointed out. “Most of the planets they found are around fairly large stars, and they’re fairly large gas planets between the size of Jupiter and Neptune.”

It’s a very narrow band of conditions within which water can exist, Czysz explained.

“If you’re on Venus, the radiation from the sun is too warm to allow liquid water,” he noted. “If you’re on Mars — if it were massive enough to hold an atmosphere, which it isn’t — it might be possible to have some liquid water, but it’s at the outer edge of being too cold.”

Rocky planets, in other words, are all fairly close to their sun, while further out — where it’s cold — “it’s the gas planets,” Czysz said.

It is still an important discovery that there are planets going around those other suns, Czysz said.

Nevertheless, the Milky Way is 100,000 light years across.

The reality, of course, is that “you haven’t gone very far,” he concluded.