Japanese manufacturer Murata has unveiled a new monolithic ceramic capacitor that is one-quarter the size of the one mainly used in smartphones.

The capacitor will be exhibited at Murata’s booth at the CEATEC Japan 2012 conference and exhibition, to be held in Chiba City October 2-6.

“These tiny capacitors are what makes it possible for us to have the supercomputers that we call mobile phones,” Carl Howe, vice president of research at the Yankee Group, told TechNewsWorld. “They’re an essential part of any electronic device, and the smaller the capacitors are, the smaller you can make a device that uses them.”

The company plans to ship samples at the end of fiscal 2013. Murata has not yet decided on the size of the new capacitor’s case.

Ceramic capacitors are the most widely produced and used capacitors in electronic equipment. Murata says about 400 to 500 of them are used in some of the latest smartphones.

A ceramic capacitor is a fixed capacitor that is made from alternating layers of ceramic and layers of metal. The metal sheets act as electrodes. 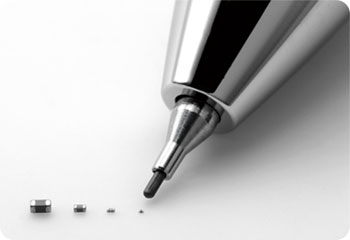 Monolithic capacitors consist of thin dielectric layers interleaved with staggered metal-film electrodes, meaning that the ends of the electrodes are not lined up vertically. A dielectric is an electrical insulator that can be polarized by an applied electric field.

Leads are connected to the alternate projecting ends of the electrodes, and the assembly is compressed and sintered to form a solid monolithic block.

Sintering is a process traditionally used for manufacturing ceramic objects. It’s used to make a solid block out of powders. The powdered material is held in a mold and heated to a temperature below the melting point to create the solid piece.

The Mote in the Smartphone’s Eye

“To the average person, today’s surface-mount capacitors look like coarse dust in a vial,” the Yankee Group’s Howe said. “Murata’s shrinking them to make them fine as dust.”

There is a growing need for ultra-small components that can support high-density mounting because volumetric efficiency is a key factor in product design, Murata said.

In other words, the more features you can pack into a component of a given size, and the smaller that size, the better.

“Shrinking a capacitor and having it store the same number of picoFarads, which are a measurement of capacitance, means making it more efficient,” Howe said. “You have to make it better to make it smaller.”

One picoFarad is the smallest value of capacitor available for general use in electronic design.

Honey, I Shrunk the Capacitor

“I don’t think we’ve seen the lower limit [in size] yet, and there are a number of other materials and techniques being researched to make capacitors even smaller,” Enderle told TechNewsWorld. Capacitors “haven’t enjoyed the same development focus as transistors over the last few years, and appear far from their potential limits.”

Capacitors don’t fall within the ambit of Moore’s Law, which states that the number of transistors on integrated circuits doubles approximately every two years, because that law “is a transistor law, not a capacitor one,” Howe pointed out.