The EFF and law student Kendra Albert earlier this year petitioned the U.S. Copyright Office for an exemption to the Digital Millennium Copyright Act’s anticircumvention provisions (Section 1201), which would allow individuals and institutions to modify games so they remain playable after servers are shut down by the games’ publishers.

The point is to afford legal protection for game enthusiasts to be able to use the games they own, as well as for academics and museums to preserve them for educational or historic purposes.

The ESA, which is the trade group for the video game industry, submitted comments to the Copyright Office arguing that the proposed exemption was too broad, and that it could jeopardize the availability of copyrighted works by enabling — even encouraging — the use of pirated games, and the unlawful reproduction and distribution of infringing content.

“Section 1201 is often used by the entertainment industries not to prevent copyright infringement but to control markets and lock out competition,” wrote EFF staff attorney Mitch Stoltz in a blog post last week. “So it’s not surprising that ESA, along with MPAA and RIAA, have written to the Copyright Office to oppose this exemption.”

The video game industry is far from the only entertainment sector impacted by the piracy problem. However, the film and music industries both have embraced the challenge of preserving past works for future generations, and exemptions to the DMCA have been provided in other cases, in spite of objections.

“Certainly the music and movie industries have also tried to lock up their work behind digital access controls, just like the video game industry. Just like game publishers, movie studios and music labels have often claimed that allowing anyone to bypass those access controls, even to make legal and important uses that don’t require permission from the copyright holder, would destroy their industries,” Stoltz told the E-Commerce Times.

“The Copyright Office has created exemptions to the DMCA for things like amateur remix video and documentary filmmaking, the music industry has largely abandoned digital locks on music — and the sky hasn’t fallen,” Stoltz added. “The same will happen for video games. History shows that legal protection for things like historic preservation won’t harm the industry.”

The ESA and many of its members have participated and supported multiple museum exhibitions and educational initiatives related to video games. Among them were a 2012 exhibit at the Smithsonian American Art Museum titled “The Art of Video Games,” which explored the evolution of games as an artistic medium and featured playable video games from a variety of eras. The exhibit toured the U.S., and two video games were added to the museum’s permanent collection.

However, the ESA has taken a firm line against any exemption to copyright law that would allow modification of games, even in the name of preservation, arguing that exceptions to Section 1201’s blanket ban could send a message that “hacking” is lawful.

The EFF countered by suggesting that a great deal of hacking is not only lawful, but also essential. Many programmers learn their trade by tinkering with existing software.

“There is a question of piracy, but equally important is preservation of the medium,” she told the E-Commerce Times.

“It is a delicate balance of historical conservation and maintaining piracy concerns,” Meloni maintained. “Rather than going head to head with each other, it would be more productive if groups such as the EFF and ESA could create a solution that benefits everyone — not just the corporate interests of a few.” 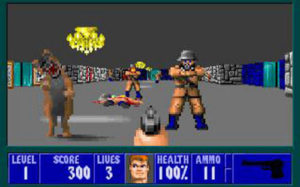