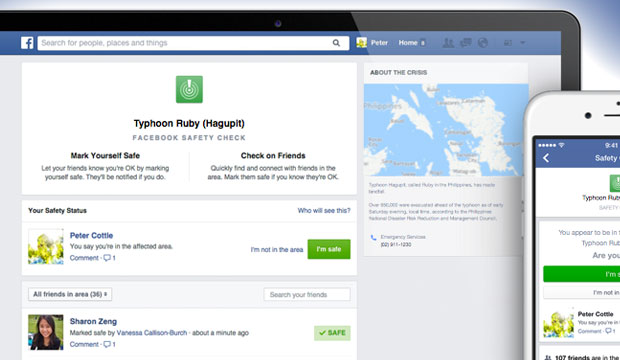 Facebook on Sunday activated its Safety Check feature for the first time in the United States, in the aftermath of the mass shooting at an Orlando, Florida, night club that left 49 people dead and scores more wounded.

Last year’s terrorist attacks in Paris marked the first time Facebook activated the feature for a crisis other than a natural disaster. Safety Check lets users notify loved ones and friends that they’re safe. Users can check on people thought to be in the affected area, and mark friends and loved ones as safe when they receive confirmation.

Facebook earlier this month announced that it had tweaked Safety Check to streamline deployment anywhere.

“Many people practically live on Facebook, so this feature is a convenient way for people to notify others of their status,” said Mike Jude, a program manager at Stratecast/Frost & Sullivan.

“Rather than having to call many people discretely, this allows anyone on your Facebook network to obtain your status,” he told TechNewsWorld.

“We’re excited to continue working on Facebook’s role in crisis response over the coming year, as well as to test new ways for the community to initiate and spread Safety Check in the coming weeks,” Facebook’s Peter Cottle wrote on June 2 — little knowing that the upgraded system would be needed just 10 days later.

Here’s how it works:

Facebook has created a proactive testing system that performs shadow launches every 12 hours for a variety of geographic areas, sending out notifications to a database rather than to members.

The number of people “found” is compared against historical expected bounds, and the results are reported.

Facebook has built an internal tool that enables trained teams across time zones to activate Safety Check any time of day for any event anywhere, without needing an engineer to do so.

“Police tend to get inundated during [emergencies], and they have very little information until well after the event is over,” observed Rob Enderle, principal analyst at the Enderle Group.

Facebook’s “massive user base could make Safety Check a valuable resource for people trying to establish the whereabouts and condition of loved ones,” said Charles King, principal analyst at Pund-IT.

Safety Check’s effectiveness depends on how — and how well — users utilize it,” he told TechNewsWorld. “If they don’t buy in, Safety Check will be, at best only partially successful.”

If users leave geolocation off, that could be a problem. “You could always enable geolocation after the fact, but most people will have their hands too full coping in a disaster to fiddle with their smartphones,” King noted.

Safety Check will probably “get a big spike initially. Then, as time goes on — three or six months or a year later — people will get complacent,” suggested Laura DiDio, a research director at Strategy Analytics.

One potential Safety Check problem is the possibility that it might send out a false alarm.

Facebook earlier this year apologized for mistakenly sending notifications to the wrong people following a suicide bombing in Pakistan. Some users in New York and Virginia got text messages on their mobile phones asking if they were affected by the explosion with no mention of where it had taken place.

Safety Check “is a good thing but it’s not foolproof,” DiDio told TechNewsWorld. “Still, it’s better than nothing.”