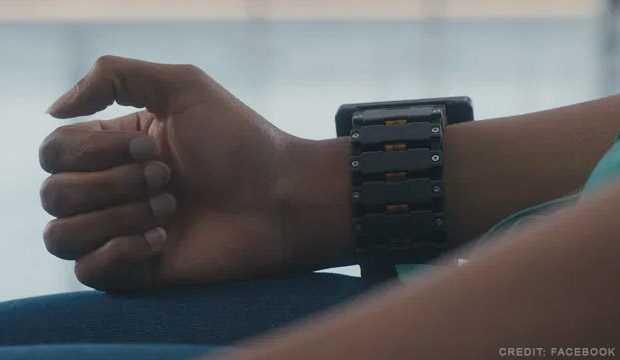 Creating a smooth functioning interface for smart glasses that allows its wearers to operate in an augmented reality world has proven to be a challenging task, but Facebook believes it may have a solution on the human wrist.

In a blog published last week, the company revealed it has been working on a wrist controller for its AR glasses.

Facebook explained that the wrist is a traditional place to wear a watch, meaning the controller could reasonably fit into everyday life and social contexts.

It’s a comfortable location for all-day wear, Facebook noted. It’s located right next to the primary instruments used to interact with the world — the hands. That proximity can bring rich control capabilities of the hands into AR, enabling intuitive, powerful, and satisfying interaction.

In addition, Facebook pointed out that a wrist-based wearable has the additional benefit of easily serving as a platform for compute, battery, and antennas while supporting a broad array of sensors.

To produce input for the wrist controller, Facebook chose to use EMG — electromyography — which uses sensors to translate electrical motor nerve signals that travel through the wrist, to the hand, into digital commands that can be used to control the functions of a device.

Facebook explained that those signals can communicate crisp one-bit commands to a device. The signals are so clear that EMG can understand finger motion of just a millimeter. Input can be effortless. Ultimately, it may even be possible to sense just the intention to move a finger.

Initially, EMG will provide just one or two bits of control — the equivalent of tapping on a button — but eventually the controls will become richer. A person will be able to “touch” and move virtual UIs and objects and control virtual objects at a distance.

Facebook maintained that ultimately a person will be able to type at high speed with EMG on a table or their lap — maybe even at a higher speed than is possible with a keyboard today.

“What we’re trying to do with neural interfaces is to let you control the machine directly, using the output of the peripheral nervous system — specifically the nerves outside the brain that animate your hand and finger muscles,” Facebook Reality Labs Director of Neuromotor Interfaces Thomas Reardon stated in the blog.

Eleftheria Kouri, a research analyst with ABI Research, explained that the wrist controller will be able to address some of the challenges that exist with other user interface and input methods like voice commands or built-in buttons on the glasses.

“For example, voice control is the primarily UI in the majority of commercially available AR smart glasses that allows hands-free interaction,” she told TechNewsWorld. “However, sometimes voice engines fail to accurately understand and process a user’s commands, especially in noisy environments.”

“At the same time,” she continued, “voice commands are not considered ‘socially acceptable’ in public places, which is a challenge for consumer AR smart glasses that target outdoor usage.”

“The wrist band controller and neural interface enables seamless and more natural and realistic interaction with digital content — similar to gesture control — something that plays an important role in creating user friendly and ‘socially acceptable’ experiences,” she said.

“Also, this interaction method is more accurate and responsive, minimizing the risk of error and delays,” she added.

Ross Rubin, the principal analyst at Reticle Research, a consumer technology advisory firm in New York City, explained that the idea behind the wristband is to provide feedback for a range of touching scenarios from simple interface elements, like pressing buttons, to sensing textures in a virtual world.

“Even though you’re not feeling the sensation at the point of contact — the sensation is on your wrist, not your fingers — it’s certainly a richer experience than feeling nothing and getting no tactile feedback from interacting with objects,” he told TechNewsWorld.

However, efforts in the past to use EMG have been disappointing, maintained George Jijiashvili, a senior analyst with Omdia, a research and consulting firm inLondon.

“The ill-fated Myo armband by Thalmic Labs/North highlighted the complexities involved in making a device that can accurately track and translate the human body’s EMG signals,” he told TechNewsWorld.

Nevertheless, he added: “Facebook is laser-focused on AR and VR, and its growing Reality Labs team and abundant finances suggest that it has a much higher chance of success where others have failed.”

David MacQueen, executive director for the global wireless practice at Strategy Analytics, maintained that voice and gesture are better than any solution that requires an additional piece of hardware.

The exception to that may be integration with existing hardware. “If Facebook can integrate with, say, Apple Watch or Android Wear devices, then those users aren’t carrying yet more hardware with them beyond the glasses themselves,” he told TechNewsWorld.

He speculated that Facebook may be having trouble making a pair of AR glasses that can support the requirements for gesture recognition — front facing cameras and a lot of computational overhead. “If they want to go to market with a simpler and cheaper device, then a wrist controller may be a sensible option,” he reasoned.

“The wristband is a creative way to hack away at some of the issues involved with navigation and physical feedback from artificial stimulus, but leaves a lot to be desired,” added Josh Crandall, CEO and cofounder of NetPop Research, a market research and strategy consulting firm in San Francisco.

“It’s really a transitional R&D device rather than a deployable consumer technology,” he told TechNewsWorld.

“I don’t think that Facebook really believes that the wristband will unlock a new world of possibilities either, but rather an effort to be recognized as an innovator,” he said. “After all, they need to show some success for the investments they have made in the space.”

Crandall noted that while research has been progressing with AR and VR for at least a decade now, the technologies are still at the very beginning of their development phase.

“Creating a ‘reality’ that can be controlled effectively is a really hard goal to accomplish,” he observed. “Facebook has invested significantly in the dream of this technology with the purchase of Oculus and other companies, and as such is looking for any way to prove its position as a leader in the space.”

As for the market for VR and AR devices, it’s mostly a VR world. “It’s more of a VR market than an AR one at this point, especially for consumers,” said Jitesh Ubrani, a research manager at IDC.

“The VR market recently received a big boost thanks to the launch of the Quest 2 and so far shipments have been growing,” he told TechNewsWorld.

“On the AR side,” he continued, “overall volumes still remain relatively small and mainly focus on the enterprise segment.”

“Most AR headsets are used by businesses; and as a result they tend to have designs that are OK to use in a workplace but not outside it,” he said. “The few AR headsets that are aimed at consumers still face some design challenges and often lack a credible use case.”

“We’re a few years away from AR glasses reaching consumers, as there are many technical challenges to overcome,” he added. “The AR glasses need to be lighter and look more like traditional glasses in order to gain consumer acceptance and on the software side, they need to offer experiences that cannot be replicated anywhere else.”

However, Ben Arnold, an industry analyst with the NPD Group, was more optimistic about a consumer AR glasses offering. “The noise around smart glasses continues to get louder,” he told TechNewsWorld. “I would expect to see a pair of AI glasses by this time next year.”