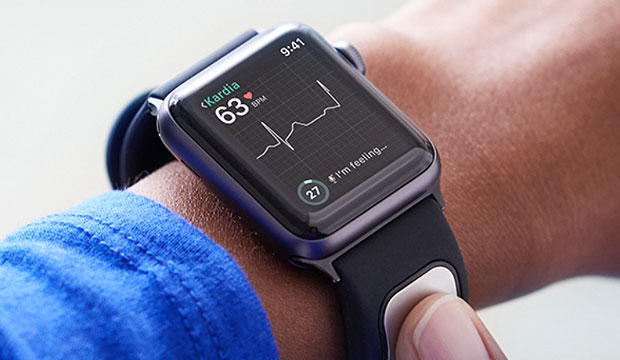 The U.S. Food and Drug Administration has given the KardiaBand its stamp of approval, AliveCor announced Thursday. Thedevice is the first FDA-cleared personal electrocardiogram (EKG) accessory designed for use with an Apple Watch.

The KardiaBand allows users to take EKG readings in order to distinguish between normal sinus heart rhythms and atrial fibrillation (A-fib), the most common type of serious heart arrhythmia, which can lead to strokes or other heart-related problems.

The KardiaBand can record an EKG in just 30 seconds. The user simply touches an integrated sensor, and the results are then displayed on the face of the Apple Watch.

AliveCor also announced the release of SmartRhythm, a new feature in the Kardia app. Itrelies on artificial intelligence to monitor a user’s heart rateand determine the correlation between heart activity and physicalactivity. It can detect when a user’s heart rate and activity are outof sync and promptly send an alert.

“These capabilities will allow people to easily and discreetly checktheir heart rhythms when they may be abnormal, capturing essentialinformation to help doctors identify the issue and inform a clear pathof care to help manage A-fib, a leading cause of stroke, and otherserious conditions,” he added.

KardiaBand, which is now available for US$199, works in conjunction with AliveCor’s Premium$99 a year subscription service. The combined system providessubscribers with SmartRhythm notifications on Apple Watch, unlimitedEKG recordings, and automatic detection of A-fib or normal sinus rhythms.

Users can email unlimited EKG readings to anyone, including adoctor, and are provided with unlimited cloud access to all EKG readings, along with weight and medication tracking. All ofthis data is mailed to users in a monthly paper report with fullreadings from the device.

Heart of the Matter

Although AliveCor’s KardiaBand is the first EKG device available forthe Apple Watch, it is just a small part of Apple’s fitness-monitoring efforts.

“There are millions of people with frequent or infrequent heartarrhythmia who could benefit from a band like KardiaBand,” said RogerEntner, principal analyst at Recon Analytics.

“It would help diagnosis and speed up treatment in cases where andwhen it occurs, and it would certainly be a driver for people who haveheart arrhythmia, which is often a side effect of diabetes and otherheart disease,” he told TechNewsWorld.

One issue might be how easy, convenient and even comfortable such adevice would be to wear, especially for extended periods. Further, someusers might rely on these devices as replacements for regulardoctor’s visits.

“In general, early warning gives more information and is mostly not tooinvasive, but of course people still need to be treated by healthcareprofessionals,” he told TechNewsWorld.

“The app can’t do anything but tell you what’s going on at a detailedlevel, so it makes sense for people at risk,” Kay noted.Still, “the device and app are a diagnostic tool to make it easier to treat,not a replacement for treatment,” Recon Analytics’ Entner added. “Onlya doctor can do that.”

As health costs continue to rise, smartwatch monitoringdevices could offer some financial benefits. Users might not feel the need to rush to theemergency room every time they felt slightly off.

“This is the old ‘Swiss Army Knife’ versus dedicated functionwearables debate,” explained Robin Raskin, founder of Living in Digital Times.

“From my point of view, smartwatches won’t really take off until theyhave some super useful functionality in the workplace, like payments orphysical access to buildings and computers,” she told TechNewsWorld.

More widespread acceptance may come via a mobile phone attachment, however, so it is unlikely that KardiaBand will broaden the smartwatch market, suggested Raskin.

“I don’t think too many people would buy and wear a device like theKardiaBand without the need,” added Entner.

On the other hand, “I do think that if you own a watch and suspect you haveheart issues or just want info,” said Raskin, “this is a fabulous product.”