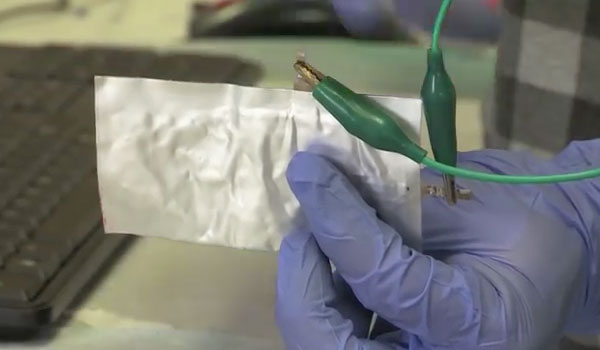 Stanford University researchers on Tuesday revealed they had stumbled onto a breakthrough that could lead to the adoption of fast-charging, long-lasting batteries in the near future.

“An ultra-fast rechargeable aluminum-ion battery,” which details the team’s findings, was published in the April 6 edition of Nature.

The turning point occurred when the researchers were trying out materials to serve as a cathode, and they began experimenting with graphite.

Using one of the aluminum-ion prototypes, they were able to charge a battery comparable to one used in a smartphone, in roughly 1 minute. That’s about 60 times faster than a lithium-ion battery would charge.

Stanford’s aluminum-ion concept promises unprecedented durability, standing up to about 7,500 charge-discharge cycles before losing any of its capacity. To put that into perspective: Lithium-ion batteries endure about 1,000 cycles before declining in capacity, and previous aluminum-ion prototypes could withstand only about 100.

Other benefits of the aluminum-ion prototype include safety and flexibility.

The researchers could safely bore into an aluminum-ion battery without causing a fire, though that wouldn’t be possible with lithium-ion cells. Aluminum-ion batteries are pliable, to a degree, which could have huge implications for just about any device that runs on battery power.

The use cases for aluminum-ion batteries range from making removal of cellphone batteries completely a thing of the past, to making solar devices even more energy efficient.

Before the industry can move to refueling smartphones and smartwatches in a minute flat, however, proof that the Stanford aluminum-ion battery can scale up, suggested Eric Lind, North American sales manager of OEM and PPS for VARTA Microbattery.

“In these types of research programs, much of the research is done on very small cell sizes,” he told TechNewsWorld. “The results are then extrapolated to a commercial cell. However, generally the scale-up does not typically correlate linearly with what is found in the lab.”

Though metal corrosion could hold back the advancement of aluminum-ion batteries, energy density appears to be the biggest hurdle, according to Lind.

“Where these aluminum ion batteries seem to have a shortfall, currently, is in terms of energy density. This would have to be solved in order for it to be a real challenger to lithium-ion systems today.”

Despite the challenges, aluminum-ion batteries appear to have great potential for applications in consumer electronics.

The use cases of aluminum-ion batteries in the mobile space are myriad, because mobility is almost always challenged by power issues, observed Kevin Krewell, principal analyst at Tirias Research. Battery limitations have been hindering the adoption of smartwatches, for example, but a 1-minute-recharge time could change that overnight.

“There is a woefully short amount of cycles to go through with lithium-ion batteries,” Krewell told TechNewsWorld. “To extend that would allow phones to last longer. You wouldn’t have to worry about having to have your phone repaired if the battery wears out and you have an iPhone or the latest Samsung handset.”

Beyond mobile devices, aluminum-ion cells could spur the evolution of the Internet of Things, he suggested.

Aluminium-ion batteries could be beneficial in connected devices that wake up briefly just to pass along information, hybrid cars that want to better harness the electricity they generate, and sensors whose ideal positioning is hard to reach — or at the top of a tower.

Research like this takes a great deal of time, but it’s exciting to see it advancing, said Krewell.

“It’s great that universities like Stanford are putting effort and time into this research,” he remarked. “It’s not as sexy as new websites and faster chips and other new tech, but it’s extremely critical to the future of our mobile devices.”