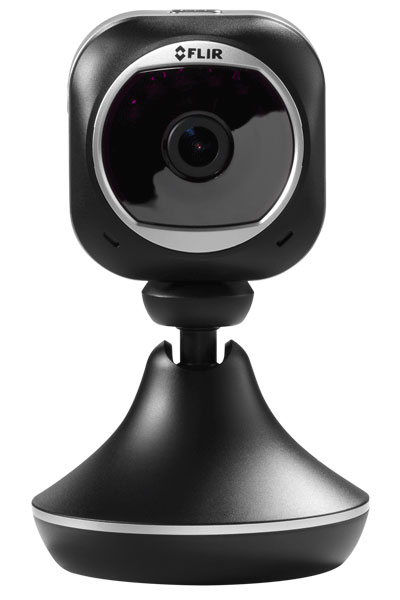 Flir Systems, known primarily for its commercial sensor products, on Tuesday made a foray into the consumer market with a new video camera that can be used for home monitoring, sports, and even as a dash cam.

The new Flir FX video camera, which supports WiFi, is a compact unit capable of capturing HD, as well as integrating with cloud-based analytics and a set of application-oriented mounts.

The mounts allow the camera to be used for a variety of purposes, such as monitoring the inside or outside of a home, capturing sports action from the point of view of a participant, or recording a trip from the dash of an automobile.

Live video can be streamed to a smartphone or tablet from the camera with or without an Internet connection. In addition, video can be recorded to a microSD card in the unit. Users can communicate via two-way audio and quickly review events recorded based on motion algorithms with RapidRecap, software made by Flir for swift viewing of hours of video.

“The product is primarily targeted at the in-home use case, but it’s quite versatile and can be used in other situations and places,” Flir Chief Marketing Officer Travis Merrill told TechNewsWorld.

Unlike many home-monitoring cameras, the FX has a rechargeable battery with an estimated run time of two-hours. What’s more, the application-specific mounts contain a battery, providing the camera with another two hours of power.

“We learned through consumer research that flexibility is somewhat important,” Merrill said. “The fact that we have a battery on the camera, and you can position it outside the range of a plug-in power source appeals to some consumers.”

Many consumers don’t want their home-monitoring cameras on all the time, he explained. They may use them while they’re at work or on vacation or to communicate with family when they’re away from home.

“There are scenarios where they just don’t want them on, but there’s nothing else they can do with them because they have to be plugged into a power source,” Merrill said.

“We tried to address that by putting batteries in the head of the camera and the mounts to allow people to take the camera with them and use it in different ways,” he said.

The indoor mount allows the camera to be placed on a counter or attached to a wall where it can record all activity in a room with the unit’s 160-degree viewing area. The stand also contains night vision infrared lights for capturing video within a 33-foot range in dark environments. The camera and indoor mount sell for US$199.

The $59.99 sports case allows the camera to be placed on a body or helmet, and it provides protection in up to 65 feet of water.

The dash mount has a built-in accelerometer to sense motion and set off a 30-minute recording loop. When the sensor detects a shock, it automatically stores a “before and after” recording. The dash mount sells for $49.99.

When the FX is placed in a mount, its app automatically makes configuration and functionality changes to accommodate its placement.

Flir’s approach to the consumer specialty video camera market appears to be a savvy one.

“Any company coming into this space needs to have a very different type of value proposition from market leader GoPro,” noted IDC Research Director Chris Chute.

“Flir is interesting … . This ability to have the mounts dictate what the camera does without a user having to get involved is a smart move, because there is no heavy lifting in terms of using the camera,” he told TechNewsWorld.

Moreover, Flir may be carving a unique niche for itself in the market.

“There isn’t much out there that tries to serve as many roles as this product,” said Ross Rubin, the principal analyst at Reticle Research.

“Action cams aren’t used much of the time, so this lets it serve a purpose when you’re not out skateboarding or surfing or capturing the footage that’s generally identified with those kinds of cameras,” he told TechNewsWorld.

“However, if you were leaving on a trip to capture those kinds of exploits,” Rubin said, “that would seem to be exactly the time you would want a security camera at home.”