Force.com Is One to Be Reckoned With

At its annual Dreamforce event, Salesforce.com and several of its partners (Facebook, Google and Amazon) made announcements intended to encourage more businesses to pursue Web-as-a-platform using their Force.com business process platform. Taking away significant amounts of hype, there were three themes for the conference: Cloud computing that takes SaaS (Sofware as a Service)-based application delivery to the business process platform level; customer success announcements and ecosystem partnerships designed to provide industry; and business-process applications as part of the Force.com platform strategy.

Growth on the platform has been impressive: Dell has launched a global Channel Management System in six months to 30,000 channel partners and has registered US$200 million of new deals using the Force.com platform. Other customers — Citibank for IT governance; Morgan Stanley for recruiting and training, and Ashland for samples management — detailed similar successes.

Force.com Has a Direct Impact on CIO Projects for 2009

But what do these grand announcements mean to the CIO of a company who in 2008 and 2009 is struggling to tackle more projects with fewer resources and less budget? The answer: a profound effect on the economics of specific near-term projects that a CIO may undertake.

Applications development and maintenance budgets for CIOs at both large and small/medium enterprises fall in the range of 50 to 70 percent; responsibility shifts to Force.com for maintenance of Service Level Agreements (SLAs) and expenses related to middleware, applications, tools, user interface, analytics and database.

Those companies are pursuing and considering SaaS and cloud computing initiatives to deliver new applications faster, maximize the ROI and minimize the escalating costs of their IT infrastructures, as shown in Figure 1. 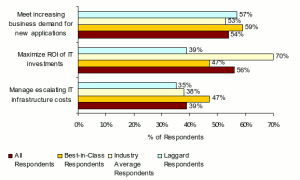 No matter which performance group CIOs at these companies fell into, reasons for looking at SaaS initiatives were relatively consistent:

Force.com: On the Radar for the Medium-Term

As important as the short-term economic impacts are, to the extent that Salesforce.com is successful with its Force.com platform, Salesforce.com will continue to gain market relevance against enterprise vendors such as Microsoft, SAP and Oracle striving to develop true multi-tenant, on-demand, profitable delivery models.

From the conference, clearly Salesforce.com executives have Microsoft, SAP and Oracle in their sights as they do battle in 2009. Each of these vendors, however, has varying degrees of experience and success in developing profitable revenue streams from multi-tenant on-demand business. The other problem: All three have established decades-old on-premise licensing models producing billions of dollars in revenue and employing dozens of thousands of people:

For the CIO looking at strategic projects three to five years out, he or she will need to monitor the successes of the Force.com platform and the actions of competitors such as Microsoft, SAP and Oracle to determine strategic relevance over time.

Salesforce.com is developing a rich ecosystem of ISV (independent software vendor) partners able to provide industry- and business-process extensions usable in the Force.com environment: There are now 110,000 registered Force.com developers, up from 50,000 developed a year ago. Key to growth will hinge on their ability to enable these business partners. Two partner stories stand out:

Strip away the showmanship, and for the CIO at a large enterprise or small/medium business, keep Salesforce.com and the Force.com platform on your radar screen. Watch for success in platform partner enablement and the unfolding story of market relevance as Salesforce.com does battle against Microsoft, SAP and Oracle. It should provide quite a lot of drama.

David Boulanger is research director of the customer management group at the Aberdeen Group.
Get Permission to License or Reproduce this Article

Transit CRM: Creative Ways to Get Citizens on Board

Enterprise Feedback Management: Getting Inside Your Customers’ Heads

Customer Experience Management: Rx for the Top and Bottom Lines