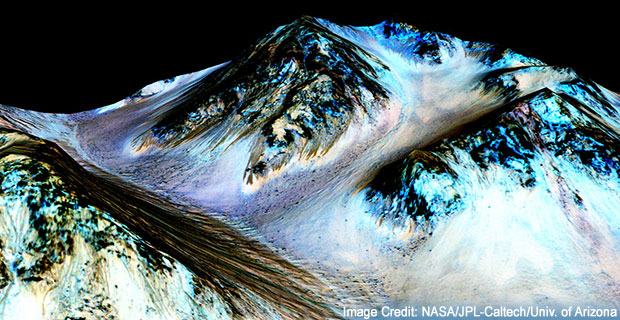 Called “recurring slope lineae,” the streaks are approximately the length of a football field, according to NASA’sJet Propulsion Laboratory. They are believed to have been formed by the seasonal flow of water.

Lujendra Ojha of the Georgia Institute of Technology noticed these lineae as an undergraduate student at the University of Arizona in 2010. He and seven coauthors wrote a report on the research, which was published Monday in the journal Nature Geoscience.

The findings strongly support the team’s hypothesis that recurring slope lineae form as a result of current water activity on Mars, he said.

“We know there’s water in [Mars’] polar caps — that’s irrefutable — so the picture they paint is plausible,” he told TechNewsWorld.

Figuring Out the Proof

Ojha noticed back in 2010 that the lineae appeared during Mars’ warm seasons, when temperatures were above -23 degrees Celsius, and seemed to indicate the downhill flow of some liquid. They would fade in cooler seasons.

The researchers found the hydrated salts only when the seasonal features were widest, Ojha said, suggesting that either the dark streaks themselves, or a process that formed them, were the source of the hydration.

Where’s the Water Coming From?

Mars’ atmosphere consists of about 95.3 percent carbon dioxide and 2.7 percent nitrogen. Water is a combination of hydrogen and oxygen, which raises the question of where the water could come from.

Perchlorate salts are powerful oxidizing agents, which would explain how the oxygen in the carbon dioxide might be freed to combine with hydrogen — but where’s the hydrogen?

Hydrogen “exists as a trace element, but it’s highly reactive and would likely bond to any free oxygen to form water,” said Mike Jude, a research manager atFrost & Sullivan.

“Even Earth has a hard time retaining free hydrogen,” he told TechNewsWorld.

The major source of water in the inner solar system is comets, and Mars could have retained “a significant fraction” of that water, UCLA’s Newman speculated.

Daily temperature changes are severe on Mars and could cause liquids to freeze and crack the surface, creating more places for liquid to collect, as happens in alpine terrains on Earth, he said.

The Meaning of Water

The existence of water posits life on Mars, although other requirements would have to be fulfilled.

Still, a non-oxygen-breathing life form could well exist on Mars.

Further, just what passes for water on Mars has yet to be determined.

While explanations for the lineae revolve around water, “the nature of the water involved is subject to some debate,” Frost’s Jude said.

Whether that will impact any native life forms on Mars, and how, remains to be seen.