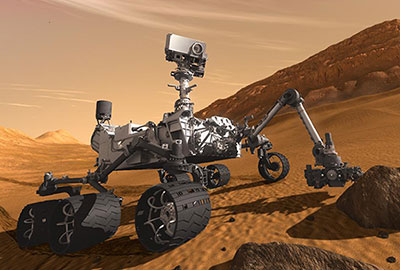 Representing the largest and most advanced rover ever sent to the Red Planet, the automobile-sized Curiosity vehicle will look for evidence of water, carbon and other key elements in the Martian soil and atmosphere in the hopes of determining whether Mars has ever had the potential to support life.

A launch window of one hour and 43 minutes opens at 10:02 a.m. EST on Saturday. Following the roughly 127 million mile trip, the rover is expected to land in Mars’ Gale Crater in early August 2012 and remain there for 98 weeks — one Martian year.

Plans call for the one-ton Curiosity rover to land near the base of a layered, three-mile-high mountain inside Gale Crater. There, it will use a Sample Analysis at Mars (SAM) instrument suite and other tools to investigate whether environmental conditions ever have been favorable for development of microbial life.

“Gale gives us a superb opportunity to test multiple potentially habitable environments and the context to understand a very long record of early environmental evolution of the planet,” said John Grotzinger, project scientist for the Mars Science Laboratory at the California Institute of Technology in Pasadena.

“The portion of the crater where Curiosity will land has an alluvial fan likely formed by water-carried sediments,” Grotzinger added. “Layers at the base of the mountain contain clays and sulfates, both known to form in water.”

Curiosity is twice as long and five times as heavy as Spirit and Opportunity, two previous rovers. It will carry a set of 10 scientific instruments weighing 15 times as much as the science payloads those predecessors carried.

A 7-foot-tall mast will allow cameras and a laser-firing instrument to study targets from a distance, while instruments on a 7-foot-long arm will study targets up close.

Inside the rover, meanwhile, an array of analytical instruments will determine the composition of rock and soil samples acquired with the arm’s powdering drill and scoop.

“My understanding is that this will represent a huge step forward in terms of the capabilities of this robotic rover,” Mario Livio, senior astrophysicist with the Space Telescope Science Institute, told TechNewsWorld.

“Ultimately, most missions to Mars are designed to give us a much better understanding of the terrain and its geology on one hand, and more importantly, to assess whether Mars at any point in its history has harbored life,” Livio explained.

“With the much sharper images and spectra and the greatly improved chemistry investigations that this rover will produce, there is no doubt that we may be able to finally answer these questions,” Livio concluded.

Landing Curiosity on Mars could be a particularly tricky challenge, however. Because Curiosity is too heavy to use a traditional air-bag cushioned touchdown, the mission will instead use a new landing method, with a rocket-powered descent stage lowering the rover on a tether like a kind of sky-crane.

The mission’s landing target is also smaller than that of any other Mars mission, measuring just 12.4 miles by 15.5 miles inside the crater. Brand-new precision landing methods will be required to hit that target successfully.

“The real issue is going to be how this thing lands,” Paul Czysz, a professor emeritus of aerospace engineering with St. Louis University, told TechNewsWorld.

‘You’re Lucky to Hit Within 20 Miles’

Besides the vehicle’s size and landing technique for this mission, another complicating factor is that there is no beacon or reference spot on Mars, making it difficult to know where the rover is heading for as it lands, Czysz pointed out.

“You really don’t know where you are when you fly over Mars,” he explained. “You have no idea what the position of the planet is with respect to your orbit. The best you can hope for is some precession in your orbit so that you can eventually see your landing site.”

Without a way point on the surface, “you’re probably lucky to hit within 20 miles,” Czysz said. “If everything goes right, you could probably get within five miles.”

Once landed, Curiosity may have to drive to its ultimate destination, he added.

“Hopefully it will have enough solar cells for better speeds than Spirit, which covered only a few feet per minute,” Czysz recalled. “It took it a month to go a few miles.”