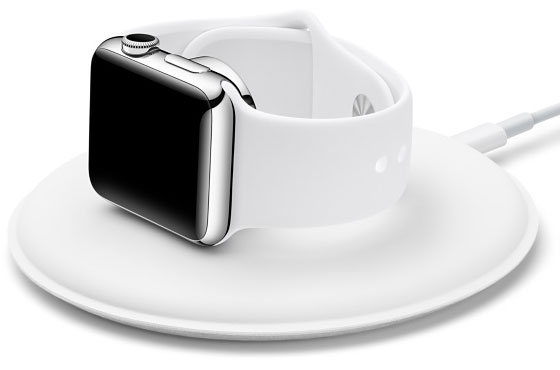 Hello, and welcome to a fresh-out-the-oven edition of Gadget Dreams and Nightmares. the column that determines whether the latest gadget announcements are ready to serve or have to bake a little longer.

Cooling on the window this week are an official Apple Watch dock, a mesh router system, a virtual reality smartphone case, and a wristband that can shoot fireballs.

As ever, note well that these are not reviews, merely glib observations drawn from reading and watching videos about each item. The numeric ratings exist only to represent my interest in trying out each product, as well as provide me with an opportunity for another gag.

Sitting on the Dock

No longer leaving it up to third-party companies to create charging docks for its Apple Watch, Apple has released its own official dock (pictured above).

It allows Watch owners to rest the smartwatch in nightstand mode — a feature introduced in the latest version of the operating system that essentially turns the Watch into a bedside clock — without tangling it up with the standard magnetic charger.

The dock is a flat puck, almost like a circle bed on which to rest your precious Watch as you sleep. Owners may find it especially useful if they have a few spare Lightning cables, as it uses that format instead of the Apple Watch cable.

This is really all about the aesthetic, a way to ensure your Watch looks as pristine as possible when you reach out to shut off its alarm first thing in the morning while hoping you don’t accidentally smash it. This doesn’t seem like something that would justify shelling out US$79, even if I had a Watch. I’d be quite fine with just hooking up a regular charger cable.

Rating: 2 out of 5 All About the Looks

AVG, a company perhaps best known for its antivirus software, is delving into the hardware market with a router.

You can daisy chain multiple Chime mesh routers throughout your home (or office or wherever else) to send a strong WiFi signal throughout the space. It’s not the first router setup to try this trick, but it may be the first to provide a security setup built into the home network rather than individual devices.

The built-in privacy options include Tor — software used to establish an anonymous connection to the Internet — and virtual private networks, which you can use to hide your IP address and mask your browsing activity from your Internet service provider. AVG also includes the free version of its antivirus software.

There are some privacy concerns on that front, however, as AVG recently updated its privacy policy to state it can collect browsing, search and metadata history from users of the free version of the antivirus software — so it may not prove such a secure network after all.

I’m tired of having a weak WiFi signal in some areas of my apartment. I can’t watch a show from Netflix while at the cooker, nor can I stream music in the bathroom. So, yes, I’m interested in Chime. I’m just not so sure I want AVG selling third parties information about my predilection for bubblegum pop.

Rating: 3 out of 5 Safety Nets

There’s a line in the promotional video for Ellusionist’sPyro Mini that reads, “Shoot fire from anywhere.” It’s funny how quickly four words can sell me on such an absurdly dangerous device: a fireball launcher strapped to one’s wrist.

I included the original Pyro in this column around a year ago, and now we have its successor, the Pyro Mini. This version is half the size, so it’s more inconspicuous, and relies on a built-in battery pack instead of disposable batteries.

More excitingly for pyromaniacs, the Pyro Mini can shoot the flash-paper fireballs up to 30 feet away using a remote — and thanks to the dual barrels, it can fire two fireballs at once.

Pyro Mini is designed for illusionists’ use, but I can think of a great many circumstances in which I’d find this useful. Mostly they’re situations in which I imagine myself as one of my favorite X-Men.

Rating: 4 out of 5 Great Balls of Fire

Of all the add-ons that promise to turn smartphones into virtual-reality devices, none seems as convenient as Figment.

With a flick of the wrist (and the opening of an app), this iPhone case converts the smartphone into a virtual reality viewer. There’s also the option to use the case and phone to explore augmented reality, which opens up some intriguing possibilities for how we experience the world around us.

It’s smart for a smartphone case maker to delve into the virtual reality movement. Figment is an extremely smart design, which is even more evident when you see that the part of the case that extends for virtual reality viewing also can prop up the phone as a stand. At the very least, it’s a touch more portable than Google’s Cardboard VR viewer.

Rating: 4 out of 5 Another Worlds