Gadget Ogling: A Speaker-Stuffed Tablet Case, a Soothing Wearable, and Earbuds for the Real World 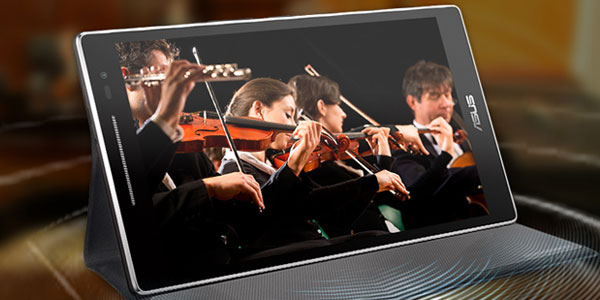 Salutations, and welcome to another installment of Gadget Dreams and Nightmares, the column that leaps over buildings in a single bound in search of the best gadgets culled from all the latest announcements.

This week, we’ll take a look at a tablet case with audio flair, an updated GoPro, a mood-altering wearable, and earbuds for the physical world.

Note well, fair traveler, these are not reviews. The ratings relate only to how interested I am in trying each item with my own hands. Or ears, as the case may be.

ASUS is on a crusade to end the scourge of tablets with terrible sound. Its new ZenPad 8.0 has an interchangeable cover design that allows users several functional options. One is the Audio Cover (pictured above), which bumps up sound quality by tucking a 5.1 surround-sound system inside.

With six speakers, including a subwoofer, the Audio Cover promises to significantly improve the tablet experience of watching video and listening to music.

However, unless your tablet constitutes your home entertainment system, I can’t quite understand the point. Sure, it might come in handy if you’re spending some time with friends in the park and streaming from Spotify, but I wouldn’t want to use this to watch Jurassic Park at any type of volume on the train.

Still, it’s a nice idea, and it’s good to see some genuine innovation in tablet covers beyond protection and external charging.

GoPro’s portable cameras have helped action seekers share some terrific footage with the rest of the world. Under the threat of drones capturing impressive film of their own and usurping the action footage leader, GoPro’s Hero+ LCD adds an LCD touchscreen to the product line.

I’m increasingly enamored with drone cameras and the flexibility they afford, especially when you can have a drone automatically track your movements. However, there’s something about fixing a camera to something physical and close up — like a helmet or piece of sporting equipment — that seems to result in a more visceral sense of the action.

The screen here affords owners the option to instantly review footage without having to switch to a smartphone app. I also appreciate built-in WiFi and Bluetooth, and the ability to trim footage directly on the camera to make clips stronger before quickly sharing them using the app.

I admire GoPro,and this latest model in its line of cameras. However, I don’t think it’d be best suited for my lifestyle. I can’t imagine there’s a massive YouTube audience for my leisurely strolls through the local park.

Rating: 3 out of 5 GoSlow Heroes

Science finally has found an answer to one of the great mysteries of our time: Will we ever see a sillier-looking face wearable than Google Glass? The answer is yes, and its almost-as-silly homonym name is “Thync.”

This is a device that works on a neurological level, sending signals directly to your brain to change your mood. Of course, you use an app to control the mood setting.

On the surface, it’s a great idea. I think most of us could use a surefire way to relax.

But it looks utterly ridiculous. I wouldn’t be caught dead wearing this in public, and my fashion sense is as almost as dire as it gets.

Plus, I’m a fairly laid-back gent, in any case.

Rating 1 out of 5 Rounded Corners

Here Active Listening is a set of earbuds that doesn’t let you stream music from your phone. Instead, it’s supposed to variably improve, amplify and tune out the sounds of the world around you, in a bid to improve audio quality in almost every facet of your life.

Through (what else?) a smartphone app, you can select not only which sounds you hear in the physical world, but how you hear them. Need to drown out annoying office chatter, but zero in on the conversation at your meeting? It seems as though Here can do just that.

There’s a range of equalizer options to adjust how you hear live music, for instance, and a number of presets to cut down on certain sounds. You can also slap on effects like reverb, bass boost and echo.

The crowdfunding campaign already has reached it’s goal, though I do hope one of the stretch goals is to add headphone capability. It’d bother me to have to switch out Here for my regular earbuds when I want to listen to music or a podcast from my phone.

Anything that can help tune out hideous screaming and yelping at concerts and keep my focus on the music itself, or shut out a fussing infant on public transport, is something I can get behind. I am tuning into these.

Rating: 4 out of 5 Moments of Serenity in Busy Streets