Gadget Ogling: An Amped-Up Smartphone, a Giant USB Charger and a Gun Detector

Greetings, and welcome to Gadget Dreams and Nightmares, where we award trophies for the best and worst of this week’s gadget hunt.

In our crosshairs this week are a smartphone from an audio equipment maker, an enormous USB power brick, a smartphone case for moviemakers, and a gun detection system.

As ever, these are not reviews, and the ratings relate only to how much I’d like to try out the items with my own hands.

Marshall, best known for its guitar amplifiers and headphones, is moving into the smartphone market.

Its first device, London, has dual front-facing speakers and a pair of audio outputs, making it easy to share what you’re listening to with a friend who’s also wearing headphones, assuming you’re in a setting where you don’t have the option of playing the audio over speakers.

There’s a dedicated button for access to various music services, and there’s a scroll wheel with that unmistakable Marshall gold sheen to control the volume. Apple’s iPhones have earpods, but Marshall’s London comes bundled with a pair of Mode earphones (see above).

I’ve been an iPhone owner for seven years now. If there’s one compliment I’ll pay the London, it’s that at first glance, it’s one of the few Android smartphones in all that time that’s made me consider leaping the great divide. Rock on.

Rating: 5 out of 5 Distortion Pedals

A new so-called “super charger” has up to 60 USB ports for powering everything in your home that doesn’t run off the power grid. That’s a little over the top.

Allputer’s 60-Port Super USB Charge Station could be useful in an office where socket space is at a premium. I know all too well the feeling of struggling through a workday with nary a socket to be seen, and security restrictions on the use of USB ports while my battery meter dwindles. 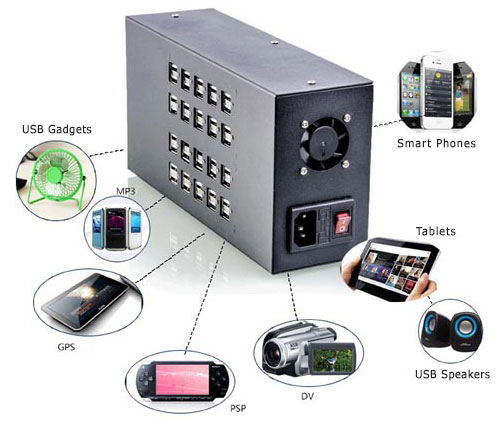 I confess I am perplexed as to why anyone might ever buy this for their home, though. Unless you’re gadget-crazy and use dozens of portable gizmos every day, there’s no reason you should need to charge 60 different machines at once.

Knowing me, I’d fill all the ports with novelty USB storage drives. To see a wall of ridiculous tchotchkes and always know where I can find a USB drive when needed is a life goal I never knew I had until now.

Rating: 3 out of 5 Glowing Storage Drives

I’m surprised that there haven’t been more than a scant few movies entirely shot on a smartphone as yet. The cameras on modern devices are good enough to record some outstanding footage.

Perhaps that’ll change if the Lumenati CS1 takes off. It’s an iPhone case that, when paired with an app, allows you to look through a viewfinder and record what you see by holding down a physical trigger.

It’s designed to evoke memories of the simplicity of a Super 8, but since we’re 50 years on from the debut of Kodak’s famed camera, there are far more bells and whistles here. You can swap out lenses, and the CS 1 gives the option to add filters, handles, microphones and lights.

The case also can attach to a tripod, so it is aimed at people who want to get the most out of their iPhone for recording video.

I wanted to dislike the CS 1 at immediate glance, but as I learned more, it won me over. My favorite touch is loading one’s iPhone into the case as one would a film cartridge into their Super 8 camera.

It’s a charming idea, and if it helps unearth future Spielbergs, Scorceses and Kubricks, then all credit to its creators.

Rating: 4 out of 5 High-Definition Home Movies

GunDetect is a camera system that uses computer vision to detect firearms and send you an alert. The creators suggest that it could be used to stop your own gun from being used without authorization, or to know when someone else is at your home with a firearm.

There are two versions of GunDetect available through its crowdfunding campaign. The less-expensive model is a cloud-based version that requires a subscription to process images. If it works as promised, it will encrypt the images it sees, send them to the cloud for processing, and send you an alert if it sees a firearm. The self-contained version takes care of the image processing with an on-board system.

The makers say GunDetect has a 90 percent accuracy record, but when you’re trusting it with your safety to a certain degree, one would hope the degree of accuracy would be higher. If a home invader packed a gun in a backpack or was adept at concealing it, it seems unlikely GunDetect would spot the weapon. Also, there’s no night vision capability, so good luck tracking the presence of firearms at night.

It could add to a broader home security setup. Though it’s a good idea, I can’t see how it would prove effective enough as a standalone security system.

Rating: 3 out of 5 Rooted-Out Rifles