Gadget Ogling: Gaming Revivals, Clever Cameras, and Smartphones for All 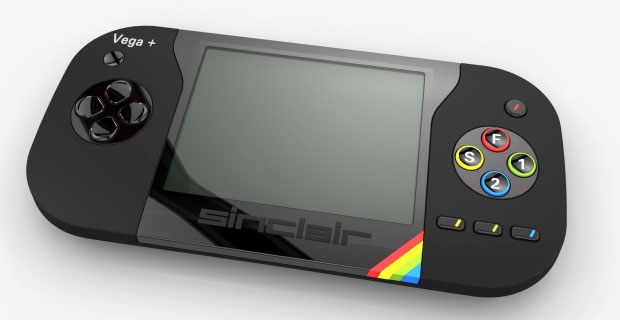 Hello, friends, and welcome to another edition of Gadget Dreams and Nightmares, your guide through the mists of the gadget announcement universe to the clearing where the best stand out a little more clearly.

On the other side of the haze this week are a handheld retro gaming system, a home monitoring camera with style, a 3D printer for action figures, and what may be the least expensive smartphone yet.

As ever, these are not reviews — they’re first-look observations about each item. The ratings denote only how much I’d like to test each with my own two hands.

Sir Clive Sinclair helped popularize video games as a viable home entertainment option with the ZX Spectrum. After reviving the brand a little over a year ago with the introduction of the Vega microcontroller, which plugs into televisions, Sinclair and Retro Computers now have launched a handheld version, the Vega+.

The Vega+ design is aligned with other current handheld consoles, with a directional pad on the left and a quartet of action buttons on the right. Three secondary action buttons are positioned below them. It’s not quite the same as using a keyboard to play, but seven action buttons might make up a touch for the lack of full QWERTY flexibility.

I’ve been playing games as long as I can remember. The Spectrum was a little before my time — I was aligned more with the Commodore 64 and the Super Nintendo. So, having the opportunity to play hundreds of games I missed out on without having to resort to downloading pirated versions absolutely interests me.

It can connect to a TV for big-screen gaming, and it has 1,000 licensed games preloaded, with an SD card slot for gamers to add their own favorites.

That it’s a handheld system is even better. What better to do on the beach this summer than play 30-year-old games?

Rating: 5 out of 5 Retro Returns

Sense is a home-monitoring camera that can take complete charge of the connected devices in your home. It can recognize multiple faces and carry out custom actions for each person, and it can alert you when it thinks a stranger is in your home.

It’s not as noticeable as most other home cameras, meaning intruders will have no idea you’re watching them. It even has night vision so you can see what’s happening in the dark.

Sense looks elegant, and it’s intelligent about how it controls your devices. It not only will adjust the lighting, thermostat, television and music playing, but also detect when you’ve dropped something, and send out your robot vacuum cleaner to take care of the mess.

It includes voice recognition, so you might ask it to change the current playlist. Sense also has an open source platform, so you might like to create an app that carries out completely custom actions, such as switching on the lights, television, and radiators when it recognizes you within a certain time frame — e.g., when you’re returning home. You may not wish for all that when you’ve just awakened.

We’re getting closer to finding a way of unifying all the disparate operating systems and protocols of connected devices in the home. Sense looks like a strong option for controlling our products with a single device that offers both simplicity and power.

A 3D printer is taking the idea of Mattel’s ThingMaker — which lets children make their own rubbery toys in an oven — to a new level. Also called “ThingMaker,” this printer lets kids young and old create their very own action figures and other toys.

Would-be designers can use an app to create the figures of their dreams, with a ball-and-socket system making it easy to swap components in and out. Colors are customizable as well, and Mattel plans to make available components related to its major brands such as Barbie and Hot Wheels.