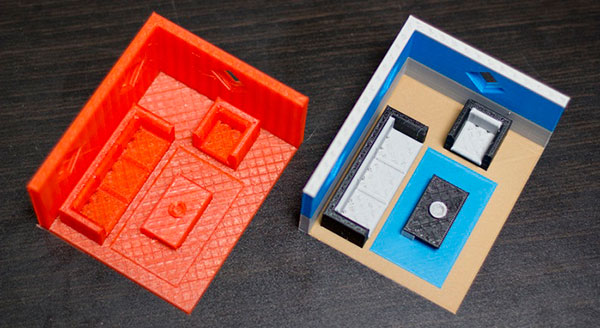 Roll up, roll up for another installment of Gadget Dreams and Nightmares, the column that guides you through the hall of mirrors of terrible gadget announcements to the fun house of vastly more glorious joys.

In our fairground this week are a 3D printer expansion pack, a ring box with a camera, a card-control system for smartphones, and a smartphone with added strength.

As ever, these are not reviews, and the ratings reflect only my interest in using each item, even if it is only to throw it at any clowns that may lurk nearby.

3D printing is fascinating. It still seems wild to me that you can download schematics for anything and have a plastic version of a physical object in your home a short while later. However, not many printers can switch up the color or the types of filaments you use in your creation.

The Pallette could change that, with a peripheral to pump in more vibrant hues and brighten up that mono-colored trinket you’re ready to print (see comparison above).

What’s especially interesting is the possibility of adding different elements to the object, like some carbon fiber or wood.

It seems likely to expand the possibilities of 3D printing wildly, and opens up many doors for creators who want to build something that’s more than a plastic item in only one color but can’t afford higher-end printers.

It’s a great idea, and the crowdfunding campaign is already a success, so we’re likely to see this on the market.

It’s still not as cool as printing pancakes, mind you.

Rating: 5 out of 5 Plastic Rainbows

Much of the time, I wish people would keep their cameras and phones away during special, rare moments. “Don’t stare at it through a screen,” I might say, “Absorb the moment.” But there are those once-in-a-lifetime occasions that may be truly worth capturing. Like, say, a proposal.

So here’s XOcamm, a ring box with a camera inside to grab that moment when someone asks that all-important question. The design’s a little different from a regular ring box too, with a dome instead of a cube.

I can’t tell if I love this or hate it. I’m not afraid to admit I’m a softie, and certain proposal videos tug at my tender, rose-tinted heartstrings. That said, I think there’s something special about a proposal that should stay between the lucky couple. They can be the ones to tell the story of the moment to their friends, family and children. Not a video.

At the time of writing, the XOcamm crowdfunding campaign had yet to pick up a single pledge. A shame, actually, as I’d occasionally like to indulge in the schadenfreude of watching some poor sap create an elaborate proposal only to meet a blank stare from his would-be betrothed.

Accessibility is an important issue in consumer technology. With advancements occurring so rapidly, there’s always the danger that someone eager to use the latest smartphone is somehow left behind.

Taking a stab at a solution is NavCard, a range of single-purpose NFC cards that carry out certain functions when tapped against an Android device. These run the gamut from adjusting the volume and opening Gmail to returning to the home screen.

It’s a nice idea in theory, but there are often much easier ways to carry out tasks — a button press or two, or voice commands — than to fiddle with a bunch of different cards until you find the one you need.

Rating: 3 out of 5 Functions on Tap

If I had a nickel for every time I’ve dropped my iPhone, I’d have enough in my piggy bank to buy a new one. It still works fine (except for a busted volume down button and a temperamental power/sleep button), but it has around a thousand scratches on its formerly sleek visage.

A sturdier smartphone is what this planet needs, and good news! The Turing Phone, from Turing Robotic Industries, offers not only a sturdy build to keep it scratch-free — it’s made with an alloy of zirconium, copper, aluminum, nickel and silver — but also end-to-end encryption for all communication.

It detects and verifies other Turing Phones seemingly to keep communication completely safe from prying eyes. It runs Android 5.0 as standard and has a 5.5-inch screen, and overall seems not too shabby on the specs front.

We’ve seen smartphones for the security-minded before, with the likes of the Blackphone, but to have a phone that has physical strength as well as sturdy security makes this a solid option for clumsy oiks like me.

Rating: 4 out of 5 Cracked Screens