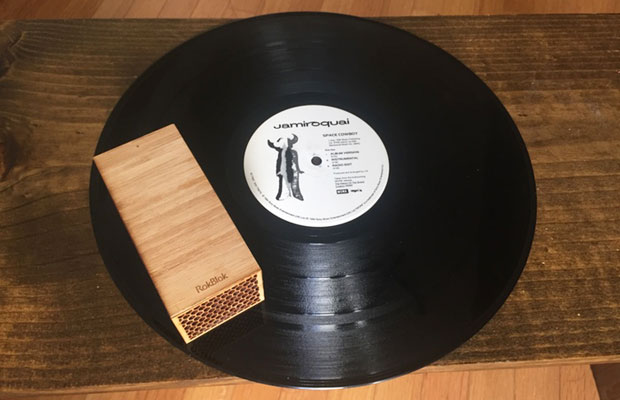 Welcome to Gadget Dreams and Nightmares, the column that’s stopped shaking its head in disbelief that it’s actually December long enough to cast an analytical gaze over the latest gadget announcements.

On the last page of the calendar are a portable record player, a device to craft designs into lawns, and a bed for your phone. Yes, you read that last part correctly.

As ever, these are not reviews, partly because I’m not so sure a delivery truck can make it through the snow we’re already getting in my part of the world. The ratings relate only to how much I’d like to try each item.

RokBlok is a portable record player without a turntable. It’s a block that dashes around the top of your records, and uses both its needle and built-in speaker to soundtrack your day.

All you need to operate it are your records and a flat surface. If you’d like higher quality audio, you can connect it to your Bluetooth speaker or headphones.

It’s designed with protecting your records in mind, as it has rubber wheels and the center of gravity isn’t on the needle itself. That should help prevent RokBlok from widening the grooves and help you enjoy your records for years to come. Still, I’d be reluctant to trust it completely with the rarer, more expensive records in my collection.

RokBlok is expected to retail at US$99, though its crowdfunding backers can get one for $59 as a campaign reward. That seems a fair price for something you’re unlikely to use as your main record player, especially if you’re a conscientious audiophile.

That you’d need to cart along a Bluetooth speaker to make it more useful — unless you’re wearing headphones — means it’s a little less portable than I’d like.

I can’t imagine that I’d use RokBlok outside of my home in any case, but it seems like it’d be a fun little party trick. Just make sure to ask your host’s permission before you run RokBlok over the top of their prized first-run Japanese copy of Thriller.

Rating: 3 out of 5 Into the Grooves

What better way to add a little temporary flair to the facade of your home and grounds than with a design of your choosing on your lawn?

Grassffiti, which is clearly not a name its creators came up with while inebriated (try saying it out loud after a few tipples), is the brainchild of University of Tokyo researchers. It’s a lawnmower that brushes blades of grass in different directions to create a visible image. It’s a similar technique to the one used on sports fields to give a striped effect to the grass, but it’s a little more refined and detailed.

The effect is neat — temporary artwork that washes away as soon as you roll the grass back into place. The demo video for Grassffiti doesn’t make it seem like the device leaves the clearest or most detailed images, so I imagine it would leave a stronger impact when creating larger-scale images, which are created by breaking them down into smaller sections.

Grassffiti is not available to the public, which is a shame, as it could provide some additional color to homes everywhere without having to annoy landlords or neighbors with drastic landscaping changes.

Rating: 4 out of 5 Turf Techniques

I probably should give more care to my phone than I do. I’ve no idea how the screen’s still intact, because I’ve dropped it at least once a week in the year I’ve owned it. The least I can do is make sure my gateway to the world gets a good night’s rest, especially since it’s the first thing I reach for in the morning.

To that end, I am ever-so-slightly considering bringing the Phone Bed into my home. It’s a little silly, all things considered, but I wonder if making sure our phones are well protected before putting ourselves to sleep is such a bad thing.

I can picture doing so and feeling a mite more relaxed. It’s from Arianna Huffington’s new company, Thrive Global, which promotes well-being and healthy sleep, so it’s certainly on brand.

The bed’s surface has room for multiple phones, and two spaces inside the frame for tablets. It can charge up to 10 devices at once, so it’s designed for the whole family to make use of. However, to get the full restfulness effect, you’ll need to leave the Phone Bed outside of your bedroom and turn off your devices, which might prove complicated if you use them as alarm clocks.

At the very least, the Phone Bed would prove a good way to make sure I always leave my phone in the same place when not in use. Better that than having to scramble through the sheets of my own bed trying to find it.

Rating: 3 out of 5 Sleep Tights