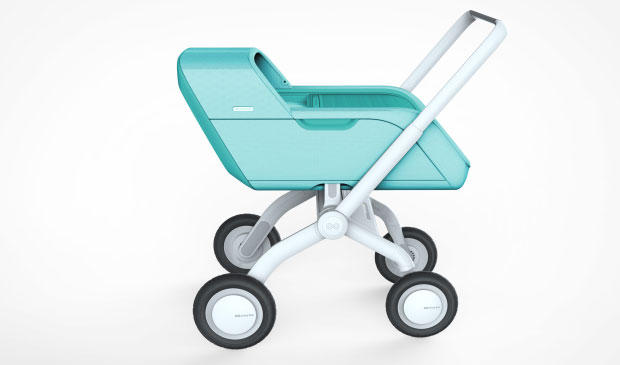 Welcome, dear readers, to another edition of Gadget Dreams and Nightmares, where we open the door to a world of possibility, with the latest gadget announcements prompting us over the threshold.

In the infinite beyond this week, we have a stroller that rolls itself, a wearable designed to correct your posture, and a short-throw projector.

The rating I assign to each item is an indication only of how much I’d like to try it. Since I haven’t yet laid my hands on any of these gizmos, these are not reviews.

Regular readers will know that I am not a parent, so you might wonder why I’m including a self-propelling stroller in this week’s cavalcade of riches. The answer is elementary: It’s a smashing idea. Granted, it’s maybe because I don’t have a child that I think as much.

Aside from pushing itself along the sidewalk, the Smartbe Intelligent Stroller can warm bottles, charge personal devices and play music.

It apparently can propel itself uphill and keep pace with you if you’re running. At US$399 for early backers of the crowdfunding campaign, it seems decent value. It will, however, retail for upwards of $2,700.

I would forgive parents for having some concern the stroller might go haywire, spinning out of control and away from their proximity.

Giving up one’s manual control over a stroller to a computer, I’m sure, would prove a difficult prospect. However, there’s a cord you can strap to your wrist so if the stroller strays too far, it instantly stops.

I’m more inclined to use it as a trolley so I don’t need to lug home a 10-pound sack of potatoes from the store, while it plays music, charges my smartphone, and keeps my coffee warm.

Rating: 3 out of 5 No More Grocery Bags

I have fairly terrible posture. As an infant, I had an operation to help me sit up straight. A certain number of years later, my natural seated position is leaning forward with shoulders hunched up to my ears. Even on public transport, I look almost at my knees to catch up with news on my smartphone. It doesn’t exactly project an air of confidence and assurance.

Alex might prove the apology note my joints have been waiting for. It’s a wearable that clips to your ears and sits on the back of your neck to monitor your posture. Look too far down or project your head too far forward, and Alex can detect your crimes of posture. It will send you a gentle vibration to remind you to adjust your position.

I love the idea and know this is something that absolutely would benefit me. The price is right ($59 for crowdfunding backers), and tracking stats over time to see how my posture has improved would be very welcome.

Trouble is, Alex isn’t the most aesthetically pleasing of wearables, and I’m wary of how it might feel around my ears while wearing spectacles all day. Also, I doubt it would improve my fashion creds among my peers.

Rating: 4 out of 5 Backs Locked

At CES 2014, Sony revealed a home short-throw projector capable of outputting 4K resolution onto a projected screen size of 147 inches. The latest version scales those numbers down somewhat, and can work on the go.

The Portable Ultra Short Throw Projector has a screen size of up to 80 inches and 1366×768 resolution. It can operate for two hours on a single charge and has HDMI and Bluetooth inputs.

Certainly, you may wish to use it as part of an unobtrusive home entertainment system, where you have both no ugly black box for a television in your lounge and an 80-inch screen a button press away.

I’d rather take it to a rooftop and set it against a wall during the summer and watch a movie al fresco — there aren’t many better ways to take in the delights of cinema than outdoors on a cool August evening.

Throwing a game onto the kitchen counter when I’m prepping a meal also is enticing — but I’d need Alex to remind me not to look down too much.

Rating: 3 out of 5 Floating Screens