There’s little doubt Microsoft has its gaming sights set primarily on the future with the approaching launch of its next generation Xbox One video game console next month, but on Wednesday the company took an old school turn and launched an updated version of the classic Windows 95 game Hover. 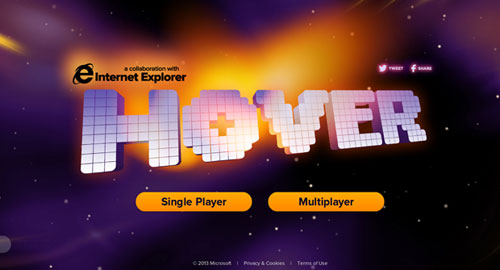 Hover originally arrived as an Easter Egg — a hidden piece of software — in Windows 95 installation CD-ROMs, where it soon developed a cult — albeit small — following. The new version, however, is available on the Web with updated 3D graphics, touch-friendly gameplay and multiplayer mode.

Hover is being introduced as an Internet Explorer 11 and WebGL title.

The update to Hover features improved and enhanced graphics by default, but a retro mode is also included for those who want to game like it’s 1995. Hover still offers the same basic gameplay, which combines the action of button cars and capture the flag into a virtual arena. Players compete by driving a hovercraft around the screen in an attempt to capture various flags and score points.

The original game is still compatible with all Windows 95-compatible operating systems, including Windows 7 and Windows 8. However, Microsoft’s new version runs within the Web browser and is compatible with any browser that supports WebGL.

“Microsoft originally released the game with Windows 95 as a way to show off the multimedia capabilities at the time,” Liz Wu, a Microsoft spokesperson, told TechNewsWorld. “Since then, it’s enjoyed a cult following, with over 10 unofficial downloads and hundreds of comments on reddit.

“Microsoft was approached by an independent developer named Dan Church who grew up playing the game and wanted to bring it back,” Wu added. “The IE team was impressed with his enthusiasm and decided to partner with Dan and Pixel Labs to bring the game to the Web, with new features like new hovercrafts and multiplayer support.”

‘Just a Reaction to Chrome’

While the release of the game may be at least in part a nod to nostalgia, Microsoft could also be looking to showcase the functionality of its IE 11 and WebGL technology.

“My first thought is to look at Chrome and what they are doing with apps in the browser,” said video game industry consultant Mark Baldwin. “This strikes me as just a reaction to Chrome.”

In that case, it’s not so much about the game technology as it is the Web development tools and how games and other applications would run within the browser.

“It isn’t really a game play, it is something that they had lying around and they believe it will show off Internet Explorer 11’s features as well as Windows 8.1 features,” suggested independent video game industry analyst Billy Pidgeon. “It is old stuff, and I don’t really think anyone is going to go, ‘woohoo!’ that Hover is back.”

In fact, “the truth is that Chrome has a lot of nifty apps and Google has introduced a lot of game apps in Chrome, so Microsoft is now following up with its own,” Pidgeon told TechNewsWorld. “To stay competitive with Google, Microsoft really needs to do a few more of these games if it wants to keep up.”

Showing Off the Modern Web

Why Microsoft opted for a game that many don’t even remember, however, is not clear. For the most part, it will appeal primarily to those who actually scoured the Windows 95 CD-ROM and took the time to look in the “Fun Stuff” folder, which also included a Weezer music video and a trailer for the movie Rob Roy.

Obscurity aside, though, it can still show off what IE11 is capable of when it comes to “its increased performance, touch capabilities and support for modern Web standards, Wu explained. “IE11 is the perfect platform for Hover.”

While it will work in any modern browser, she added, “Hover is just one of many games and experiences that the IE team has created to show off what is possible on the modern Web.”