In the run-up to the launch of “Spore,” the latest creation from “The Sims” creator Will Wright, Electronic Arts has released “Spore Creature Creator,” a sort of prequel to the full game, which is set for release in September.

“Spore” is a massively single-player online game that puts the power of biological evolution in the hands of its players.

Developed for play on PCs and Macs, the game follows a species from single cell organisms bathed in primordial ooze to sentient beings with intelligence and a social culture to intergalactic explorers in a space-faring society that interacts with alien life forms.

“Spore Creature Creator” serves as an introduction to the open-ended game Wright created. It allows gamers to mix-and-match up to 228 drag-and-drop flexible body parts; shape them, and then add a splash of color to create a singularly unique customized creature.

Once the creature is complete, then the fun really begins.

The creature maker is available as a free trial download here.

Gamers can also pick-up the full version of “Creature Creator” for US$10 as a digital download or as a boxed version from retail stores.

The trial version features roughly a quarter of the creature parts available in the paid-for version.

Dr. Frankenstein would sell his own right arm for a tool as easy to use and as fun as “Spore Creature Creator.”

The game starts with a body blob in the creature generator. You can stretch it to your liking and then add all the body parts: eyes, ears, mouths, arms, legs, feet, hands, horns and accessories.

Once the creature has all of its parts, it’s time for a little color. You can choose a preloaded color scheme and design or make it up as you go along.

The customization functionality on the game is phenomenal and is really only limited by the creator’s imagination. That is evidenced by the menagerie of nearly 600,000 oddities that have been uploaded to the “Sporepedia” by the game’s hundreds of thousands of users. 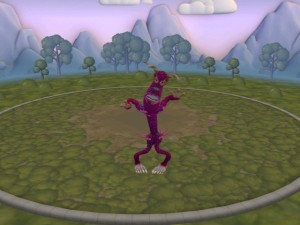 With creature in hand, you can then take your new buddy out for a “test drive.” While your new creature walks, dances or emotes on command, you can take pictures, record movies and then share them with friends and the “Spore” community. The application even allows gamers to upload videos of their creatures to YouTube.

Amateur Dr. Moreaus can put their creations to the test on YouTube this summer in the “Spore Ultimate Creature Creator Dance Off,” held by EA between June 17 and August 19.

Look for my creature, Pinkytuskosaurus (pictured), and give me a vote!

“Creature Creator” has a very small learning curve. All in all, after only a few hours fooling around with this digital creativity toy box, I cannot wait until the fully formed “Spore” hits store shelves on Sept. 7.