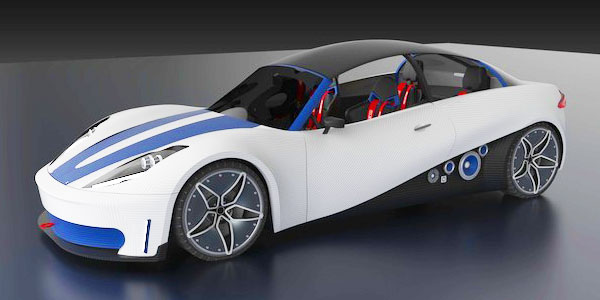 Local Motors this week unveiled designs for what it hopes will be the first consumer-ready 3D-printed electric cars.

The company plans to build two versions of the Reload Redacted vehicle, based on a design by engineer Kevin Lo, who took first place in the Project [REDACTED] competition.

Local Motors earlier this year demonstrated a concept vehicle at the Detroit Auto Show, where it printed out the entire body during the event. The resulting prototype, dubbed the “Strati,” was made up of fewer than 50 individual parts. The vehicle was equipped with an electric power train.

The first consumer-ready 3D-printed vehicles will debut in the first quarter of next year, and could be priced between US$18,000 and $30,000, according to Local Motors. These first vehicles won’t exactly be street-ready, however — they’ll be low-speed vehicles. A full-speed version that is fully street legal is set to follow.

Cars have been produced pretty much the same way — using stamping methods — for the past 100 years, he noted. However, the technology is now available to change this. Local Motors intends to rely on Direct Digital Manufacturing to produce automobiles.

“This is huge, as a custom car is typically an expensive luxury for people on MTV’s Cribs,” he told TechNewsWorld.

“Auto manufacturers produce standard cars en masse, leaving a stock of cars that may not be purchased,” Molitch-Hou pointed out. “Local Motors, however, can print a car whenever a car is ordered, as it only takes a few days to build one, and the BAAM (Big Area Additive Manufacturing) machine is really fast.”

The customization could go way beyond personal tastes and aesthetics.

“The geometry of a part can be optimized for energy and material costs,” Molitch-Hou suggested.

“The innards of the car might be printed in, say, a semi-hollow, honeycomb pattern, rather than as a completely solid part, so that it offers the same structural stability, but without the same amount of material being used,” he explained, “reducing the weight of the car, improving energy efficiency and using less material.”

Not Truly a 3D-Printed Car

Contrary to many overenthusiastic headlines, Local Motors is not planning to use 3D printing to manufacture the entire car.

“With their first 3D printed car, the Strati, they didn’t 3D print the entire car, but just the body,” noted Molitch-Hou.

In fact, the wheels, axles, motor, and everything else critical to the actual mechanics of the car were traditional components attached to the 3D-printed body, he said.

“Another important point is that the car body isn’t entirely 3D-printed, but is first printed and then milled,” Molitch-Hou remarked.

The 3D-printing process might not be all that appealing to those who desire a luxury auto’s fine lines and craftsmanship.

“Most extrusion 3D printing isn’t all that pretty to mainstream consumers,” Molitch-Hou observed. “There are discrete layers that you don’t see with injection molding or other traditional processes, so it’s not smooth and pretty like a Chevy Volt or something.”

Speed is another potential hurdle that could slow the adoption of 3D printing in auto production.

“The technology is simply not fast enough to make it feasible,” said Alex West, associate director of process automation and machinery at IHS.

“The sheer number of vehicles produced by Toyota, Honda or GM just is too great for 3D printing, and the material costs are too high,” he told TechNewsWorld.

For that reason, it is unlikely that the roads will be dominated by 3D-printed vehicles in the next 30 or even 40 years, but 3D printing will have a place in the auto industry.

“It will certainly be used with prototypes, which we are seeing already in other industries,” added West. “It will also be used in some parts where you can reduce weight, and that can help in terms of fuel efficiency and CO2 emissions.”

For the auto industry to full embrace 3D printing would require a paradigm shift, but it printing could play a significant role in the tooling process.

“There could be 3D-printed parts that aren’t used in the car itself, but could be used in the assembly process, where it helps shave off seconds on the line — and that translates into a substantial return on investment,” West noted.

Still, the major auto makers might be slow to adopt even that narrow use.

“Right now, the auto industry is dominated by a handful of giant manufacturers,” noted Molitch-Hou.

“We’ve seen how slow and clumsily big companies move, and their one-size-fits-all method of manufacturing is not a viable one in the long term,” he maintained. “They have to mass manufacture a handful of car types per year — and then next year they make small improvements to these models and release the next iteration.”

In may be in designing cars — not manufacturing them — that 3D printing exerts an industry-changing influence.

“3D printing enables rapid iteration based on customer feedback,” said Molitch-Hou. “If Local Motors’ first car doesn’t do well, they’ll receive feedback from their community, make changes to the design, and can instantly improve it with their next print. That’s the beauty of 3D printing.”