Google and Ford to Guzzle Data So Cars Can Sip Gas

You may think you know the shortest, quickest route to work, but wait till Google get its hands on your steering wheel. Smart technology may save you gas you didn’t even know you were wasting. 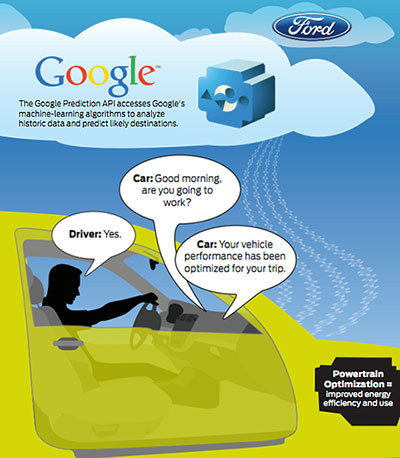 Ford is working with Google to harness the power of cloud computing and analytics in order to design technologies that will allow vehicles to independently attain optimal drivability and fuel efficiency. Ford researchers presented a conceptual case at the Google I/O developer conference, showing how the Google Prediction API, combined with Ford’s own predictive driver behavior data and analysis, could alter the performance of a plug-in hybrid.

The Google API can convert data into real-time predictions such as destination and time of departure. Ford hopes to use cloud-stored data to help a vehicle optimize itself and perform in the best manner possible for a predicted route.

In a theoretical situation, the technology would work by first creating a driver profile based on routes and times of travel. When starting the vehicle, Google Prediction would use this data and the current time and location to determine what steps to implement to achieve optimal driving performance — for example, by selecting an electric-only route to reduce gas consumption.

A large amount of computing power is necessary for this type of system, which is where the cloud comes in. Ford currently offers cloud-based services through Ford Sync, but the services so far have been focused on infotainment and navigation. This new technology goes further; it could help drivers comply with the tougher emissions standards emerging in some large European cities, for example, by switching to all-electric mode in certain areas.

Ford’s next step is adding more detail to driver profiles.

Your Car Is Getting Smarter Than You

The aim of the technology is to tweak the car’s performance based on driver, location, and time-of-day data processed in the cloud.

“The cloud really gives two key advantages: access to real-time data and access to a whole lot of information,” Ryan McGee, technical expert at Ford, told TechNewsWorld. “The application we are talking about is for a plug-in hybrid, which has the ability to drive without the engine on. The car has a big battery but also can operate with gasoline as a conventional car.”

Given that gas prices are likely to stay high, any help drivers can get to reduce consumption will be welcomed wholeheartedly. Plus, cities are under pressure to slash emissions. The cloud data tells the hybrid when it is optimal to switch to electric-only or gasoline.

“There are geographical areas that define when the engine should turn itself off,” said McGee. “Cities looking to cut down on emissions can define where to implement this technology. In the electric-only driving zones, the engine will stay off. On-board GPS accesses mapping data and the online database of electric driving zones.”

With Enough Data, I Can Move the World

The move by Google and Ford puts into practice data analytics that have been discussed for years. If you can gather enough data, you can adapt products to match actual use.

“This is an interesting example of what a lot of vendors have been talking about — the collection of mundane information such as people’s driver habits, their routes, how they drive their cars, the affect of their driving habits on the vehicle,” Charles King, principal analyst at Pund-IT told TechNewsWorld. “This is about amassing enough information so you have a profile that a vendor like Ford can use to improve its products.”

One aspect of the program still unknown is how the companies will persuade consumers to turn over their data — a subject that’s becoming increasingly touch for many.

“What will be interesting to see is whether or not Ford offers any incentives to drivers to participate in the program,” said King. “Will people be willing to do it just to improve Ford products down that line? Incentives may determine whether this is a success.”

The timing of the announcement is a tad awkward given that Google executives — among other tech leaders — have been called to Capitol Hill to answer some hard questions.

“One of the tenets of this program is going to be location tracking,” said King. “So it’s ironic this is announced at the time when Google executives are being queried in Senate hearings about tracking.”